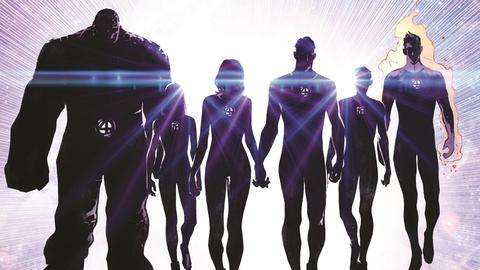 ComicBook.com reports one of the worst writers employed by Marvel Comics will making a departure from the Fantastic Four soon:

Though best known for being the primary architect of Amazing Spider-Man for years, celebrated Marvel Comics writer Dan Slott has been penning Marvel’s First Family, The Fantastic Four for the past…well, four years. Slotts’s run on the “World’s Greatest Comic Magazine” will officially conclude later this year with Fantastic Four #46. Unlike other wrap ups of major runs, Marvel seemingly debuted the news in an ad released in this week’s comics, hyping up the upcoming issue with the line: “Dan Slott’s groundbreaking run comes to a startling conclusion – with a revelation years in the making!” Bleeding Cool spotted it and have confirmed that the issue will be Slott’s last on the title.

What a relief, but if they intend to continue employing him, and he goes on to sully another notable Marvel/DC creation, then this news won’t have much meaning to it.

Slott’s work with the team has been filled with new angles for the group, some a long time coming and others retcons that have popped up out of nowhere. Among those are the revelation that Franklin Richards was no longer considered a mutant, revealing that his reality-altering power-set allowed him to believe that he was one. In addition a big change was made to the Fantastic Four’s origins and Johnny Storm was turned into a Permanent Human Torch, but most importantly, Ben Grimm finally got to marry Alicia Masters, something that happened within the first six issues of Slott taking over. This is the umpteenth example of using descriptions like “revelations” rather than “establishing” that Franklin, a fictional character, isn’t a mutant. In any case, it’s hugely dismaying, but no surprise, Slott would take some cheap path not all that different from when Marvel established Scarlet Witch and Quicksilver weren’t Magneto’s kids several years ago, or just retconned it all away for the sake of retcons. Bad writers like Slott are another reason whatever “changes” were made to the FF’s origins won’t age well.

And even after Slott stops writing FF, it’s clear the title sadly won’t improve under the kind of ownership it’s under today. I’ve said before and will again, that only after Marvel’s no longer part of a conglomerate will it ever be possible to make improvements.