“I pretty much fundamentally disagree with every choice you’ve made for this character.”
Mark Hamill as said to Star Wars The Last Jedi director Rian Johnson.

When Kathleen Kennedy was put in charge of Star Wars, unwelcome changes would be inevitable. According to Former Walt Disney World VP Dan Cockerell:

“Well, yesterday Bob Iger met with Kathleen Kennedy, who a lot of people may know is sort of George Lucas’ protege, and headed up Lucasfilm, And they had a conversation, a meeting, and Kathleen Kennedy, her point of view was there are way more Disney Star Wars stories ahead of us than behind us. So we really should think about, do we want to build a Tatooine and build what all of the fiftysomethings remember Star Wars as, or do we want to build something else which is going to appeal to all the upcoming generations who are going to know the new stories.”

This change to appeal to the upcoming generations would be imposed on more than just the Galaxy’s Edge theme park.  It would also be imposed on pre-existing characters such as Luke Skywalker. In February 2018, the official Star Wars YouTube channel published the following video:

Many were shocked to see this image of Luke’s face crossed out in red, hanging on a cubicle in the Lucasfilm offices.  Others felt that it was likely some internal office joke, and that it wasn’t to be taken seriously.

The owner of the cubicle, Justin Bolger, tweeted out that it was just a decorating style, Imperial Couture.  And that any concern over it amounted to nothing more than a conspiracy theory.  Co-host of That Star Wars Show, Anthony Carboni, joined in the laughter, mocking those who expressed concerns.

Then in August of 2019, the Disney insider WDW Pro who many now feel is the real deal, posted the following on the wdwmagic.com forums:

“Certain Lead individuals at Lucasfilm have a palpable disdain for Luke.”

Now why would that be?  Well, we all know how Lucasfilm associates feel about white males, and Luke certainly is a white male.  And given that Lucasfilm is currently infested with militant feminists, the fact that Luke is considered to be a patriarchal figure by some may also come into play.  And then you had the arguments about how great it was to democratize the force for everyone, and not restrict it to a family bloodline.  So there are probably ridiculous issues with what SJWs might refer to as “privilege” in the character.

Or maybe the character of Luke Skywalker was altered in an effort to blur the lines of presumed assumptions… Whatever the reason was, that “palpable disdain for Luke” would manifest in Lucasfilm’s media publications over and over again.  Most are familiar with the awful Disney Trilogy of movies which have now come and gone.  Luke Skywalker was barely in the movies, a fact that the cast mocked right in front of Mark Hamill.

But they had to use the character to some extent to rope in the old fan base into buying movie tickets.  George Lucas’s treatments for the Sequel Trilogy depicted a Luke Skywalker who had gone on sabbatical to seek enlightenment through meditation.  But we didn’t get sabbatical Luke.  We got vagrant Jake instead. 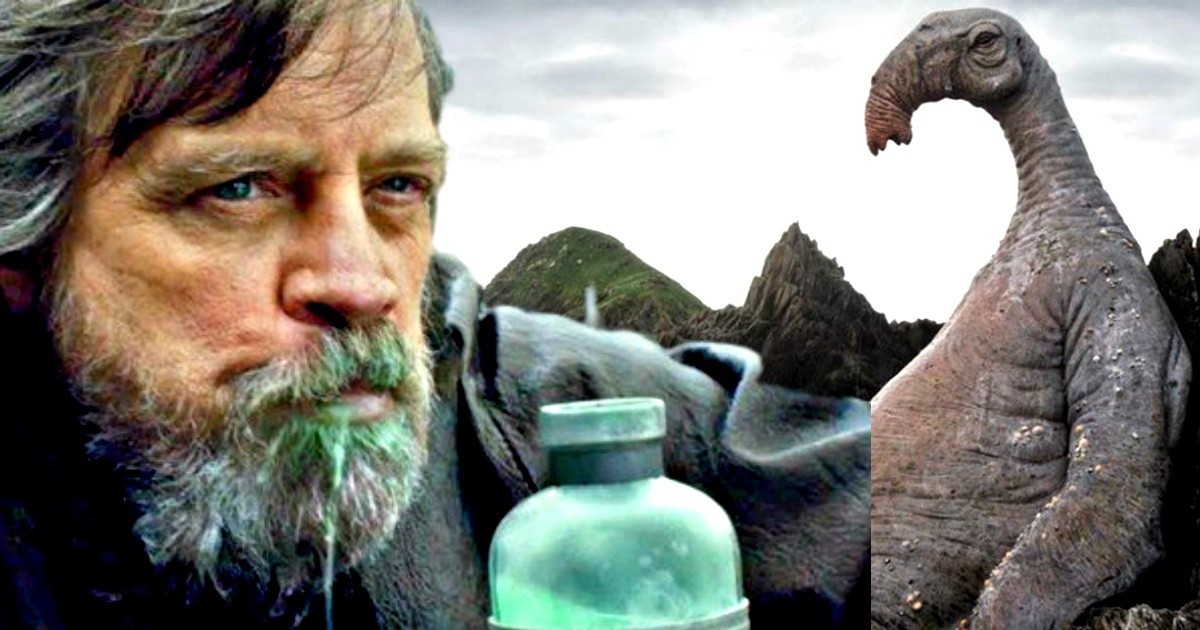 Let’s examine the layers of nuanced meaning in The Last Jedi’s famous alien nipple milking sequence.  What deep messages was this display meant to convey to the audience?

The correct answer is D, and that’s supported by the words of Dave Filoni, who suggested shifting the focus from Luke to Leia as the Obi-Wan figure.  A shift from patriarchal, to matriarchal.  According to The Art of the Rise of Skywalker, Filoni said at a meeting:

There’s a potential idea there about the matriarchy coming back and subverting what has always been dominantly patriarchal in male heroes, Zeus, Hercules, and everything else.”

The Super-intriguing setup in Empire, “That boy is our only hope.” “No, there is another” I felt cheated in Jedi that this really didn’t go anywhere.  But maybe Yoda is really talking about what happens with Leia in VIII, thirty years in the future.

To which Dave Filoni replied:

“I love that.  We should shift it so Leia is the Obi-Wan of the entire Trilogy.

It’s dangerous because it makes it so about the women of Star Wars.  Something to me says that’s right.

There is something happening culturally.  You look at birth, regeneration, the world itself needing healing: All of those things are emblematic of the ‘mother’ character in myth.  They are all matriarchal things, Mother Earth itself, global warming is a hot topic.”

There’s much more, and the case is made in the following video: