Unclue Richie’s website is wondering what Grant Morrison is up to based on the following panels from a Green Lantern annual Morrison wrote, featuring the return of the similarly named cousin of Hal Jordan from the late 1970s introduced by Denny O’Neil at the time GL was continuing his partnership with Green Arrow (and to some extent, Black Canary), in the 100th issue of the 2nd volume: 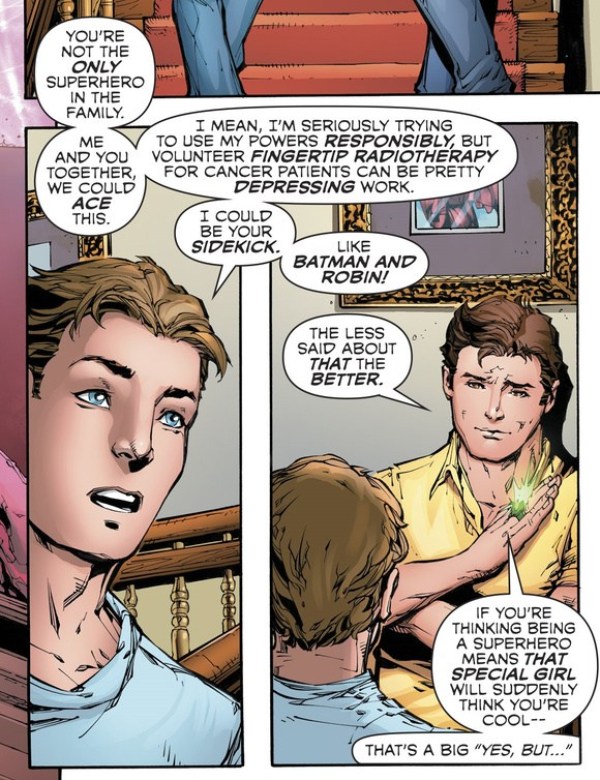 Maybe Morrison’s just pulling everyone’s leg, as he may have done in a few past stories he wrote, such as a crude “joke” he put in New X-Men in the early 2000s, where Beast tried to discourage Trish Tilby from spending time with him by telling her “In fact, I think I may be gay”, which was very tasteless. Nevertheless, based on how sensationalistic Morrison could be at times in the past, that’s why we shouldn’t be too surprised if he went the distance this time with a minor character because he thought he could get away with it more easily. But all he’s done then is abuse past creations better writers worked hard to develop, and if the following panel from one of his Action Comics backup stories says anything: 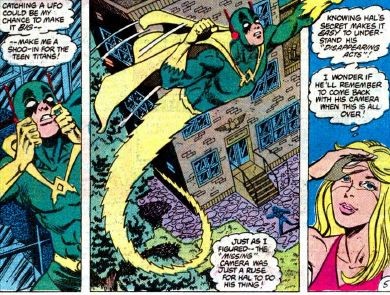 Harold Jordan, who later changed his codename from Air Wave to Maser at one point, did have a girlfriend in saner times.

These sexual orientation switcheroo stories for the sake of publicity are getting very boring already, and it’s high time they stopped.

And this is hardly the only story Morrison’s written in questionable taste in this volume. In the 5th issue, he put Hal through the following, including something that should’ve been put to bed long ago:

Something is going on with Hal Jordan. He killed a criminal in cold blood, an offense that should have been enough to get him locked away. However, the Green Lantern has gone on the run. Now he’s courting the very enemy that threatens to rival his own organization — the Blackstars.

In The Green Lantern #5, Hal is recruited by the enemy and takes back a familiar mantle he once used in his supervillain days. It would seem that Grant Morrison and Liam Sharp are setting Hal up for a big fall, except for the fact that not everything is how it appears to be.

[…] Adopting the name Parallax, Hal Jordan has seemingly joined the dark side. Green Lantern fans will understand the importance of this name and how dangerous it is for him to start using it again. That is, except for the fact that it is a lie. It is then revealed that this is all going according to the Guardians’ plans. Hal was, in fact, tasked with infiltrating the Blackstars, becoming a member and gaining access to their leader, Controller Mu.

Maybe not everything’s as it seems, but if he’s depicted killing a criminal in cold blood rather than with a heavy heart that he’d have to kill at all, that’s honestly insulting to the intellect, as it is that he’d take up the name of a role he should never have been plunged into a quarter century ago. But, if memory serves, Morrison made use of the Phoenix cliche, another storyline that’s been regurgitated far too often. This is what’s disturbing about comicdom and where it sank to – today’s contributors are obsessed with horror-laced storylines of the past, regardless of the quality. It makes little difference whether Hal’s not been turned evil again. What matters is that Parallax was such an abominable tale leading into Zero Hour that using it again for the zillionth time only brings us back to an era that should’ve been left forgotten. Besides, it wouldn’t be the first time Hal killed: at the end of the 2nd volume in 1988, along with a whole crowd of GLs, Hal and company put Sinestro to death for his crimes against many innocents, as was seen in some of the last issues. And that was hardly something anybody felt great about doing there.

Morrison also did the following in the 7th issue with a certain villain who first turned up in Hal Jordan’s ring during the Silver Age, namely putting him back in the ring again:

…Told through a story which consists largely of prose and rhyme, Morrison’s tale of Hal’s return challenges the reader to piece the puzzle along with our protagonist as Hal wanders the Emerald Sands looking for answers. Joining Hal is Pengowirr, a new character whose name is a clever acronym for her deepest secret. Hal and Pengowirr search for Myrwhydden (whose spelling has been corrected from last issue) as the Emerald Sands, and Pengowirr herself, are slowly dying.

Seems Morrison ignored what transpired by the time the 2nd volume of GL ended in 1988. By then, Myrwhydden had been removed from the power ring interiors and confined instead to Oa’s prison cells for intergalactic criminals. I assume Morrison thought this perfect to ignore, simply because Myrwhydden had largely vanished for nearly 30 years until now. Given how cynical Morrison’s often been, that’s why this GL volume would be best forgotten, especially if he’s going to make such tasteless use of past characters he didn’t create. 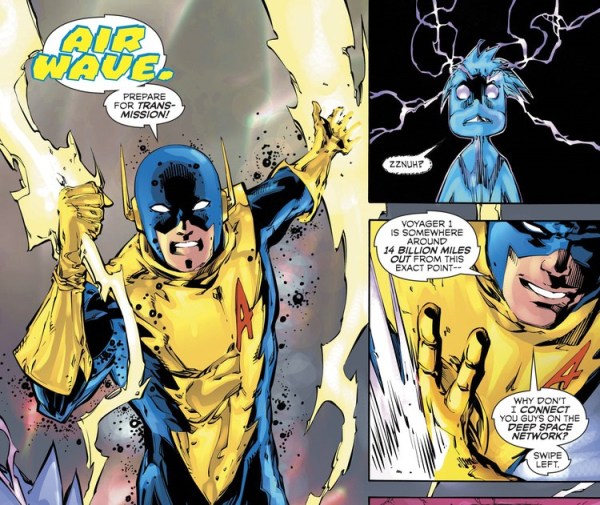