Did Denny O’Neil Help Comics “Get Woke” and Was That a Good Thing?

The Saint Louis Post-Dispatch wrote an article about the career of the now late Denny O’Neil, who’d been active at least till the turn of the century, and auctions taking place for ownership of his estate. But there’s some slang at the beginning I find annoying:

Collectors are legion in the comic book universe.

So the eagle eyes and mouse-clicking fingers of many fantasy fiction fans will be monitoring an online auction of items from the estate of a man who may be the most influential St. Louisan in the history of the art form: Dennis “Denny” O’Neil — a northside kid who helped comic books “get woke.”

I don’t find it appealing they’d use what’s come to be a most overbearing phrase among the far-left, “wokeness”, and however O’Neil did his writing, it certainly wasn’t in the way most leftists today approach these issues, which is extremely one-sided and very politically correct, far more than O’Neil ever was. It may not have been considered an issue during the 70s, but today, anti-white racism is a very concerning issue, yet most on the left don’t even dwell upon it. Here’s more coming from 2 interviewees:

Both men point to his work with artist Neal Adams in the Bronze Age of Comics (generally the 1970s) as being a turning point — when comic books developed a social conscience.

“Their ‘Green Lantern/Green Arrow’ issues (in 1970) made everyone stop and pay attention,” Phoenix said. “It had a huge impact on the entire industry; the shot across the bow.”

“Story lines started dealing more with social issues like racism and drug addiction, and in a very realistic way,” Phoenix said, noting that one issue dealt with the heroin addiction of Speedy, Green Arrow’s sidekick. 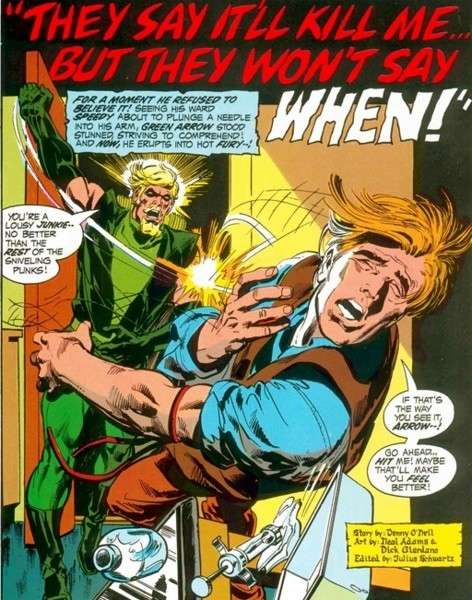 Yes, but today, it’s less clear if drug abuse is still considered a valid issue, and let’s remember that horrible time when J.T. Krul wrote a story denigrating Roy Harper, and insulting that earlier storyline. Also, if we were to consider what’s happening in Oregon today, where the state authorities have now made it easier to get off the hook for drug possession, and Washington looks to be following suit, that’s why one can validly wonder if such stories in the long run were a tragic failure. Especially if nobody at these MSM outlets has any comment to make on what’s been occurring this past decade that can be considered advocating the opposite of what the GL/GA stories were combatting.

Zurzolo said those 10 “Green Lantern/Green Arrow” issues “were head and shoulders above the rest.”

“You had this pair of superheroes, one conservative (Green Lantern) and one liberal, taking a road trip and confronting problems like racism, religion, social inequality,” Zurzolo said.

“He created an archetype for future characters,” he said.

If he did, as Stan Lee also may have (let’s remember he paved the way for some of this with his Spider-Man story shortly before O’Neil’s GL/GA issues), it’s uncertain it lasted. Or, it’s all dealt with from an entirely far-left perspective these days, that doesn’t allow for a right-leaning view of anything. Just look at the blacklisting of conservatives like Gina Carano from the Mandalorian, something that’ll understandably prompt some people to reevaluate what they think of the TV show. By which definition, social inequality takes on a modern meaning. And in those Bronze Age stories, Oliver Queen wasn’t portrayed as flawless any more than Hal Jordan, but today, it could be depicted a lot differently.

After a stint in the Navy, O’Neil worked as a reporter at a daily newspaper in Cape Girardeau, where he also wrote comic book industry stories for his own amusement, and to fill newsprint space.

But those articles drew the attention of Roy Thomas, a native of nearby Jackson, Missouri, who just happened to be second-in-command at Marvel Comics to the legendary Stan Lee.

With the backing of Thomas, O’Neil was hired by Marvel in 1966 and began his rise in the ranks of writers, wielding his pen for Marvel, then DC, then back to Marvel, and then back to DC.

After changing the game with Adams in 1970, the pair moved on to revamp “Batman” in the early 1970s. “That also was some ground-breaking stuff,” Zurzolo said.

Be that as it may, it was far from the kind of extreme PC viewpoint you see forced onto the characters by modern writers, who believe man-hating and sex-negative positions are the best applied. In those days, characters espousing what could be described as a “feminist” position were more interested in getting men to consider women equal partners in a relationship, not acting as though they were totally incapable of taking care of themselves in specific situations, and respecting if they had an independent viewpoint. And while O’Neil may have done military service, today there’s a lot less respect for that kind of career than before coming from the left-wing.

And both Zurzolo and Phoenix noted that O’Neil came up with the classic superhero name Optimus Prime while working on a new series, “Transformers,” in the early 1980s.

Yep, if there was any toy robo-vehicle in the line from Hasbro he’s credited with developing, it’s the main leader of the Autobots, though Bob Budiansky was credited with the majority. O’Neil also did some editing for the GI Joe line in its first few years, before returning to DC to become editor for the Batman franchise, and continued to occasionally write more stories for it too. 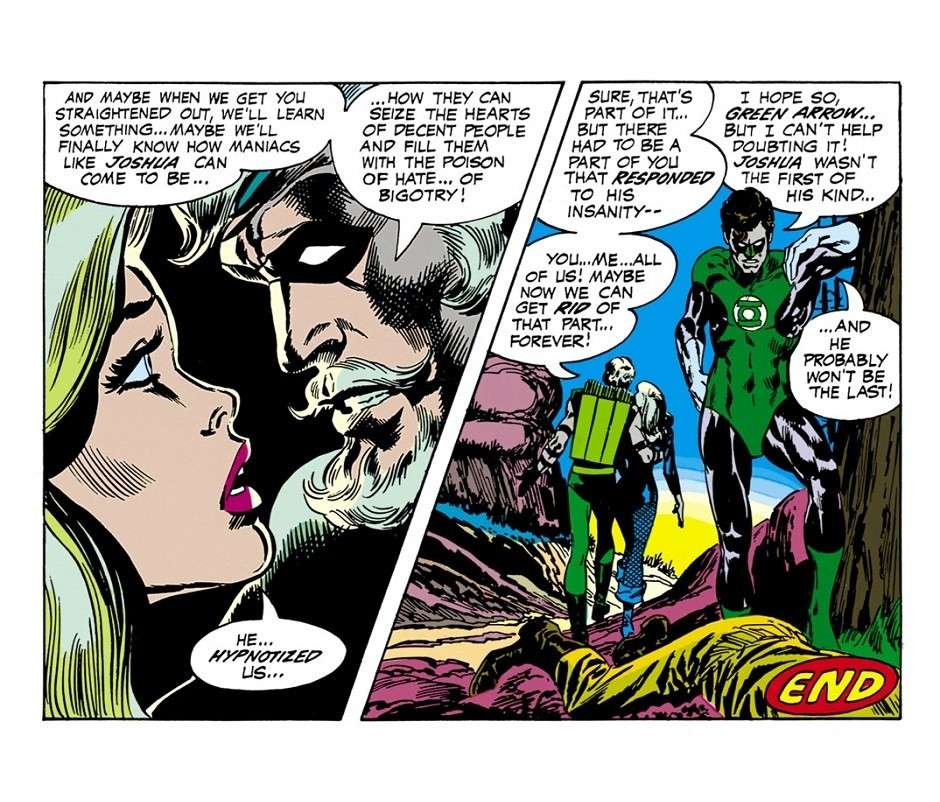 But it’s decidedly inappropriate that the paper describe his work as “woke”. Rather, what he was doing, much like Stan Lee, was making an effort to tackle more real world issues in comicdom, take up certain challenging subjects reflected, specifically, by the times and era, and thus make it more possible for successive writers and artists to do the same. That’s not saying I agree with every viewpoint O’Neil carried, but to think he was anything like today’s leftists is decidedly inaccurate.

Using a PC term like “woke” only dumbs down the focus, especially at a time when political correctness has made a mockery out of the very issues O’Neil was looking over when he was around at the time. Unfortunately, it’s unlikely the press will quit using such ludicrous slang, and additionally unlikely they’ll honor O’Neil – and Lee – for shedding light on challenging issues like drug addiction and trafficking, seeing where things have gotten today.