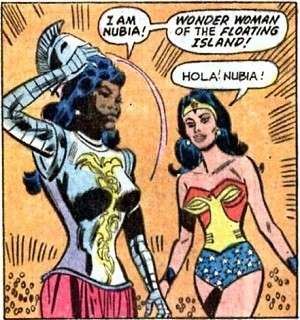 The Indiana Gazette published one of Andrew Smith’s pretentious Captain Comics columns, here focusing on graphic novels he considers relevant, and one of them happens to be a young adult adaptation of a Black Amazon who first appeared in Wonder Woman in the early 1970s, Nubia, in a GN subtitled “Real One”, that’s also written by somebody who once resorted to incitement against another novelist: 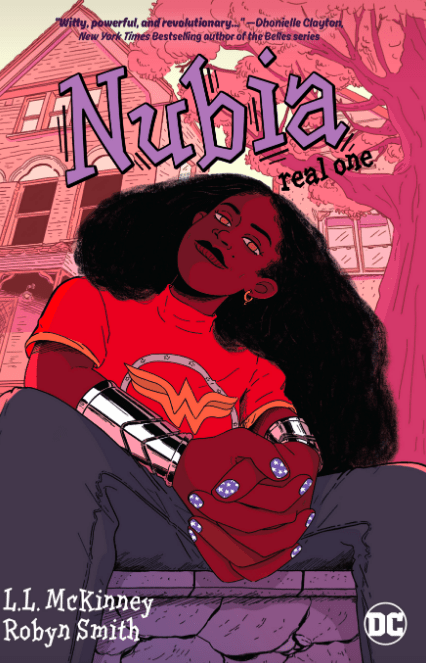 When the Black Wonder Woman, “Nubia of the Floating Isle,” was introduced in 1973, your humble narrator immediately pronounced her superfluous. After all, she was identical (except for being Black) to the one we already had.

Her existence was also annoying, in that it re-wrote comics history. Heresy!

Nubia’s origin, as we learned in 1973, was that she was sculpted from clay by Queen Hippolyta at the same time as baby Diana, only with darker clay. But after being given the same divine gifts as Wonder Woman and coming to life, she was kidnapped by Mars and raised on the “Floating Isle.”

Somehow, in all the stories since Wonder Woman’s first appearance in 1941, Hippolyta had failed to mention that Diana had a twin out there somewhere, being trained to hate her by the God of War. Mighty forgetful of you, your highness.

Gee, this is awfully rich coming from somebody who’s served in the past as an apologist for – and glossed over – stories from both DC and Marvel alike that rewrote history in the worst ways possible since the turn of the century.

But never mind, since the Crisis on Infinite Earths (1985-1986) erased that version of Nubia and all the clay nonsense anyway. (Wonder Woman’s origin now is that she’s always been the daughter of Hippolyta and Zeus, and the whole Galatea business was just a smokescreen to fool the jealous and vindictive Hera.) The few times the character has appeared since the ’80s, she’s been significantly younger than Wonder Woman, and has an entirely different origin. Now you’re talking!

Especially since, in today’s world, almost any iteration of Nubia is virtually a necessity. Comic books have told us for 80 years what it’s like to grow up super-powered and white. “Nubia” shows us super-powers on the other side of the color divide — and it ain’t pretty.

Hmm, in that case, why was he telling us Nubia was annoying and superfluous in her existence? Why, come to think of it, if this story is giving us a look at superpowers from a dark perspective – not unlike the vision that’s become far too mandatory in Batman – surely that doesn’t throw the story in focus into a category basically the same as a lot of what’s pushed down our throats on the market today? Why not emphasize optimism in a story spotlighting a Black protagonist? 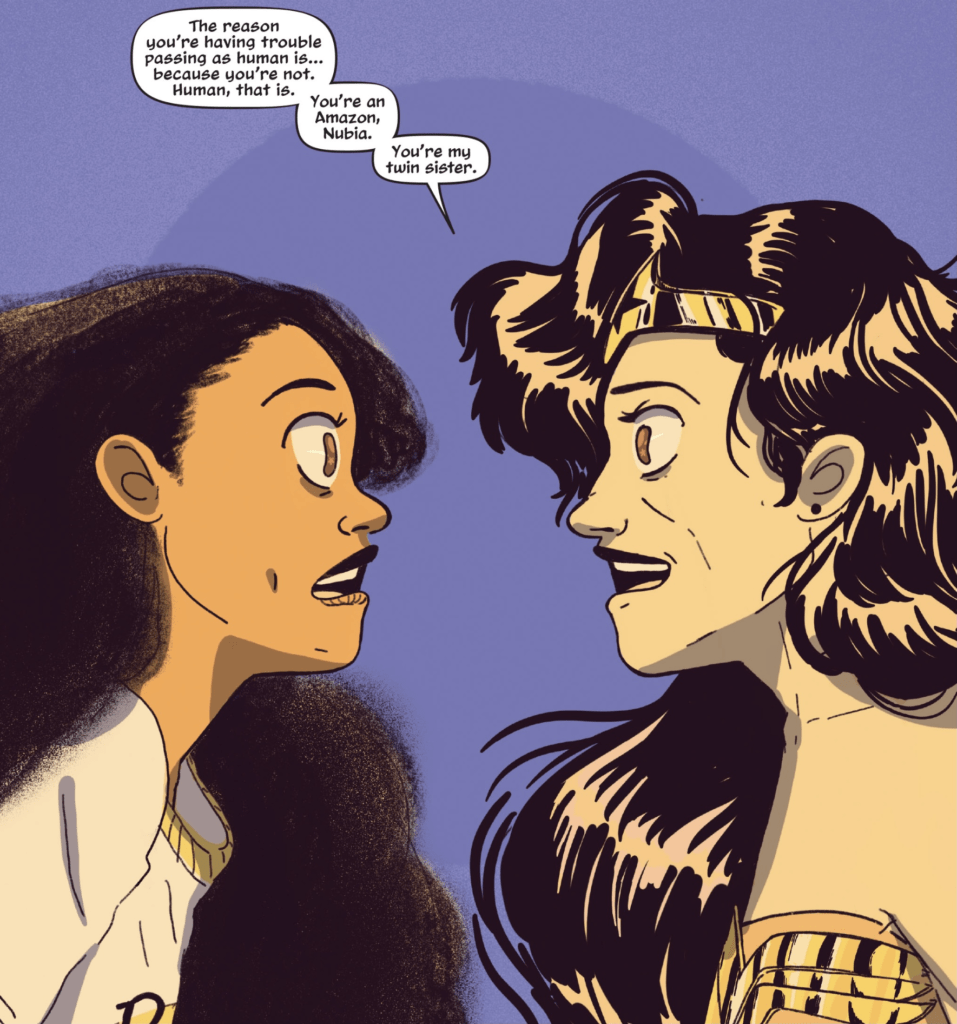 The following seemingly assures it does, but the political angle turning up puts that into question:

This Nubia is a teenager who has to hide her powers, because she and her two Moms (one’s an Amazon) have a pretty good idea what would happen to her if she was “outed” as a powered person of color. “Cops don’t see Black kids as kids,” warns one of them.

But this story, by young adult author L.L. McKinney, is no downer. Yes, Nubia has challenges, especially because of the color of her skin. But this coming-of-age tale depicts her learning to meet those challenges with wit and heart. The importance of love — her friends; her parents; her first, fumbling romance — is paramount, as it rightly should be in a Wonder Woman story.

I was less enamored of Robyn Smith’s cartoonish art style at first, but by the end of the book decided it actually enhanced the story. The cartoony style removed some sense of threat, which otherwise might be overwhelming. And it’s certainly the right milieu for these young teens as they begin the trek to adulthood.

Say, wasn’t McKinney the leading inciter against Amelie Wen Zhao, over alleged “racism” in her Blood Heir novel? Zhao was wise in the end not to self-censor, as has become an alarming case over the past decade (though questions still remain whether she did omit any material the thugs attacked her over), but now, it would seem McKinney’s being rewarded over offensive behavior she could’ve avoided. All of which goes unmentioned in this earlier KCTV5 article:

A Kansas City author is making her debut in the world of comic books and developing storylines that help bring inclusiveness and diversity to the genre.

As if there were never any such thing before. The way these PC ideologues keep making it look historically otherwise never ceases to stupefy me.

Inside the comic book world, new authors are writing new chapters. LL McKinney is one such author and her project will be hitting the shelves this month.

“This is my first graphic novel, my first foray into the comic book world,” she said.

McKinney writes young adult novels from her home in the Kansas City area. She’s always been a fan of superheroes, but knows the comic book industry needs more representation when it comes to people of color.

“If you need to be told why it’s important, then I got nothing for you,” she said. “The rest of us are moving on.”

Would that be from the time she incited against Zhao? I don’t know, but I do know it sounds absurd to say she’s got “nothing” to tell about the “importance” of a subject that’s long been dealt with, from perspectives far less noxious than she goes by. Her politics are clearly coloring her writing, to the point she won’t even discuss them.

“When I was given the opportunity to do a superhero story I was like, ‘I’m going to give those kids this hero that is impacted by the things that impact their lives,’” McKinney said.

And what would those be? Identity politics? No mention made of that, I see.

It’s a story she hopes will influence the next generation of readers and writers.

“These kids need to be protected and loved and given an opportunity to come into who they are without the dangers placed on them in this world, which are absolutely unnecessary,” McKinney said.

Would those dangers include rabid leftism, and the horrors inflicted by BLM and Antifa? If it’s only White (and Asian) society she’s concerned about, and not whatever happens within a specific community other than that, she’s not getting anywhere. 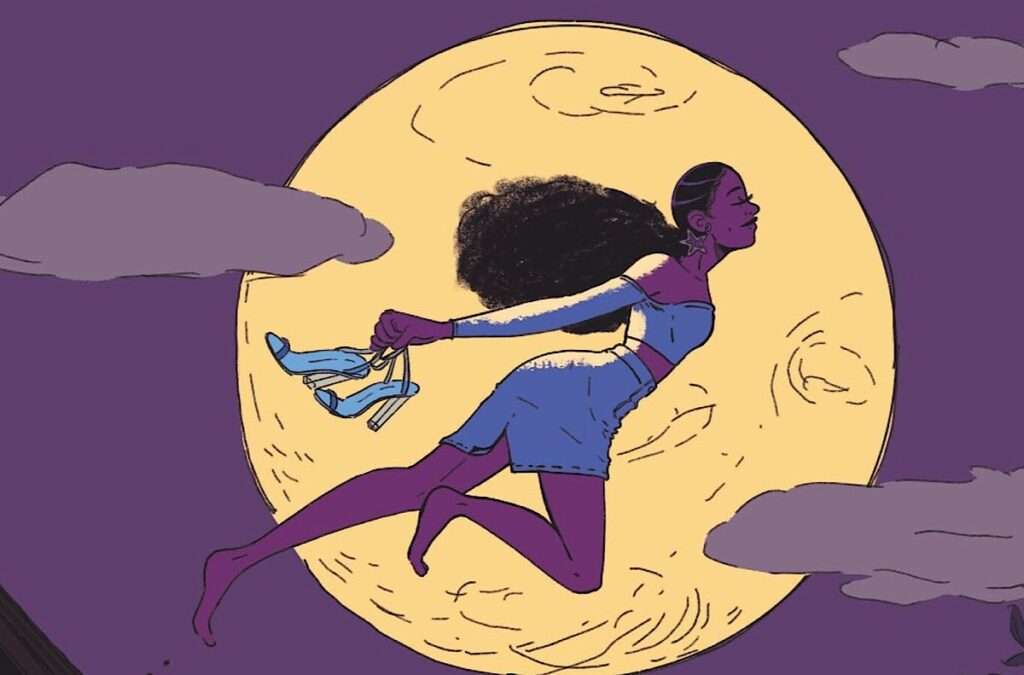 Even in this interview at the Nerd Daily, she remains elusive:

Now tell us a little more! What can readers expect?

Readers can expect a warm and funny coming of age story that doesn’t shy away from some of the harsh realities certain communities have to face. There’s super powers and heroes and shenanigans and parties! But there’s also very real moments that reflect the times. But the best part is they can expect a story for and about kids who now get to see themselves reflected in a hero who’s connected to something as powerful as the legacy of Wonder Woman.

Much as I’d like to see the sense of warmth and humor as a positive sign, the politics turning up in the book ruin everything, not the least being the aforementioned citation of “cops”. Does that not suggest this is gearing up to be something akin to “Defund Police” propaganda?

And Smith sure sets an example as a supposedly “dedicated” reader who says he bore a low opinion of Nubia, yet when she’s put to use in a left-wing social justice-themed young adult GN, suddenly, she’s valid, based on ideological influence, not artistic merit. It doesn’t take much to guess Nubia will be subject to some pretty bad use for the sake of political propaganda, all by people who don’t deserve the job. How many more of these dreadful GNs written by YA authors is DC going to put out? I don’t know, but it’s already apparent they’re built on some pretty awful foundations.