Darth Vader Actor Dunks on Abrams’ The Rise of Skywalker

Fans may know C. Andew Nelson as the actor who played Darth Vader in the Special Editions, and a several Lucasarts Star Wars video games.  But according to Wookieepedia, this Lucasfilm alumni has many other accomplishments to his credit:

Nelson left LucasArts in 1998 to join the effects team at ILM where he was a compositor, rotoscoper, matte painter, and texture artist. His work at ILM includes Star Wars: Episode I The Phantom Menace, Galaxy Quest, The Adventures of Rocky & Bullwinkle, The Perfect Storm, Jurassic Park III, The Time Machine, and Star Wars: Episode II Attack of the Clones.

Mr. Nelson has a thing or two to say about JJ Abram’s filmmaking over on his Facebook page. 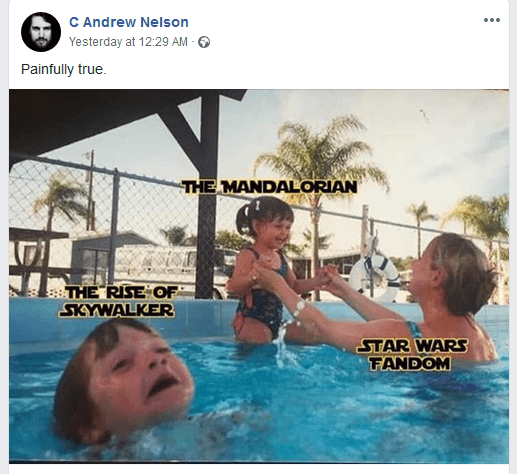