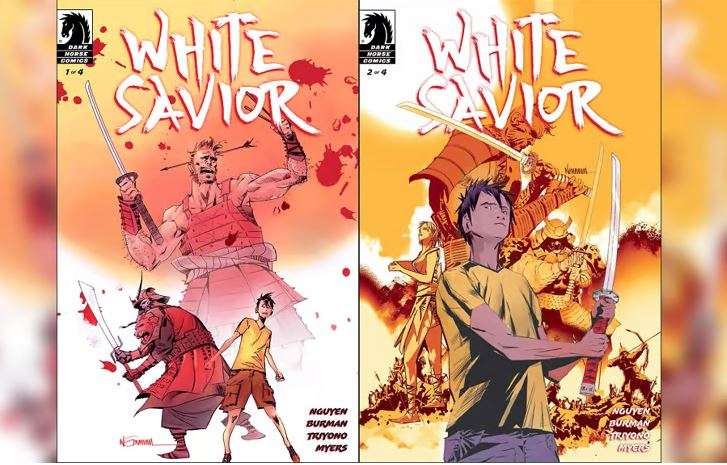 Next Shark interviewed artist Nguyen, who’s created a comic titled “White Savior”, which is said to be a satire about white heroes saving societies of different races, but seems more like an insult to the very notion of a white hero saving the day. They begin with the story’s premise:

NextShark spoke with comic book artist Eric Nguyen, co-creator of Dark Horse’s newest comic “White Savior,” about the Hollywood tropes the story satirizes, the prevalence of Asian stereotypes in new media and the state of Asian representation in comics today.

Written by Nguyen and Scott Burman, “White Savior” follows Todd Parker, an Asian American film history teacher who is suddenly sent back in time to feudal Japan. Upon his arrival, he quickly realizes that the local villagers have put their faith in an incompetent “white savior” who will surely lead them to their doom unless Todd can stop him.

So he worked on Al Ewing’s politicized atrocity in the Hulk too, huh? That aside, this is awfully cheap to pen a “satire” of stories where white adventurers save Asian communities, instead of reversing the roles, which could even include, say, an Asian hero romancing a white lady. What’s so hard about that? If you know where to look in multimedia from Japan, there are examples of Asian characters acting as saviors to any and all of humanity, and even romancing non-Asian women. Yet Nguyen seems like the kind of person disinterested in foreign storytelling as a wellspring, and as a result, his argument doesn’t go over well. It continues:

What inspired the story’s concept?

It all started when that movie “The Great Wall” with Matt Damon came out, and Constance Wu famously talked about how Asians didn’t need a white guy to swoop in and save us. And Scott and I were joking around and said, “What if the white guy in this movie was an idiot who actually made things worse for the people he was trying to save?” We started laughing about it, and literally, that’s where the idea came from.

I wish it was a more inspiring story of us thinking about what we could do to promote representation, but honestly, the idea came from a simple aside, and as we started writing, we realized very early on how important the subject matter was. And I think what makes our book stand out is that we put just as much emphasis on the story being funny and action-packed as we do on the important message we’re trying to convey.

On this note, do Nguyen’s ideas of what counts as “representation” include creating characters with Armenian ancestry like Mannix? And, what’s so wrong with the idea of a white savior coming to the aid of Asians in distress? By that logic, it would be wrong for an Asian savior to do the same by helping whites in distress.

Was the plot/humor inspired by any other comics you’ve read or worked on?

I don’t know if it was inspired by what I worked on as much as it’s inspired by what’s out there. The white savior trope has been around forever. Heroes like Iron Fist, the only white guy in a land of Asians who, of course, is a better martial artist than all the other Asians. Or any samurai movie where a white outsider rescues an Asian village. So we wanted to bring light to the problematic nature of these stories, but do it in a way where humor and satire were at the forefront. And that’s the ultimate goal of our comic — to bring people together and laugh at the insanity and ignorance of the past, while still recognizing the progress that needs to be made in the future.

Oh, please. Is that meant to suggest Shang Chi wasn’t portrayed as good a martial artist in his own way? Or that they couldn’t possibly create an Asian man who’s just as formidable? Maybe the most dismaying part of the above is how it implies Nguyen’s the kind of guy who can’t look beyond Marvel/DC, and acts as though all this only matters when applied to the Big Two. What a farce indeed.

Why a time travel story?

Good question. We never thought about that. I think it’s because we wanted somebody who can essentially comment on the ridiculous nature of “white savior” stories from an outsider’s perspective. So if Todd, our main character, is from the present and travels back to feudal Japan, he already knows what’s going to happen; he knows for a fact that the “white savior” is not the hero the villagers believe he is.

And we realized a lot of the comedy in our story is from Todd knowing the truth but nobody believing him because the characters themselves are actual relics of the past. They, like society at the time, still believe in that “white savior” myth. So it’s literally the future coming to terms with the past. And the main character is essentially a modern man continuously shaking his head at the misconceived notions of the past.

What’s annoying is how the tale sounds like it implies that, because the savior in question is white, that makes him incompetent. And that’s very damaging. As a result, it’s supremely insulting to sell this under the guise of “satire”. After all, for every good satire, there’s also a bad one. And this is beginning to sound like the latter.

As “White Savior” deals with Asian stereotypes, do you feel these stereotypes are present in the comic book industry?

Well, the comics industry is a massive industry. And [it’s] only getting bigger with every comic now being made into a movie. But you’ve got a lot of great Asian talent working in comics — Jim Lee is in charge of DC, Cliff Chiang, Marjorie Liu, Stan Sakai, Greg Pak, Frank Cho, there’s a ton. And the last couple years have brought us first-class Asian stories like George Takei’s ‘They Called Us Enemy’ or ‘The Good Asian,’ written by my old friend Pornsak Pichetshote. So you’ve got a lot of comic companies, especially Marvel, DC and Dark Horse, championing diversity with both their talent and characters.

That being said, some of these characters are legacy characters who have been around for ages. And when they were created, they did enforce those stereotypes. So the question is, do you expand on these well-known characters and give them more dimension, or do you create new characters and hope they resonate with audiences?

More to the point, you do your best to write with merit, and apply said merit to the new characters you’re creating. All that and race aside, Takei’s become such a far-leftist ideologue in the past decade, that whatever he’s had written doesn’t resonate. And Lee? He’s such a far-left ideologue himself, that to bring him up is such a snoozer.

What’s your opinion on comic book characters being rewritten or reintroduced as Asian?

This is a tricky one, because creating a new character fans can get behind is incredibly difficult, regardless of their race. Same with creating a new story. So sometimes, we see new Asian characters — and I’m not just going to say Asian, I’m going to include all under-represented groups in this — you see new minority characters being introduced, and the stories, for one reason or another, don’t click with the audiences. That being said, you’ve got creators like Brian Bendis, who created Miles Morales. A Black/Puerto Rican Spider-Man. Upon first hearing it, it sounds gimmicky, but in the hands of a master like Bendis, Miles became a centerpiece Marvel character, based on an old one, that will last for generations to come.

Ah, what’s this, is he alluding to the Muslim Ms. Marvel, who was practically developed by a committee as a propaganda tool? This too says all you need to know something’s wrong with the guy’s way of thinking. Same goes for his laughable citation of Bendis, the same overrated writer who wronged Scarlet Witch in Avengers: Disassembled. As for not reading stories with new characters, there’s strong suggestions he’s alluding to – what else? – the Big Two’s approach, which would mean he’s got no qualms with how established white characters were harmed before being replaced by characters of different race in the costumes. As for creating new characters who resonate with an audience, the problem is poor marketing and lack of interest by the marketers themselves. Hasn’t that ever occurred to Mr. Nguyen? And then, when asked what his favorite characters are, he says:

But back to the character question — I think my favorite Asian characters are those whose personalities don’t rely on those tropes we were talking about before. A prime example is Jimmy Woo — in the comics, he was one of the first Asian heroes. And he’s just this super cool, cunning secret agent. In the MCU, he’s played by Randall Park, and how can you not love Randall Park? But the fact that Jimmy Woo is a secret agent first and Asian guy second, I think that appeals to me. Another favorite is Ms. Marvel, who I mentioned earlier — probably one of the best new characters in the last 10 years. Amadeus Cho, Jubilee, Katana, Armor, Silver Samurai. So many more, but also, not anywhere close to enough.

If memory serves, Amadeus Cho was the Asian Hulk from several years ago, who was even written exclaiming “totally awesome Hulk”, as though stereotypical dialogue weren’t absurd? And those stories sure didn’t draw interest from many people. Maybe if you’d created a variation on the Hulk as part of a creator-owned product, it could be getting somewhere, but this has long become too much, because the racial background is all it’s about. And then look what Nguyen brings up towards the end:

What would you like to see more of in comics?

Asian characters whose personalities aren’t based entirely on them being Asian. Additionally, Scott and I want to champion characters who we feel never got their due. One of our dream projects is to update and revamp a fairly unknown DC superhero called the Heckler, who we think has a lot of mainstream potential.

Well in that case, here’s two things to consider: one, some of the Asian characters introduced in the past two decades, like Ryan Choi, the Asian Atom at DC, were marketed based entirely on their racial background, not story merit. And two, if you believe there’s characters who never got their due, what about characters who were originally white, like Ray Palmer and Jean Loring? Why, what about the Golden Age Hawkman and Hawkgirl? If Nguyen’s got no interest in building them up, in contrast to characters of Asian/Black/Latino background, I’m not sure what his point is. One can only wonder what their plans are for this minor DC character called the Heckler. If that’s going to be built on wokery, rather than genuine merit, we’re getting nowhere fast.

It’s very lazy to craft a story that’s more about depicting a “white savior” as a bungler than about an Asian/Black/Latino hero who saves a white community from evil entities instead. To see Mr. Nguyen go for such a cheap path is disappointing, as are his ideological perspectives.