Is February the month when unhinged SJWs decide to start SWATting their imagined enemies. First is was Alterna Comics publisher Peter Simeti and hisSWATting experience just last week. After the dust settled, he had this to say in response:

If you see someone tweeting out something disgusting/suspicious/incredulous/boastful/questionable in regards to the SWATting incident that occurred to me on the night of the 12th — please send me the screenshot if possible so I can inform local law enforcement, thank you.

The false accusations, defamation, hate, and threats that come my way on a near daily basis, whether it be on here, facebook, email, etc. — that stuff emboldens people that are in the wrong state of mind, to do something extreme.
Something violent.
STOP inciting violence.

Who do you think is “inciting violence” against Alterna Comics? It isn’t ComicsGate fans or comic book critics. Could it have anything to do with professional comics creators who regularly engage in offensive behavior? Could they risk inciting violence of the sort that people like Billy Tucci and Peter Simeti recently encountered?

For those that have spent over a year harassing me for being neutral in this ridiculousness called comicsgate and are now using my words of neutrality as a weapon and a shield against people who are passionately defending me — I see what you’re doing — and you’re disgusting.

Just over a week later, Edwin Boyette, a Youtube personality who frequently comments on contemporary political events, popular culture, identity groups and comic books and the industry, was just swatted over the weekend.

Someone just tried to “SWAT” the wife and I. We are absolutely fine the @honolulupolice were absolutely professional! pic.twitter.com/eltGvYE1fh

Swatting is the act of calling 911 and lying about someone doing something really bad, like holding a hostage, to get dispatchers to send police officers — and particularly a SWAT team — to a victim’s location. The term gets its name from SWAT teams, which are heavily armed, militarized police units used to raid homes, usually for drug searches.

As Micah wrote last week, there have been multiple times when victims of SWATting have been injured, or even killed. Is this the intent of the perpetrators of these crimes? What exactly is inspiring this stuff? Could the virulent taunts and tweets of highly-esteemed comic book pros, the very pros Edwin has criticized, be the stuff that inspires thugs to pull dangerous stunts like this? 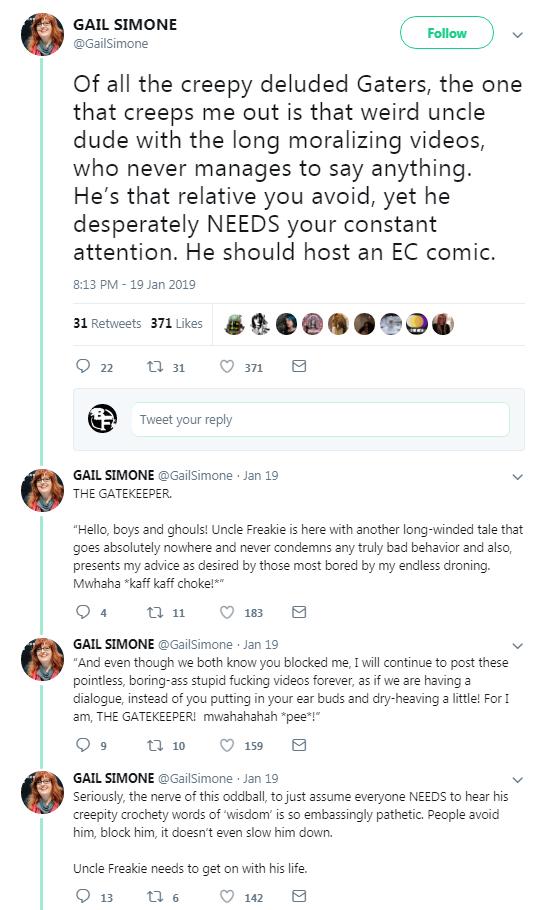 Edwin has about 3500 followers on Twitter, and a little over 2000 subscribers on Youtube. Gail, on the other hand, boasts well over 117,000 Twitter followers. That’s about a 50 to 1 ratio where Gail Simone can signal boost her invective and taunts. And as you can see, she garners hundreds of likes whenever she’s railing against people she doesn’t like. Where do comic book professionals draw the line when they’re publicly insulting with outrageous insults like what you see above?

Is Gail responsible for the actions of her followers? In a sane world, she certainly should not be, but these taunts are juvenile and unbecoming – especially for someone who works for both Marvel and DC, and has recently been selected to be the chief architect of an indie publisher’s superhero universe. The fact that Edwin has criticized her work makes her responses even worse, for it suggests that her spiteful responses to their criticism, expecially towards indie creators that don’t share their ideology, makes both Gail and DC, Marvel, and Lion Forge look bitter, threatened, jealous, & entitled.

In Gail’s defense, at least she showed moral support for Alterna Comics publisher Peter Simeti for the SWATting that he endured.

Okay, I just saw this. Peter, I am so glad you are okay.

I have nothing but contempt for the person who did this repulsive thing.

This is a bit surprising since Peter has defended Comicsgate in the past when others have tried to say it was nothing but “toxic fandom”.

Thanks for reading Alterna!

I’m sorry to hear you’ve had bad experiences with some people. I’ve also experienced harassment and even mocking how I felt suicidal when people tried to destroy my company — but it didn’t come from comicsgate, it came from those who oppose it.

Then again, Gail is a creator, and Peter is the publisher of Alterna Comics. There is likely an element of “professional courtesy” going on here, even though Simeti has been neutral or even supportive of some in the Comicsgate movement. She has offered no similar words of support for her critics who have been the victim of SWATting, nor do I expect her to.

It’s frankly insane that any comic pro regularly blasts comic fans on Twitter who don’t share their ideology. This insanity has to stop.

Edwin on the other had had this to say.

If you get angry on my behalf please don’t say or communicate anything that could harm or negatively impact you! Speak with clarity and compassion! pic.twitter.com/Of2gWjB8Rp