I found this old post at Spider-Man Crawl Space from last year, which brings up a plotline from the early 1990s, around the time of David Michelinie ‘s run in its latter half (at the time Maximum Carnage was going to press), where Mary Jane was smoking cigarettes:

Rather I wanted to use today to discuss a controversial topic regarding MJ’s character. That of her smoking addiction in the 1990’s chiefly under writer David Michelinie’s run on ASM.

Don’t worry this isn’t going to be an exhaustive dissection of every scene touching upon subplot. It’s more about the weird reaction the fanbase has had to it over the years.

Any time I’ve seen the topic discussed it’s talked about in negative terms. Unfortunately it’s been lost to time now but I distinctly recall former Spider-Man writer Dan Slott referencing the smoking subplot as part of why the marriage was bad. Crawlspace’s very own J.R. ‘Madgoblin’ Fettinger has even referred to the subplot as a ‘clumsy’ attempt to generate conflict within Peter and MJ’s relationship? 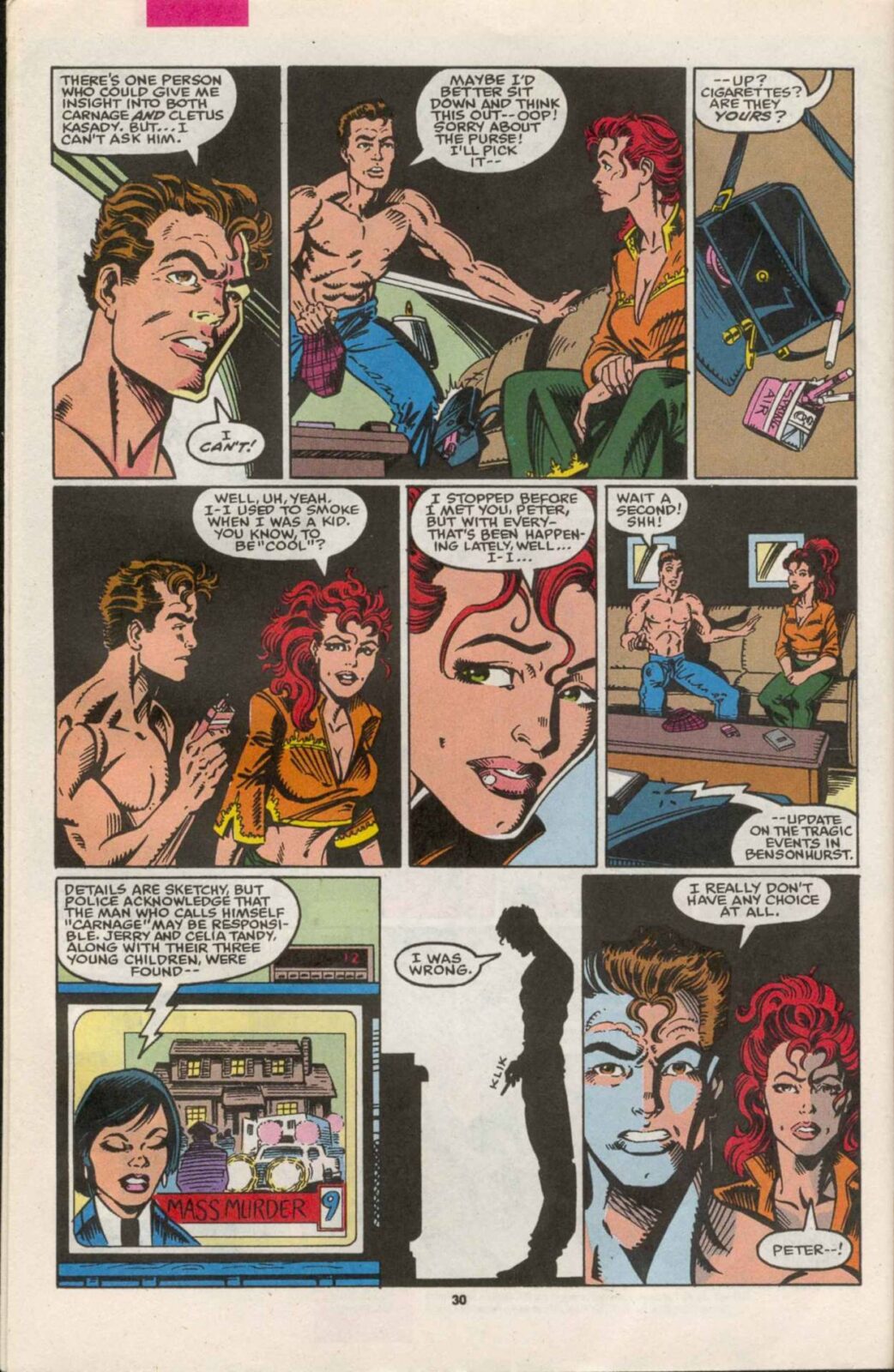 Let’s take a moment to concentrate on Slott’s response to this story. Obviously, another pathetic attempt he made to place blame upon a fictional character instead of the writer, no matter the quality of the storyline or not. He wouldn’t blame David Michelinie , or any other writer involved in developing the marriage for whether story merit was lacking. He, a man who, as far as I know, isn’t married himself, would only blame the marriage. Yet, indirectly, he was, in a way, belittling the earlier writers, most unfairly. And based on the following, it could all be just the tip of a very tragic iceberg:

By and large the feeling seems to be that the smoking subplot was ‘just bad’. But the rationale for why it is deemed bad seems to amount to…because it was about smoking. And when I say it is regarded as bad what I really mean is I’ve routinely encountered people react with bile and venom (no pun intended) over the subplot.

Essentially the subplot is regarded as bad because doing a subplot about smoking addiction is just an inherently bad storyline to do period, almost like it’s trying to be a preachy PSA over something that isn’t a big deal.

I however very much disagree with probably everyone on this topic. To be blunt the attitude most commentators seem to adopt towards Mary Jane’s smoking subplot seems to be incredibly lacking in perspective, exaggerating what is wrong with the storyline and its mere existence.

A lot of this I feel ties into fan biases against Michelinie’s run, the 1990s, the marriage or Mary Jane’s character in general which serve to judge all those things unfairly.* However I’m not going to discuss those today, but instead talk about why the animosity towards the subplot is just plain illogical.

For that, you can read the rest at the link. But now that I think of it, this bias against depicting MJ smoking cigarettes does sound in hindsight like the product of every pathetic excuse to attack the Spider-marriage, and MJ in particular, with no consideration for all the hard work Stan Lee did to create her in the first place. 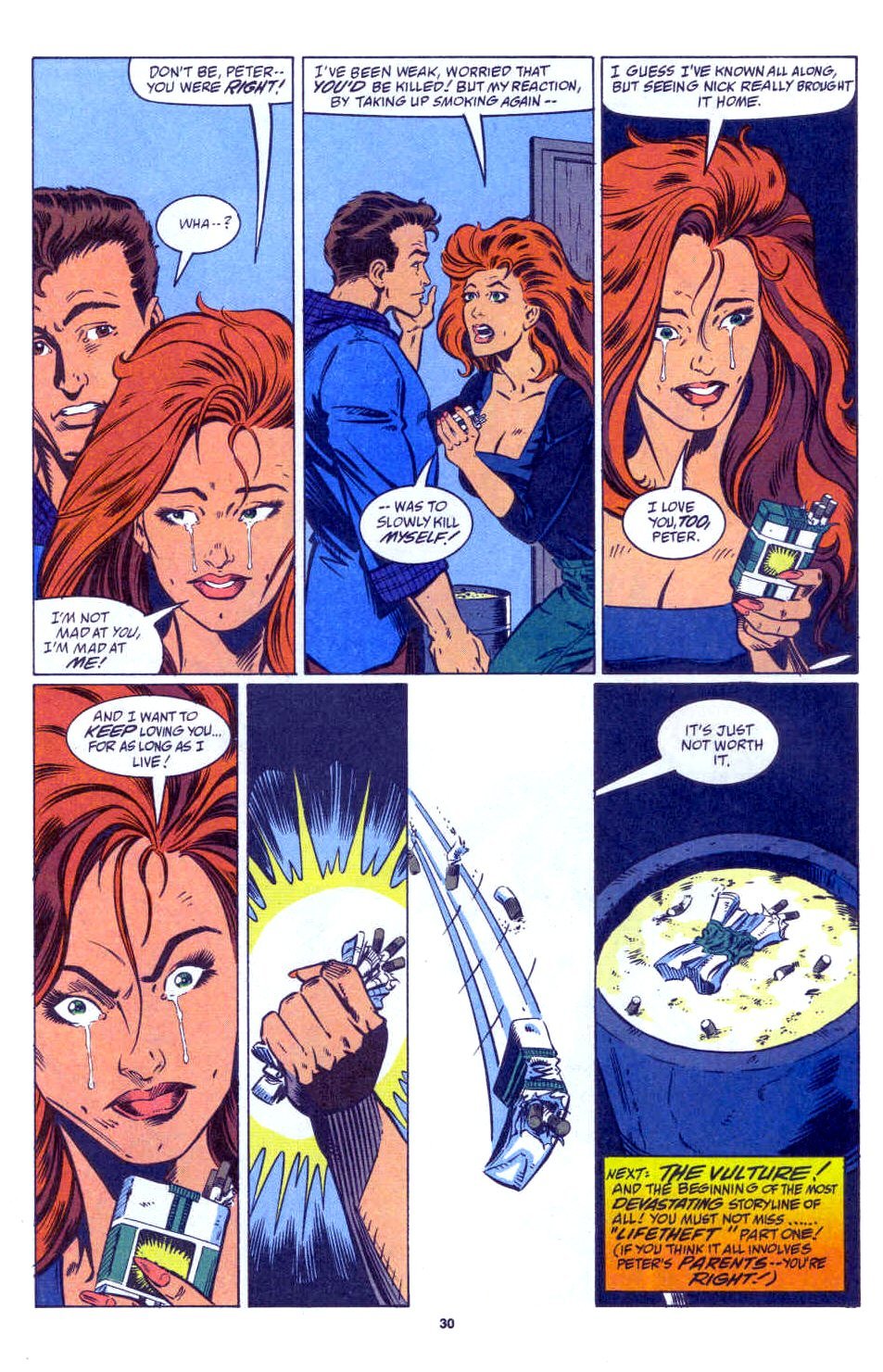 Let’s also consider that long before MJ was seen smoking tobacco, Nick Fury, The Thing, Wolverine and the She-Hulk were also smoking the same, and nobody complained about that. So why suddenly is MJ expected to serve as an altogether bright and shining example? Though it does bring to mind that DC once chickened out about the idea Golden Age Flash Jay Garrick should be depicted smoking, since after the 80s ended, they may have come up with a redone origin tale where a depiction that may have occurred in the 1940 GA premiere – and which I did see used in the Secret Origins anthology – was excised altogether, because their heroes had to be shiny examples when it came to petty issues like those, yet the violence that was increasing during the 90s was entirely acceptable.

My belief as far as tobacco smoking is concerned is that it can be done in entertainment if you at least acknowledge the health hazards. And Michelinie and company certainly weren’t saying it was right when they conceived their Spidey storyline. Just what kind of “fandom” is it where valid issues suddenly become “unfilmable”, and only used as sorry excuses to put down the hard work of writers who, while not perfect, were still far better than whom you see today? 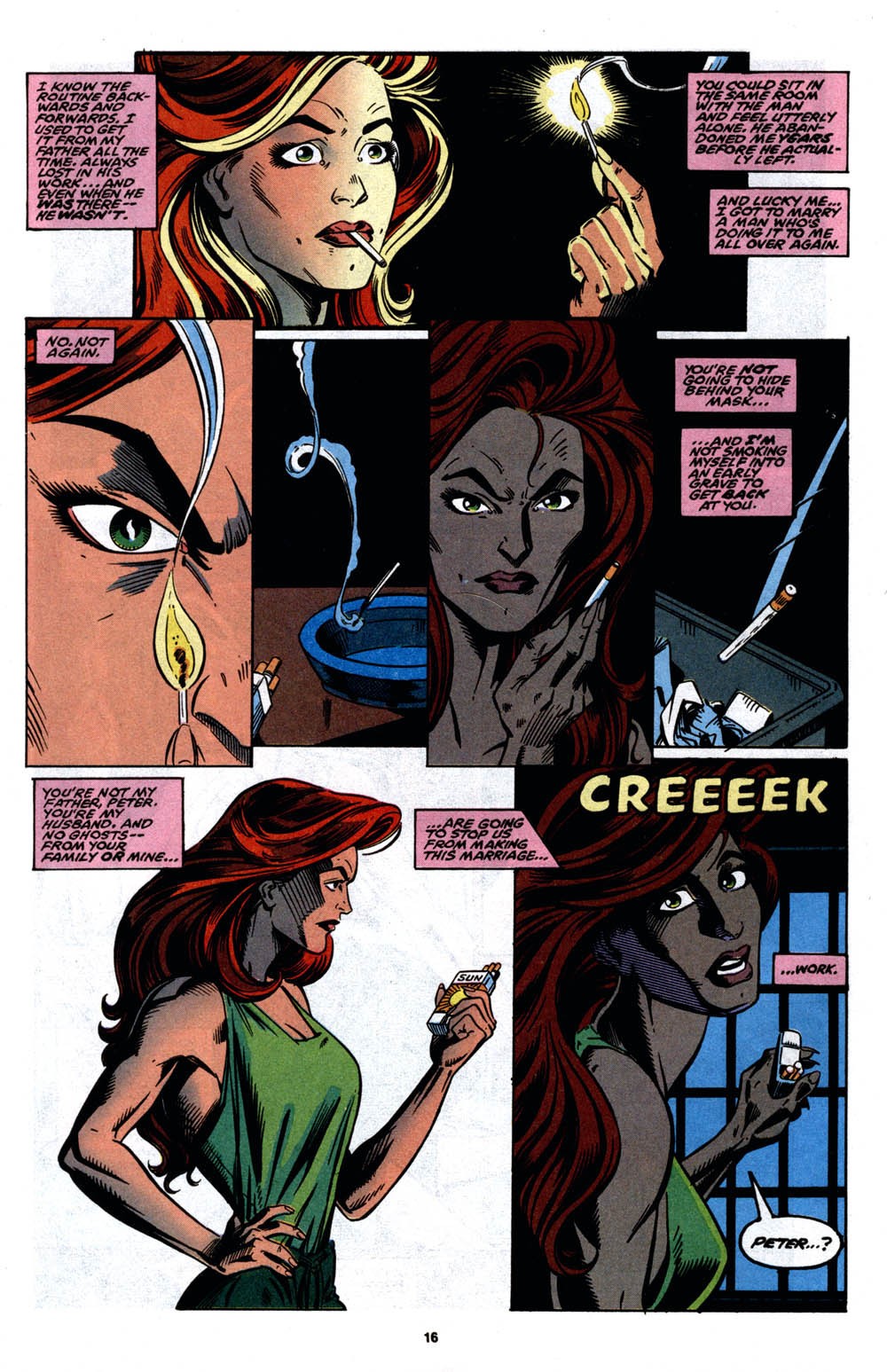 Once there was a time when various issues with relevancy and potential could be discussed in comics like these, and accomplished impressively if the writers played their cards right. Stan Lee himself practically helped bring it about when he wrote Harry Osborn making the terrible mistake of gobbling drugs in 1971’s groundbreaking ASM #97-99. Now, all of a sudden, we have a whole generation that doesn’t seem to want to address anything serious, just selfish SJW people who only care about advancing agendas like LGBT prop, 9/11 conspiracy theories, pro-Islamism, and even, I sadly fear, a position condoning cannabis addiction, which has already become commonplace in Colorado of recent.

This is precisely how debate’s been ruined in America and everywhere else, even in comicdom.