Contrary to the Comics, Adam Warlock is “Not a Good Guy” in GOTGv3 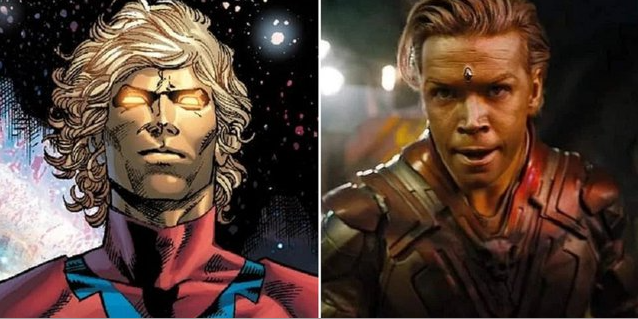 Ever since a certain cocoon appeared as an Easter Egg in Thor: The Dark World’s post-credits sequence, Marvel fans have been waiting for the emergence of Adam Warlock in the MCU. The ultra-powerful cosmic entity later got a more official tee-up for his upcoming big-screen debut, soon to arrive in James Gunn’s long-awaited three-quel Guardians Of The Galaxy Vol. 3. As established in Vol. 2, the gold-hued Sovereign leader Ayesha created him (in a different cocoon, the previous one no longer canon) to take down our favorite group of intergalactic team, the Guardians themselves, after they double-crossed her.

Get ready, then, for an incoming comic book favorite whose literal raison d’être is to take our heroes down. Or perhaps not, as Gunn teases. “It’s kind of more complicated than that,” he told Empire. “But he’s definitely not a good guy. What we’re seeing is the infant form of Warlock, newly out of the cocoon, and he does not understand life very well. He’s basically a baby.”

As babies go, he’s a physically imposing one – arriving in the form of a beefed-up Will Poulter, the 6-foot 3-inch Brit who, beyond popping up in Johnny Flynn indie flick The Score, was last seen on the big screen meeting a sticky end at the hands of the Hårga in Midsommar.

“People online were saying, ‘Oh, Tom Cruise should be Adam Warlock,’” says Gunn, who had other ideas. “I wanted somebody who was youthful, and I wanted the person who had the dramatic chops and the comedic chops, not only for this movie but for what Marvel will use Adam Warlock for in the future.”

Ah yes. Because with a character of this stature soon to be in play, you can imagine him being a handy person to have on the board in the upcoming Multiverse Saga. “He could become this really important character,” teases Gunn.

All the time raising him in that cocoon looks to have been worth it.

Guardians of the Galaxy Vol. 3 will be dancing its way into cinemas on Friday, May 5.