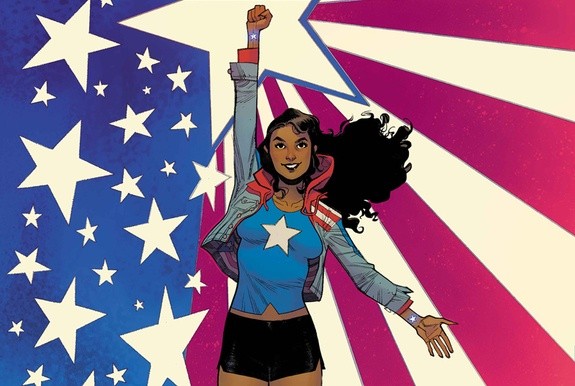 For the week of the release of Doctor Strange in the Multiverse of Madness, Polygon made sure to write up a fluff-coated take on one of the cast members, whose creation in the past decade could now be assumed to have been meant to provide filmmakers with a specially tailored creation to serve cinematic products by extension, more so than the comics themselves:

Though she was created by Joe Casey and Nick Dragotta for 2011’s Vengeance #1, America’s backstory, her iconic star-kicking power, and her lesbian identity wouldn’t be enumerated until 2013’s Young Avengers, created by Kieron Gillen and Jamie McKelvie.

In an issue drawn by Christian Ward, Ward and Gillen established that America hailed from a dimension called the Utopian Parallel, where her parents were a lesbian-couple-slash-co-rulers of a utopian paradise universe. Chafing that there were no problems to solve or heroic deeds to be performed, America used her multiverse powers to light out for a place in which her super strength and flight abilities were actually needed. Because great power comes with multiversal responsibility.

America has appeared in numerous comics over the years, some better than others. But a list of her greatest hits would probably be her team books: Young Avengers (2013), Ultimates (2015), and West Coast Avengers (2018). Most recently, America’s whole backstory was retconned to be much more mundane, but with Doctor Strange and the Multiverse of Madness taking the Utopian Parallel route, it’s a decently safe bet that her comics will trend back in that direction eventually as well. And anyway it sucked and was dumb.

Oh, also! America does have a superhero codename — Ms. America — but she hardly ever uses it.

No kidding. It’s enough to wonder if that’s because Marvel’s staff realize the now obvious social justice structure of the creation makes the character pale beside the original Ms. America character from the Golden Age. Interesting they seemingly admit in the struck line that something’s dumb about her stories so far, yet they continue to sugarcoat. 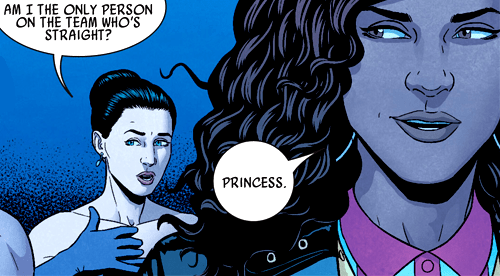 Even before this, Newsarama said one of Marvel’s staffers made the following statement:

Marvel executive Victoria Alonso has commented on Doctor Strange 2 character America Chavez’s LGBTQ identity, confirming that the movie will be sticking to that detail from the comics.

America will be played by Xochitl Gomez in the movie (officially titled Doctor Strange in the Multiverse Madness). She’s a teenager with the ability to travel between dimensions by punching open doorways, who’s struggling to come to terms with what makes her different.

“[America] is a young Latina who is part of the LGBTQ+ community, and has great power,” Alonso said in a new interview with Marvel.com. “Children want to see themselves represented. There is this level of identity that comes to be a very important moment in an adolescent’s life – to see themselves; to not be invisible.”

The Doctor Strange sequel has been banned in Saudi Arabia and Egypt and it was recently revealed that the movie includes 12 seconds of footage that Disney refused to take out which references America Chavez’s mothers.

It may be better not to censor it for the sake of the Religion of Peace™, which was the driving factor in barring it from screening in those 2 countries, but that still doesn’t make this a valid viewpoint to promote, and it sure doesn’t seem to have drawn any actual criticism from the Marvel employee. (Any chance she’s related to Axel Alonso, who proved to be one of Marvel’s worst editors next to Joe Quesada?) So no father in the lady’s life, just two mothers? Even more disturbing to think about is, what if the next Marvel project spotlights a child with two fathers? Something similar was already done last year on Sesame Street, in a tragic example of a childhood gem being destroyed for the sake of woke PC visions, going far beyond what some thought Ernie & Bert might represent years before. I hesitate to think what’ll happen when Alpha Flight’s adapted to live action and Northstar’s characterization is worked on. 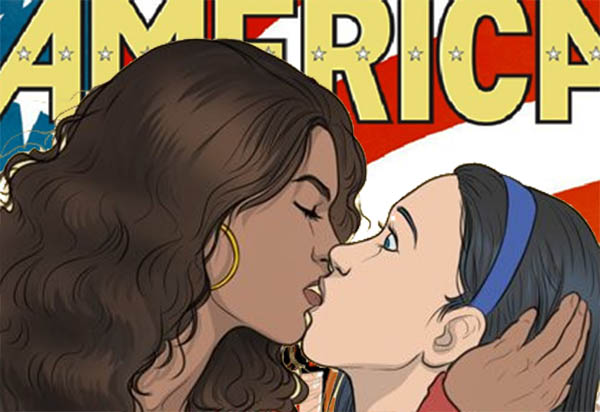 Kevin Feige also made things worse with his own woke approach, as reported by ComicBook:

During the press conference for Doctor Strange in the Multiverse of Madness this weekend, Marvel Studios president Kevin Feige spoke a bit about bringing America to the screen. The character in the comics is a lesbian, and Feige explained the importance of addressing her sexuality in the film.

“It’s important, as we always say, that these films present the world as it is, and the world outside your window, as they used to say in publishing,” Feige explained. “That aspect of America’s character is from the comics. We always want to adapt them as well and as truthfully as we can.”

Well in that case, is it wrong to present a viewpoint asking whether it’s a bad influence, especially for men? Not in the far-left mindsets of these ideologues, alas. This whole “world outside our window” idea has been taken much too far over the years, and Feige’s just making things worse. As Breitbart reminds everyone, Disney, as the owner of the Marvel studio, has been pushing these agendas increasingly, and this would be just one example. Also, Benedict Cumberbatch himself has made things worse by participating in a pro-abortion sketch on SNL. So as a result, I’m wondering why the film took in as much as $180 million over the weekend. Sure, the company may have lost $62 billion in stock revenue as a result of their activism, but that doesn’t mean this should be an exception to whatever Disney products are being boycotted. Especially not in view of how the film depicts Scarlet Witch as a villainess, as described in Little White Lies’ review:

Joining Cumberbatch is newcomer Xochitl Gomez, playing America Chavez (Ms Marvel) whose power kickstarts the narrative. Able to ‘hop’ between alternate realities, she is being pursued by the menacing Scarlett Witch (Elizabeth Olsen) whose grief following the events of Endgame and WandaVision has turned deadly. […]

If Wanda kills anybody innocent in the movie, which may be based on elements from Avengers: Disassembled and House of M, that’d definitely compound my decision not to watch this decidedly overrated film franchise. Why, what if this pursuit of Chavez in the movie was deliberate, so as to depict a white woman ragging on a POC/LGBT practitioner? Although Scarlet Witch in the comics was established as mainly of Romani descent along with her twin brother Quicksilver, she’s played here by an actress who’s far more white than mixed race. Based upon this, one can only wonder.

In any event, no matter what box office gross has been recorded so far, I myself am definitely not wasting my money here, and it’s head-shaking if there’s people who’re willing to overlook whatever writing’s on the wall. What makes all this live action, CGI-laden mishmash any better than the illustrated medium? I just don’t see it.