Comic Retailers Vs Comixology, Marvel Digital & Each Other 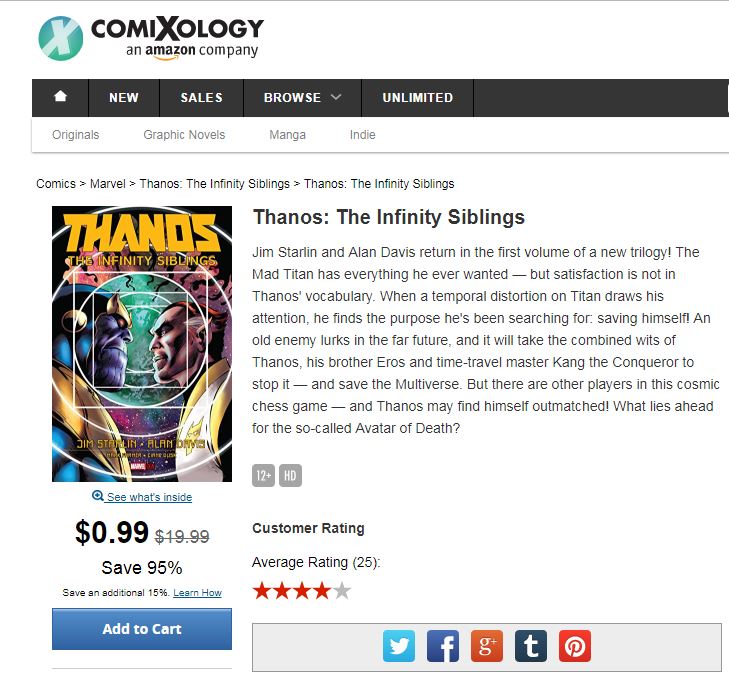 Brian Hibbs, is a respected comic store owner in  San Francisco. He owns and operates the Comix Experience at 305 Divisadero St, and Comix Experience Outpost at 2381 Ocean Ave. His first store opened 29 years ago this month. He also writes an ongoing column for Comics Beat called Tilting at Windmills where he discusses his experiences in the retail world and his thoughts on the comics industry. He’s penned an open letter below that specifically addresses ComiXology’s .99 cent sales that are running on new Marvel trades, hardcovers and collections on the same day that they’re released in physical form, usually starting before most comic shops even have a chance to open for business. 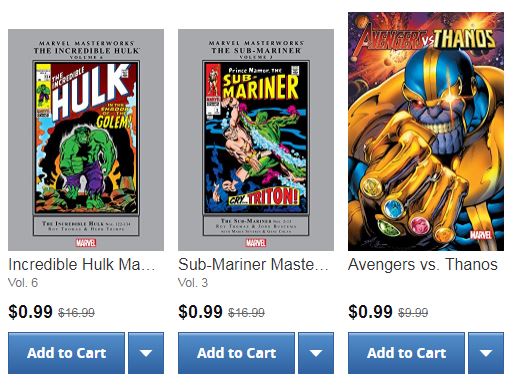 While the image above demonstrates some really deep discounts on older collections, the Infinity Siblings OGN is another matter (see image at top). The book was only released on April 4, and within hours it was already on sale in digital form on Comixology for only .99 cents (US). While there are many .99 cents sales at Comixology, the understanding has generally been that they will not do same day digital sales on comics that were just released, unless they are sold at retail prices. Even Marvel’s own Marvel Unlimited app generally waits around 6 months after an issue has been released before making books available on their reader. It isn’t just brick & mortar retailers feeling the pain either. Other digital book purveyors, like Google and Barnes & Nobel are selling the same new title at $9.99 & $11.99 respectfully (image below). 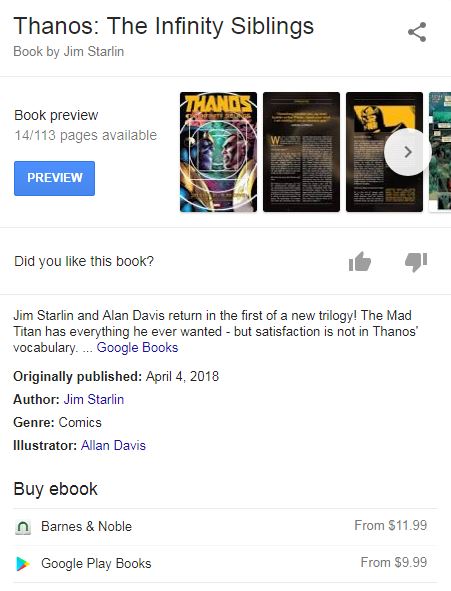 And so, Brian Hibbs penned this open letter of frustration to Marvel, published below in full.

I was extremely disappointed at Marvel comics’ performance at the Diamond summit this week. NOT because of C.B. — he very obviously has a heartfelt passion and concern for the line — but because of the lack of preparation for, and proper response to, retailer’s sincere and existential threat from the now FIFTH week of the wild undercutting on new-this-week book product coming from Amazon. It is utterly unacceptable that Marvel is allowing 96%+-off pricing on a brand-new book like INFINITY SIBLINGS.

C.B. says you’re “trying to get to the bottom of” this, that you are “in talks”. This, to me, is the kind of situation that gets resolved in absolutely no more than 72 hours (and that’s 48 more hours than my heart tells me it really takes) because of the literal harm it is doing to an entire class of customers.

Because after FIVE weeks, five weeks where this has been reported FAR and WIDE, five weeks where that reporting is DRIVING customers to digital at the expense of print, I have decided that as of this FOC, I can no longer order new Marvel graphic novels, and have zeroed out my orders on all book format product published by Marvel at both of my stores. I DO NOT WANT TO DO THIS, but the way that Marvel has slow-walked this tells me it’s the only thing I can do.

There’s still time to change this. Ceasing this program, and coming forward publicly with a full and completely transparent accounting of what happened, and I’ll happily reinstate those orders. Blissfully, even. But my economic power of purchasing, even if it’s only a fraction of Amazon’s, is the only power I have. And there are plenty of other publishers wanting to sell me books that are bending over backwards for me so that I will have no problem filling my racks.

I don’t know everything about what Amazon does and why, but in years of watching them, what C.B. described does not match any known behavior that I have observed, nor what I have been able to discuss with other publishers about the behaviors THEY have observed. C.B.’s picture simply doesn’t make any sense — Amazon does not take that kind of a loss on that kind of scale unless it is being made up in some other consideration from a manufacturer.

I hope this is dealt with both promptly and publicly; I’d like to keep ordering new Marvel book stock.

Thank you for listening,

Hibbs has gone up against Marvel before, most notable in his class action suit against Marvel on behalf of comic book retailers which took place in the spring of 2002. That was over Marvel’s refusal to accept returns on books that shipped late and books with last minute creator changes. After a court-ordered arbitration, Marvel settled the class action lawsuit and under the settlement agreement, Marvel denied any wrongdoing, but did provide a small windfall (in the form of credit) to thousands of comics shops across the globe.

Now, we’ve already reported how digital comic sales may actually be hurting the comics industry. Are Comixology and Marvel’s massive digital discounts a symptom of a larger trend that’s going to get even more intense when DC launches its their digital streaming platform? The goal will likely be to increase monthly subscribers, as is the goal with such platforms and we expect it to include access to a Marvel Unlimited-style service with thousands of back issues from 1938 onward for $10 per a month or less.

Is Amazon playing a long-game and looking at digital comic sales as a loss leader simply to bring in more customers? It’s not unheard of.

Is Mr. Hibbs recommending price fixing? Amazon is an independent retailer, and once they buy product from a manufacturer or distributor, they can sell it for any price they want, higher or lower than the price they paid, and can generally ignore the (MSRP). Amazon is not obligated to match prices with local comic shops. Amazon can obviously afford to offer loss-leading prices, whereas price fixing digital comics – would be a disaster.

Since the Mr. Hibbs’ open letter was published and disseminated around the world wide web, another retailer, Michael Savage of Uncanny Heroes Comic Shop in Florida, penned his own open letter, this time to Brian Hibbs writing…

Your letter to Marvel has me somewhat confused. It seems, and correct me if I’m wrong, that you’re placing the .99cent Thanos debacle from last week on them. When This was addressed at the Retailer Summit, C.B. was very open about Marvel being just as blindsided by the sale.

Much like Marvel not having control over many retailers having an “Always 25% off” sales on Trades and Hardcovers (we do this in our shop to stay competitive with Amazon), they have zero control over what ComiXology or Amazon chooses to price books at. This applies to print or digital.

Do you want corporate price controls on our products!? Or just controls on our competitors – but not us? It seems like you’re asking for Marvel to step in and control price which would have to be line wide and equally enforced.

The real issue here is we have new competition with massive presence and a digital footprint the size of a continent, and your trying to think, negotiate, and compete against them with a decade plus old style of thinking. We have to be better and smarter than that.

These publishers – all of them – are in the same business as us, they are our partners. We have to sit and listen with eager ears when they present at summits, yes we have to engage in healthy debate, (healthy the key word), and we also have to show some respect for their decisions. If you don’t like where they’re going then fine – just stop ordering from them.

Your letter could have gone straight to C.B. and David. You could have chosen to wait a week, get curious and ask questions beyond your surface level frustration, and partnered with them towards a solution. Instead you wrote your “open letter” to stir the pot, knowing the answer won’t change if you’re asking the same question from the same reactive frustration.

And Sir, before this seems like I’m in opposition, please know that I know you absolutely have done wonders for retailers and I’ve said this before – I respect you deeply. In this instance this feels like it’s more about YOU and less about truly joining in a solution based discussion.

This kind of stuff alienates publishers and retailers and as a group of business professionals if we are going to grow, and thrive, we all do well to follow Steve Geppi’s advice and stay positive, see what’s possible, and work together to keep our “club houses” full of comics fans.

I’m only 18 years new to this business, and maybe have learned a few things in other businesses, and look, I’m open to being totally wrong on this.

I just see a better way, and it starts not with blame and attempted public hanging, but instead with patience, curiosity, dialogue and partnership.

Our buddy Englentine, who runs the Youtube channel ‘I Love Comics,’ weighed in with his nuanced hot-take.