Marvel Studios president Kevin Feige has made it clear that progressive storytelling and inclusivity will be an even bigger part of the Marvel Cinematic Universe in the wake of the Infinity Saga. We’ve seen some of this already, of course, from Black Panther’s “Wakanda Forever” being embraced globally, and how audiences have greeted the message of feminism in Captain Marvel.

Of course, the Brie Larson-helmed film has opened the door for the studio to make an even bigger statement by presenting the new face of the MCU as a straight-up LGBT character.

Yep, ’cause that’s all we need; more and more retcons to established characters, turning them inside out, their specific origins be damned. The movie, much like the comics of recent, throws out a number of the original characterizations in Ms. Marvel’s stories with bath water, like her affair with a USAF officer named Michael Rossi, and even Wonder Man. As for the feminist angle, it may have worked in some overseas countries, but not in the US, as the lower-than-50 percent ladies’ attendance to theaters should confirm. But of course, you couldn’t expect these liberals to be honest about it, could you?

Larson has already playfully stoked these flames on social media, enthusiastically sharing fan art of her and Tessa Thompson’s Valkyrie in a romantic lock-up. Valkyrie is bisexual in the MCU, though we haven’t seen it on-screen, and there’s something deeper to mine here than mere ‘shipping. Why can’t the strongest Avenger out there, the one who’s leading the new era of Marvel movies, be gay?

Fans have already found hidden context in Captain Marvel that has led them to theories about Carol’s sexuality. She has no male love interest in the movie, and always appeared hellbent on bringing the patriarchy down, whether on Earth or Hala. Some even feel there might have been more than just adoration between her and Annette Bening’s Mar-Vell, or with her best friend Maria Rambeau (Lashana Lynch).

Well at least now we know where Larson is coming from, at the expense of the original materials, much like this awful news site is. “Theories” is also enough to make me howl with laughter at this point, because the characters in the comics/movies aren’t real people, and you can’t just automatically assume they’re one sexual orientation or another.

By the closing credits of Avengers: Endgame, Captain Marvel may very well have become the most popular hero in the MCU as well as the most powerful, a designation she’s already well on her way toward claiming. Outside of her fictional reality, where she’ll play a key role in taking down Thanos, her film is nearing the $1 billion box office mark, and that’s despite a dogged campaign of comic book fans to ensure the film’s failure. The general audience has embraced the hero’s progressive style and what she stands for, inspiring girls and women globally. By making her queer, the studio would jump to the forefront of gay rights everywhere. By presenting Carol Danvers as a feminist, a strong woman, and a hero with an unbreakable will who just so happens to be an LGBT representative would be a remarkable way to help shape the MCU’s future.

Will the hilarity and madness never end? Guess not. The stateside audience sure hasn’t “embraced” this whole farce. It does make me think though, of how the filmmakers went out of their way to make Maria Rambeau look so unattractive, which IMO does a disfavor to black women. As though it weren’t bad enough you had stereotypical renditions of blacks in Golden Age comics, now, in a way, they’re boomeranging back to it. And no concern is shown over how the filmmakers went out of their way to make this into “Captain Mary Sue”, as the heroine has no significant flaws and beats the baddies almost entirely without difficulty. All that matters to them is the political agenda slipped into the screenplay, as it was with Iceman back in the comics. 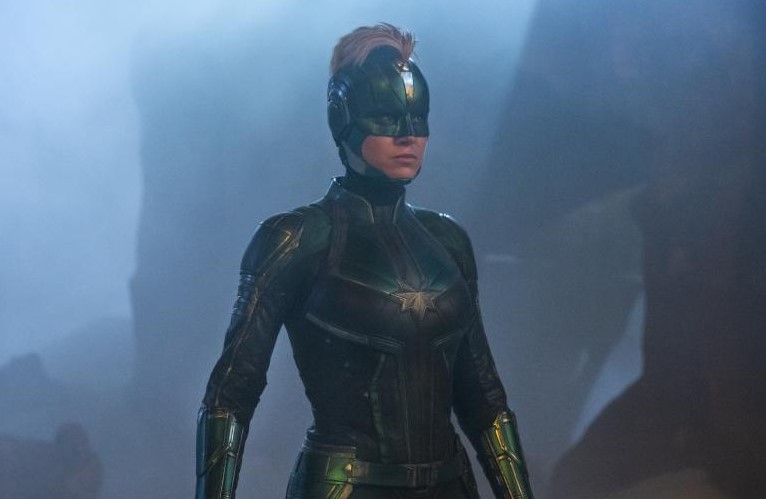 Captain Marvel may be the Marvel Cinematic Universe’s biggest female star, but simply commanding her own movie and having no faults or weaknesses to speak of isn’t enough for the social justice warriors; Captain Marvel must also openly embrace the LGBT lifestyle. […]

In the comic books, of course, Captain Marvel isn’t LGBT — and worse, her taste in love interests is varied (at best) and weird (at worst). She’s hooked up with everyone from Wonder Man to Wolverine for brief arcs, and at one time dated her mentor, Mar-Vell (played by Annette Bening in the movie, in a cynical casting decision that seemed to underscore Marvel’s intent to make the Captain Marvel franchise as “female-led” as possible).

In fact, Marvel Studios president Kevin Feige told reporters last week that Captain Marvel is deliberately love-interest free in order to stress the importance of her friendships and mentorships. […]

“Well that was something as we were developing the script and queuing off of the comics as always, it never even occurred to have a love interest,” Feige said. “That’s not what the movie was about. It was about Carol finding herself and growing and making mistakes and being bolstered up by her female mentors and female friends.”

An LGBT plotline might have gotten in the way of Carol Danvers’ more realistic human relationships, or tasked Captain Marvel with defeating the Patriarchy and not, say, the enemies of humanity. It’s an unnatural development for the character to take her in a different direction, no matter how much a temporary “progressive” win might mean to Marvel Studios (probably not a lot).

What they scripted was more or less unrealistic in the finished product, but they won’t admit it. And Feige’s wrong about reception, as 3rd week box office receipts indicate, with the film dropping from 1st place much the same way Batman vs. Superman and Justice League did, taking in huge chunks but otherwise underperforming. If Feige’s serious about going ahead and applying the same direction used in Captain Marvel, it’ll only be a sign that what once went up must come down, and is bound to be felt at the box office. On which note, it’ll be interesting to see what becomes of Avengers: Endgame. I’m sure that’ll make a lot of money in its first week or two, but if the script turns out as tasteless as Captain Marvel’s, then it’s bound to join the club for underperformers. And it’ll prove Feige was a bad omen for the franchise in the long run.