The Penn. Courier Express wrote about a comics store manager from St. Marys, PA who’s doing for 3 Rivers Comicon what bigger conventions like SDCC used to do, and all but stopped doing in the past decade or so:

[Jon] Engel works for Todd McDevitt, and the two of them talked about starting a comicon when Wizard World Pittsburgh ended.

“Mostly, we had to figure out what we really wanted the show to be, which we decided to focus more on comics,” Engel said.

Many shows now relegate the comics to the fringes while cashing in on the movie/television personalities associated with comic properties. McDevitt and Engel wanted to make sure that their con did not follow that track.

He’s doing the right thing there. And if the major entertainment conventions like SDCC really don’t care about the comicbooks anymore, then maybe they should just stop calling themselves comic-cons and start calling/titling themselves what they’re really emphasizing today – movie-cons, video game-cons, music-cons. In other words, be honest about the focus, for heaven’s sake. 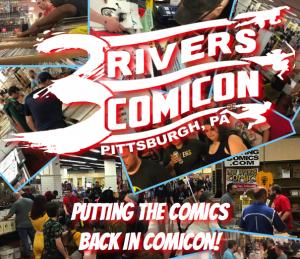 Engel’s setting a good example as somebody who admires the medium of comicdom, and I wish him and his colleagues luck in getting this convention on the road to success.