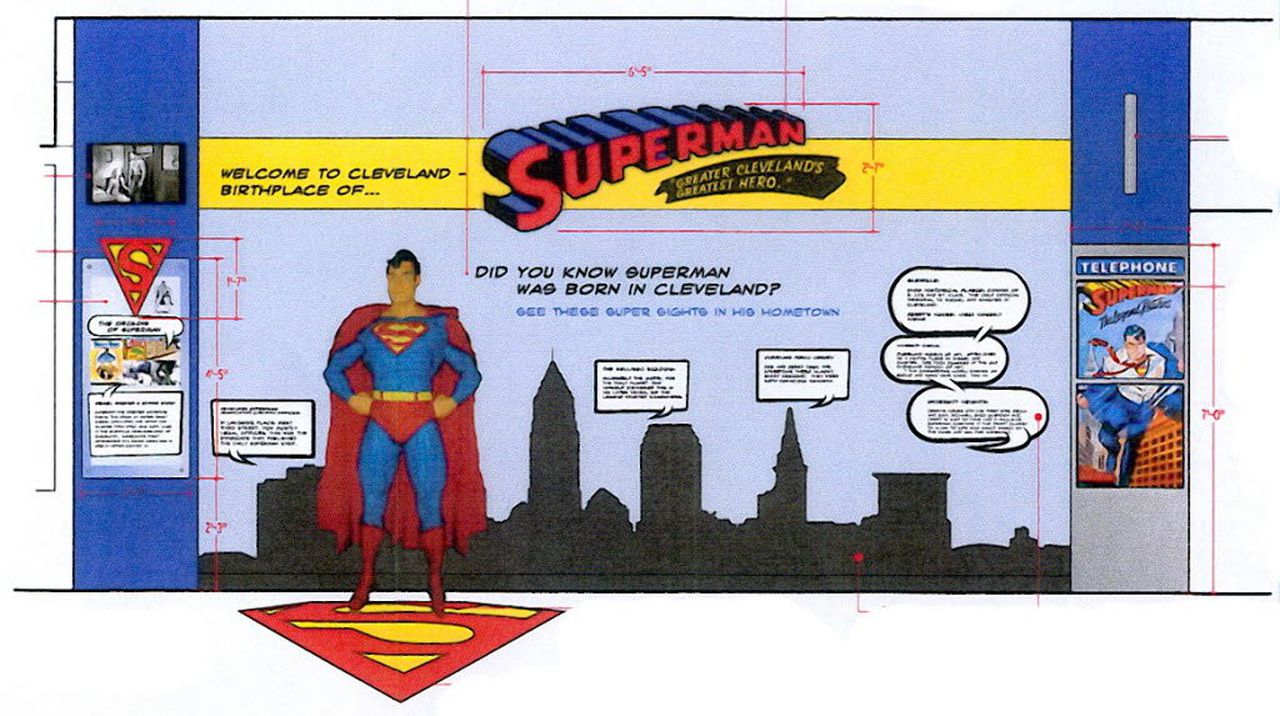 A writer at the Cleveland magazine, who’s also worked for The Plain Dealer, tells how the Ohio city where Man of Steel creators Jerry Siegel and Joe Shuster lived doesn’t really embrace the fact. The article, unfortunately, also notes a very slimy character who had no business contributing to the preservation of history. First:

Cleveland is to comic books as Motown is to music. But talk to some Clevelanders, and you’d be surprised how few know it.

Back in the 1990s, when I worked for The Plain Dealer, I interviewed a member of the mayor’s administration. I asked why the city does not do more to embrace its Super heritage. Where was the billboard of Superman welcoming people to his birthplace? Where was the “Birthplace of Superman” slogan on city advertisements and proclamations?

“You do know that Superman was created in Cleveland, right?” I said.

He was shocked. He had no idea.

The whole genre of superhero comics was born here in 1938 when Superman, the creation of Glenville teenagers Jerry Siegel and Joe Shuster, graced the cover of the first issue of Action Comics. That was the beginning of the comic book revolution. Since then, the number of comic pros that have Cleveland links would fill this page.

Not all of them are admirable people, however.

Brian Michael Bendis is a Cleveland native, and what’s he done to make anybody proud of him? When he came into mainstream in the early 2000s and took over the Avengers, he made Scarlet Witch into a madwoman, all for the sake of turning the Earth’s Mightiest Heroes into a Disassembled bunch, so he could then change the franchise into his biased idea of what it should be: a series with rather obvious casting choices like Wolverine and Spider-Man (and he even wallowed in sensationalized violence against Tigra). And the House of M crossover he engineered was insulting too, as was his work on X-Men later. Bendis is also seen as precipitating the use of padded storytelling for the sake of trades, which became a major problem as the decade went by, and is doubtless still prevalent today. His current work on Superman’s no improvement. The article then says:

And some of these writers were responsible for the recent social justice push (Rucka, for example), to say nothing of alienating fans of the medium. They’re hardly people I’d recommend admiring.

Other cities, like tiny Metropolis, Illinois, which shares the same name as Superman’s fictional home, exploit their tenuous relationship to Superman with annual festivals and museums. Even Toronto, where Superman artist Joe Shuster was born, touts its connection to Superman.

But Cleveland, the only city in the world that can claim to be Superman’s birthplace, has ignored Kal-El and the legacy of comics greatness he represents, even as there has been a groundswell of grassroots recognition.

Of course that’s a shame, but what if some of the writers cited above are partly responsible by serving as such poor examples? And seeing how far entertainment value’s fallen since the 90s, with monstrosities like the Death & Return of Superman coughed out – stories which, viewed under a magnifying glass, are extremely ugly in hindsight – is it any wonder efforts to get a city to recognize its cultural heritage aren’t so successful? 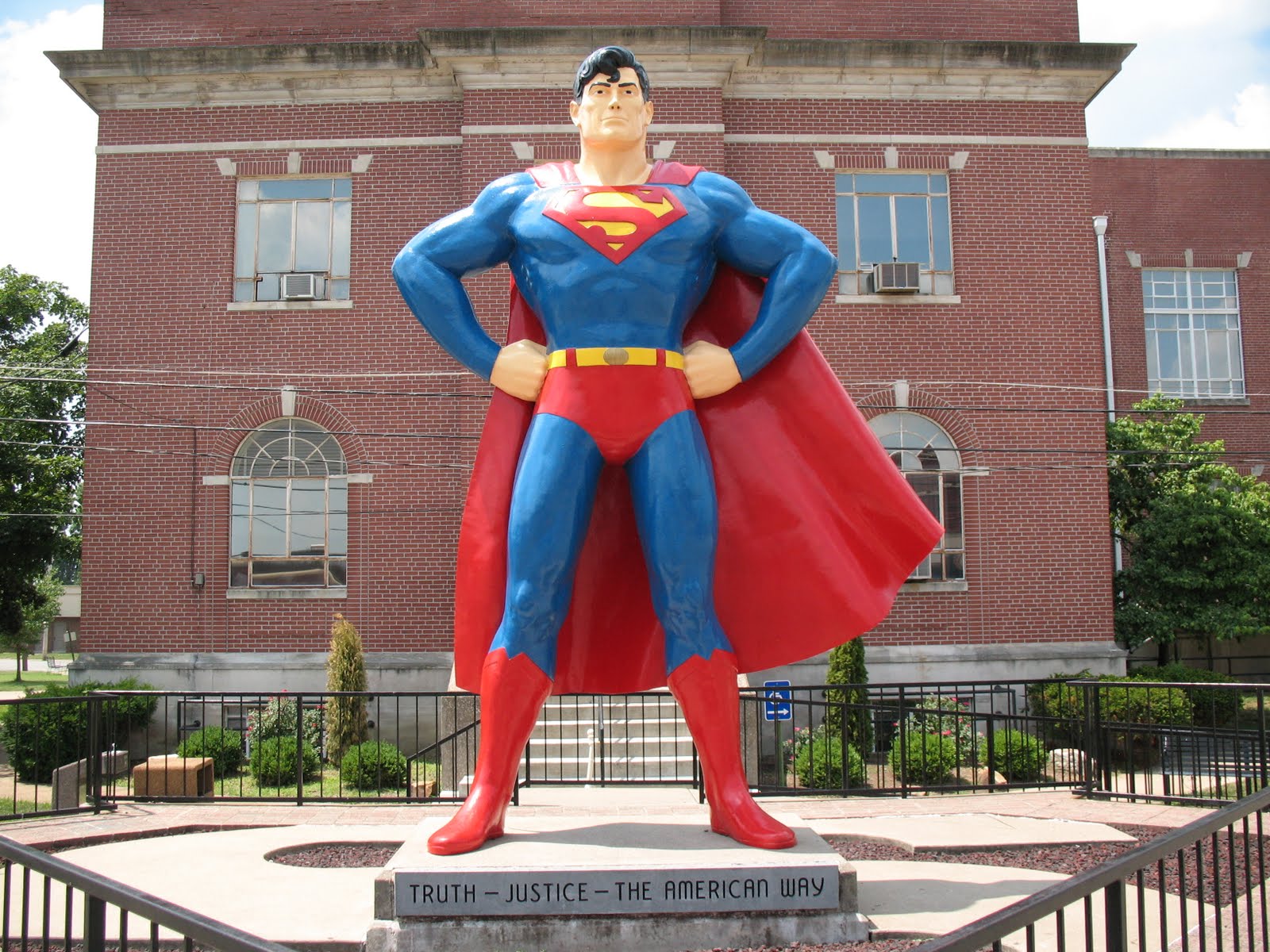 To make matters worse, one of the contributors to the Siegel & Shuster Society’s projects is just as much an embarrassment as Bendis, if not more so:

The Society created the Superman Welcoming Center at Cleveland Hopkins International Airport and assisted the renovation of the home of Siegel at 10622 Kimberly Ave. in Glenville, complete with an impressive outdoor display.

With the indispensable aid of novelist and Superman fan Brad Meltzer, we raised more than $100,000 from fans around the world for the renovation.

Uh oh. The writer of Identity Crisis, the notorious 2004 miniseries rife with gender bigotry, was one of their assistants? All that does is give an icky feeling, knowing one of the leading contributors to renovating the Siegel residence was a man who embarrassed the Superman legacy as much as any other character, in a tale that, in the era of Harvey Weinstein, would not be possible to publish without facing some serious scowls. Far as I can tell, Meltzer was just virtue-signaling when he took part in the Siegel & Shuster Society’s work.

With that kind of “aid” from somebody so scummy and unrepentant for producing a loathsome story offensive to victims of sexual assault, is it any wonder Cleveland may not commemorate the Superman creators as much as we’d wish? What if anybody who’s a realist in Cleveland did know what Meltzer’s resume includes? If I were a member of the Siegel & Shuster Society, I’d be embarrassed, because it can have a negative effect on their reputation. The way the miniseries was structured – minimizing the issue of sexual assault – practically goes against what Superman’s supposed to stand for.

But he too is an early example of a bad leftist who hasn’t helped comicdom any more than the aforementioned Bendis, who’s brought up again:

The best-known working comics creator with Cleveland roots today is Bendis. He worked for Marvel Comics for 17 years before moving to DC Comics in 2018.

He urges young artists to perfect their craft and not to be lured by the bright lights of the big cities. That’s what he did, growing up in Cleveland before moving to Portland.

“I’ve long preached to young comics creators about the advantages of living and working here in the Midwest,” Bendis says. “Why go broke living in New York City or Portland? Move to a funky Rust Belt city where living is cheap and there’s a lively comics scene. You don’t need to live in an expensive city in order to make it in comics. I’m a great example of that.”

Oh, preaching, is he? In his case, he’s been preaching the concept of deconstructionism, and trolling fans who’re rightly outraged at the sleazy way he’s handled the Marvel books he wrote, and now, he’s applying that same approach to the Superman books, though having been around for nearly 2 decades in the business, whatever sales success he had wore off. And what’s the point of not being lured by the big skyscraper burgs? That doesn’t guarantee hacks like him won’t set about ruining all that made the superhero comics work, or that the editors won’t enable it. The end of the article says:

We should embrace and share our history, and take the advice given by the Man of Steel himself: “Do good unto others and every man can be a Superman.”

Well if they really wanted to do good, they wouldn’t gloss over the grave mistakes people like Bendis, Meltzer and Rucka made, among others. Nor would they go the J. Jonah Jameson/Bethany Snow route of propaganda instead of the Clark Kent route that’s meant to be dedicated to Truth, Justice & the American Way, something today’s leftists largely shun.

If Cleveland’s sadly ignorant of its history with comics and Superman, it’s surely the result of ignorant liberal education that marginalizes history, something I doubt the supposedly worried liberals have ever considered. Doing business with writers whose resumes include morally bankrupt, questionable examples of storytelling does nothing to improve the situation. The closure of comics stores in recent years, which doubtless affects Cleveland to boot, also stems from the same lack of interest.