The Chicago Bears website has word of a member of the football team who’s his heritage from Africa with a new graphic novel set during the Roman empire period:

Seeking to learn more about his heritage, Bears linebacker Christian Jones took a DNA test that yielded some intriguing results.

Jones discovered that his mother’s side of the family hailed from Nigeria, descending from the Yoruba ethnic group. The Yoruba people are linked with the Nubians, which is modern-day Sudan.

“I was always curious growing up where my family roots were,” Jones said. “I took an ancestry test and I was able to get more details on exactly where my mom’s side of the family was from. After I found that out, I started looking up stories from that area, finding out the history. I kind of went down a rabbit hole and started seeing all these cool African stories that I had never heard about.” 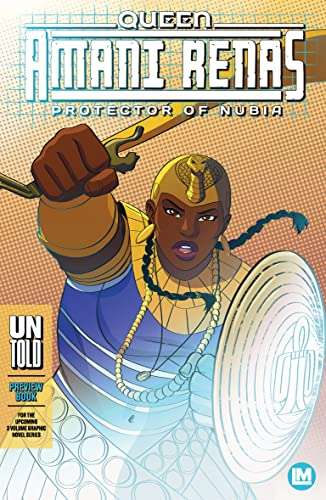 Eager to share some of those untold tales, Jones and his wife Liz this month launched a multimedia company, Lymari Media, with plans to chronicle the stories of historical African characters, societies and culture through comic books, podcasts, animations, short films and documentaries.

The company’s first project is a three-part series of comic books entitled, “Queen Amanirenas, Protector of Nubia.” Queen Amanirenas was a queen of the Kingdom of Kush from 40 BC to 10 BC. Despite being blind in one eye, she fearlessly led Kushite armies against the Romans in a war that lasted from 27 BC to 22 BC.

“I feel that telling the story of Queen Amanirenas will be an uplifting story to hear,” Jones said. “Especially back in that time, you don’t hear a lot about woman queens who actually fight in battle and led nations. So that really stood out to me.

It’s absolutely a part of history worth telling and learning. But no doubt, the mainstream publishers, in all their political correctness, would never draw inspiration from a story like this, nor the continent it occurred upon. That’s why it’s been up to independents like this guy’s company to develop stories like Queen Amanirenas’ for comicdom. Jones is doing everybody an excellent service with a history-inspired story that’s definitely something to learn from.

Check out the first book here.