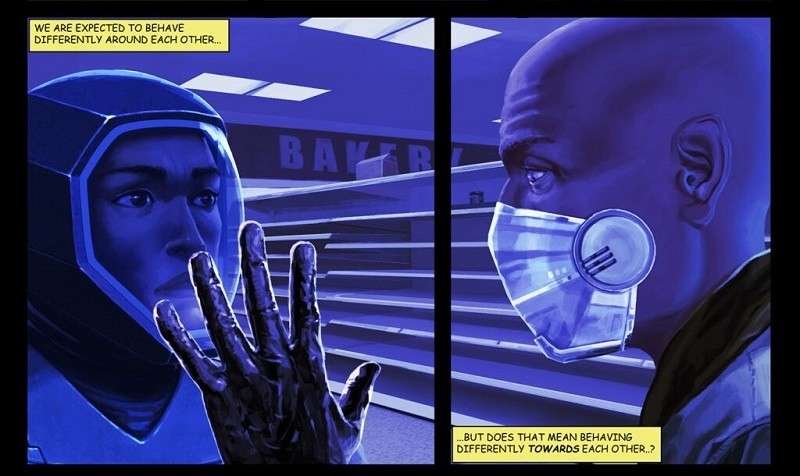 Mancunian Matters announced there’s a comic project prepared in Manchester between UK and Chinese sources that reportedly connects young people during the Coronavirus lockdown to tell their experiences:

‘Connectedness through Comics’, a joint creation between charity 42nd Street, Manchester City of Literature, and Manchester Metropolitan University, invites young people to connect with the comic’s storyline and prompts to contextualise their own experiences of lockdown.

The comic will also be shared with Manchester’s twin city and China’s own City of Literature, Nanjing, to connect with young people across the globe.

[…] Mr Williams said: “Whether you’re in Manchester, in Nottingham, or Nanjing, there is a similar narrative here of isolation, and having to adjust to a new world.

“We’re combating that loneliness element by saying you may be lonely because of isolation, but you’re not the only person that’s lonely.”

Artist Ian Bobb tried to create a story that would resonate with each reader’s individual experience.

[…] Mr Williams said: “Comics are exceptional because they enable us to imagine the impossible, or the seemingly impossible.

“For young people, or anybody from a different background, being able to imagine a possibility and a different life outcome is absolutely essential.”

But what are the chances this comic will take a critical view of any mistakes the UK government’s made in dealing with the pandemic, such as NHS hospitals turning away patients, extremely disastrous management that’s so far led to over 100,000 deaths from the illness, and the latest being an atrocious scare tactic campaign? Seeing how this project’s being done in association with a Chinese city’s literature society, will there be any criticism of the country with the Great Wall for failing to act responsibly in order to prevent the virus from spreading as it tragically did? If not, what’s the point of this comic? They may make it possible to imagine the seemingly impossible, but if they can’t enable us to take critical views of those responsible for causing catastrophes like these, then what good does it do to emphasize resonation with the individual’s experience, let alone stress what’s absolutely essential?

This comic in the UK, I figure, will sadly fall way short of its potential, since political correctness is bound to take precedence in its development.
Originally published here.