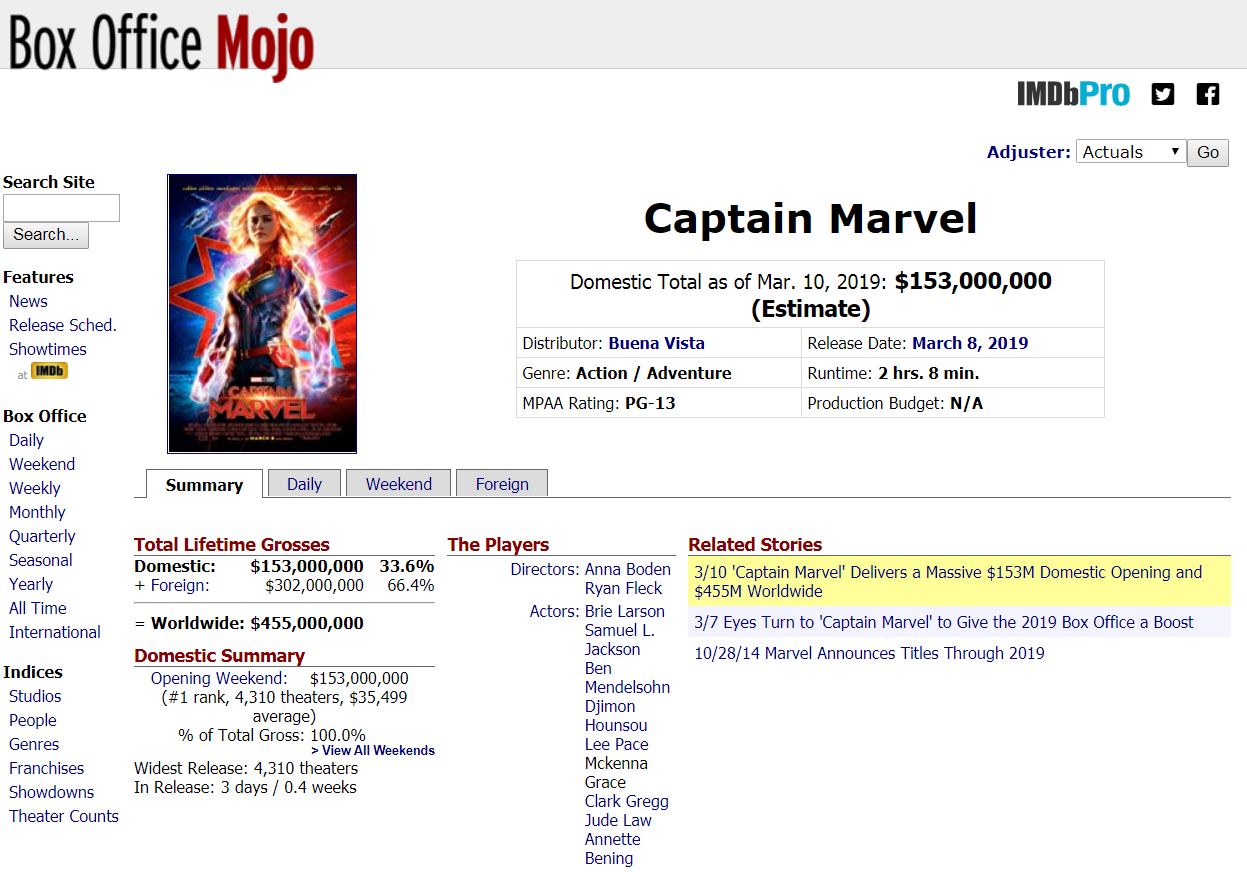 Last Thursday night, Marvel Studios’ “Captain Marvel” premiered to the public. Today, the film’s opening reportedly raked in an estimated $153 million and is being celebrated as a triumph. The film and its star, Brie Larson were the subject of much controversy over the past few weeks, stemming from Larson’s comments regarding “white male” movie reviewers commenting on movies that “weren’t made for them”. Many fans saw this as sexist and bigoted. Then the fandom was further divided after Larson’s comments and a lackluster first trailer. Larson also claimed she wanted to make the movie a “feminist film” which turned even more people off to watching it.

On the popular film and tv review site “Rotten Tomatoes” many MCU fans voiced their displeasure by voting on the movie’s Audience Interest Rating. The influx of votes caused the interest rating to plummet to as low as 27%. Rotten Tomatoes eventually altered their site removing the ability to rate fan interest before a movie is released. A number of articles were also by various media outlets condemning the “review bombing” of the movie by “trolls”. This was highly disingenuous as these were not actual reviews merely indications of interest in the film. Rotten Tomatoes eventually removed the Audience Interest Rating feature.

Before the film was released the Critic Score for reviewers who had seen the movie early sat at 90% to 80%. Once the movie was released and fans were able to leave their reviews it gained an Audience Rating of 34%.  The shill media again blamed the fans for not liking the film even claiming it was simply trolls who disliked a female led superhero film. Everyone from “Vox” and “The Mary Sue” to the “Washington Post” and “Forbes” blamed the negative rating on “sexist troll”. This seems to be an agreed upon narrative the shill media is trying to promulgate despite evidence that many women also were dissatisfied with the film.

In a recent interview on SyFy Wire, a certified critic on “Rotten Tomatoes” admitted they will often give movies higher scores even if they disliked them to maintain standing and access. Another reviewer claimed he didn’t like the film but he would not say so in his review to avoid giving “incels” the victory. “Rotten Tomatoes” also seems to have intervened once more on the films behalf. The site deleted over 50,000 fan reviews raising the audience score from 32% to 36%. Even now the site seems to be curating the audience reviews with many on “Twitter” reporting that more reviews have been deleted. Currently the Audience Rating stands at 55%. It is blatantly obvious that many in the media are trying to make “Captain Marvel” appear a better film than it is and smear any detractors as sexist. This is the same strategy that was used to defend the abysmal 2016 “Ghostbusters” reboot.

However not all the media are so ideologically inclined as some are not afraid to call the movie out on it’s flaws. After less than two days of being available to the public the film’s Critics Rating has actually dropped to 79%. This makes “Captain Marvel” the 6th lowest rated Marvel title in a franchise of 21 films, while also boasting the 7th best opening. It seems the shill media will have to work much harder to save the reputation of this film. There were even signs that the actual “review-bombing” were fake POSITIVE reviews. You can Google this same review below and find dozens and dozens of matching reviews. 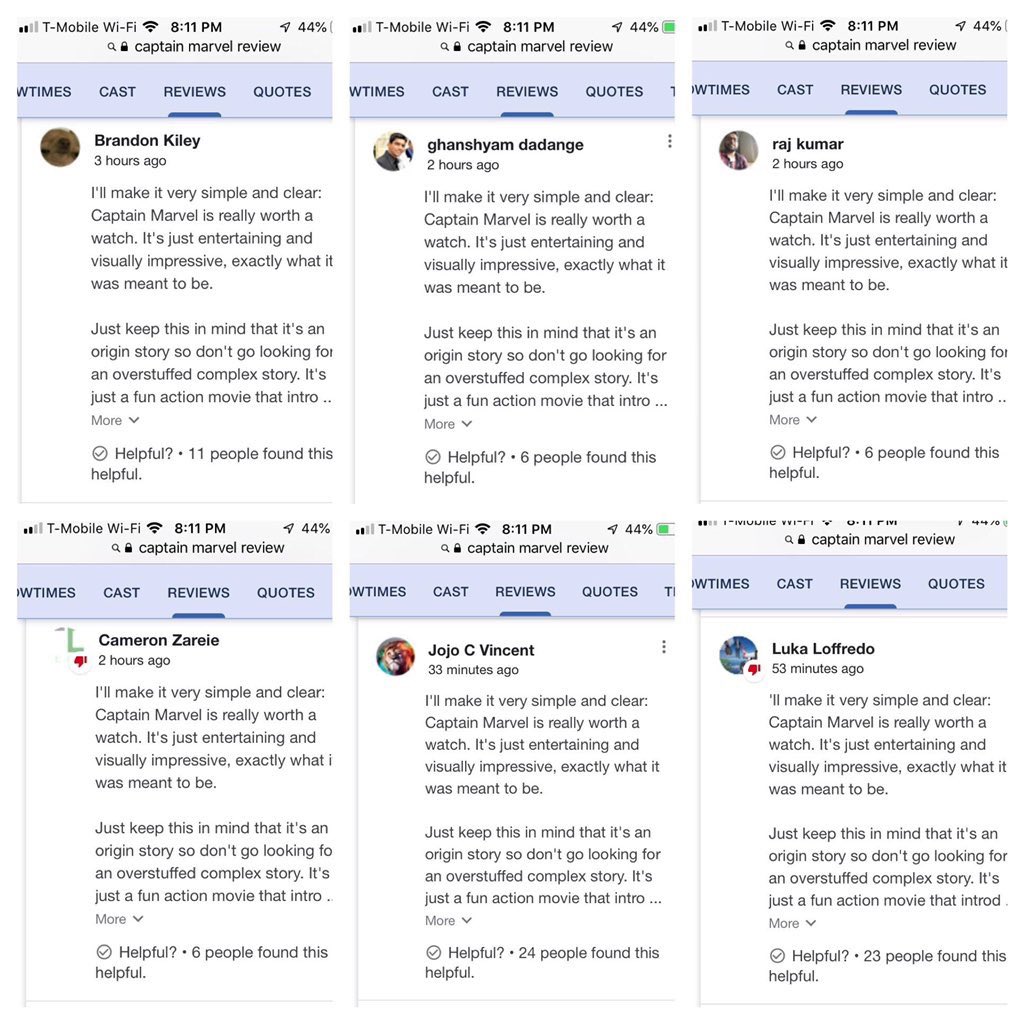 And what about several reports that theaters were near empty?  Does this seem unusual to anyone else? Would love to get an explanation how it performed so well with empty theaters. 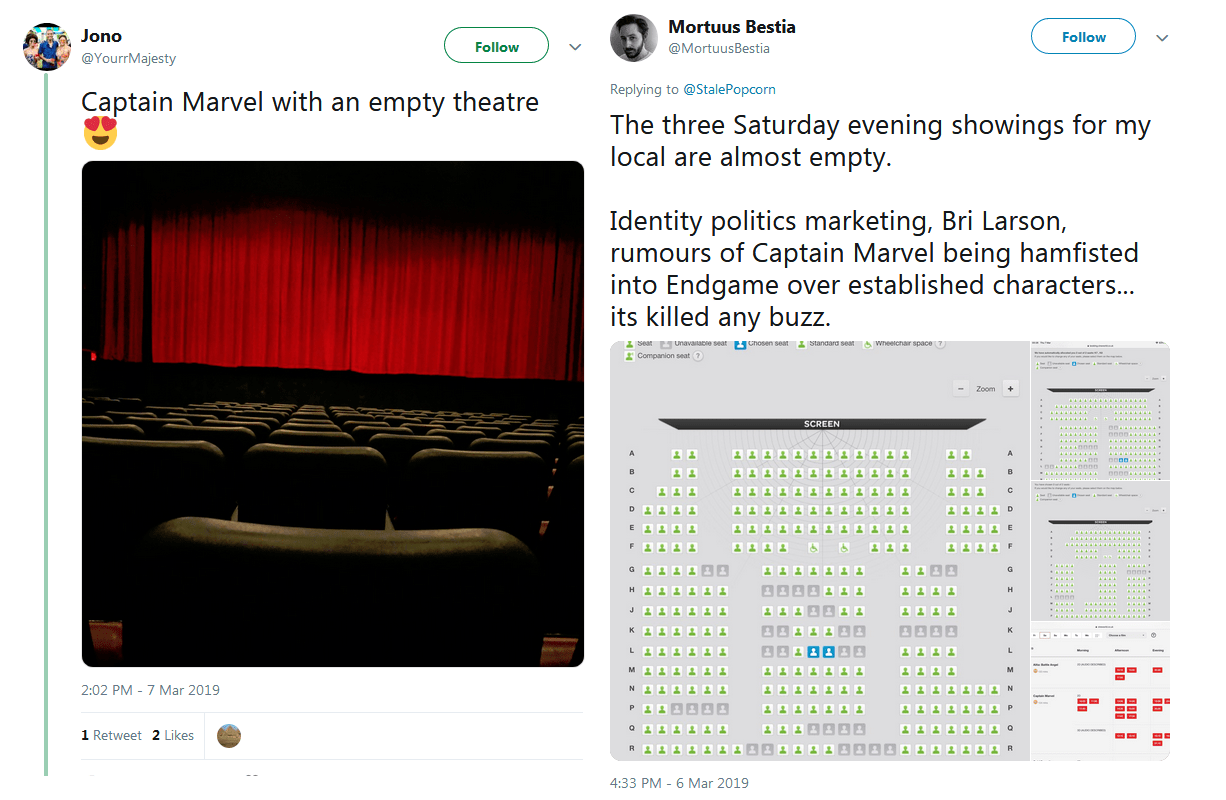