Can DC Salvage the Legacies of Jon Samuel Kent and Tim Drake? 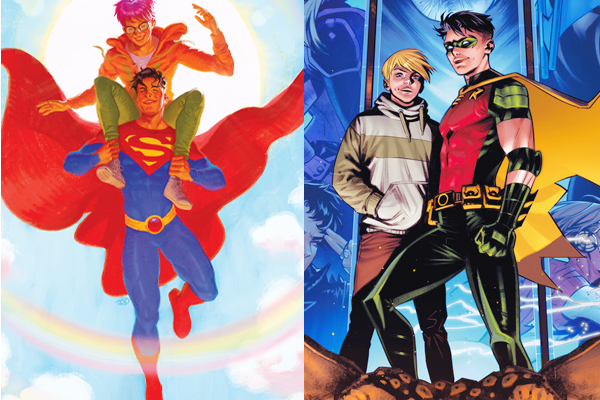 When I make reference to keeping things Colorful, I mean it, because even Language & Thoughts can be deemed offensive by these days standards.

Yes, before you decide to go wet yourself with outrage sauce, I am on the Autism Spectrum. So in this article I am going to be completely honest on how DC Comics has Damaged characters that people love.

So the first character I will start off with is Tim Drake (aka Batman side-kick Robin).  I must admit he was a character I was a bit hesitant to like at first because of some of the controversy between him and Damian Wayne. And there was a mix of real comic book readers mixed in with fake comic book readers who also disliked one over the other. It was hard to get invested.

I need to say this; it was Damian Wayne that helped bring me back to reading comics again. I enjoyed literally seeing Batman have a real son of his own, to which he must become responsible to his own flesh and blood, and it was no different than the same love he showed to his three adopted sons before him, including Tim Drake.

As I returned back to comics, one comic run that was recommended to me by people who enjoy Tim Drake’s character was Chuck Dixon’s, so when I had the time and the money, I made sure to grab the Robin run in collected trade paperback volumes. Seeing the character go from his early beginnings with Batman to where the run ended, led me to then go collect the Red Robin run which consisted of four volumes, I know I’m still missing some other Robin volumes centered on Tim Drake’s character, but I absolutely enjoyed everything I read, and developed a deeper respect for the character, even the period when Damian Wayne was a pain in the butt to Tim. 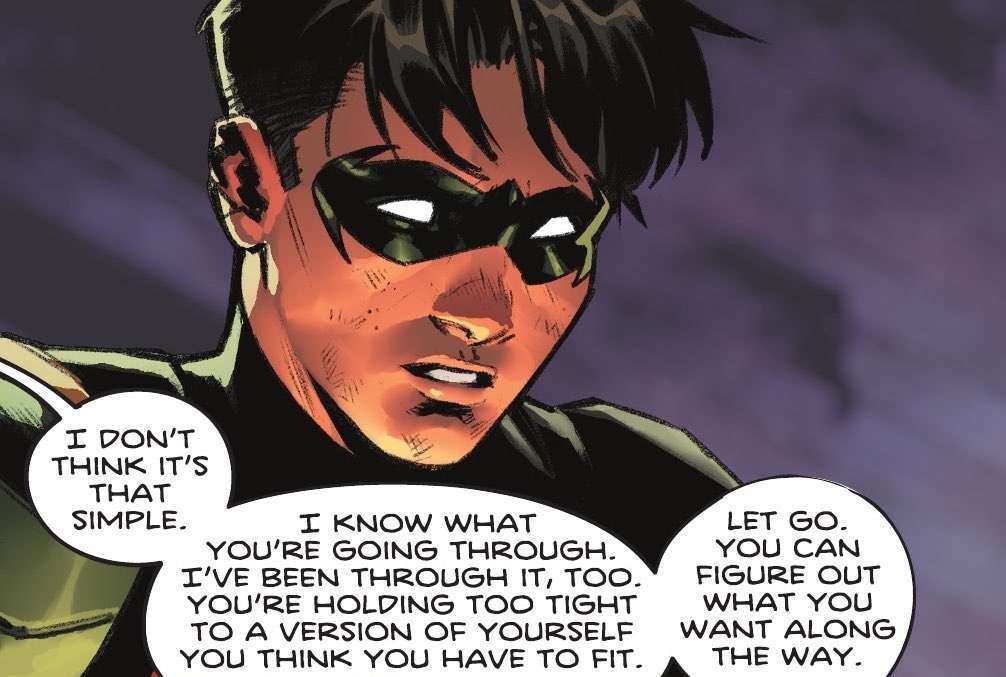 When it came to reading Batman & Robin Eternal, I had seen so much build up of his character, it led me to follow him into Detective Comics Rebirth which was written by James Tynion IV. After Tim left that title, he then appeared in the Brian Michael Bendis run on Young Justice. Even I disliked of how the characters were written by Bendis, including Tim Drake. He later reappeared in Batman when it was being written by Tynion once again, and he also showed up in Peter J. Tomasi’s run back in Detective Comics, which I really enjoyed.

In Future State, I found the fall of Tim Drake to be atrocious, as I felt like DC Comics had literally run out of ideas for him. That’s when one not-so-bright creator must have said “Lets make X Characters of Team Queer Eye For The Straight Guy,” while disregarding all previous LGBTQ characters in DC Comics, who were far better written, and could’ve used more public attention.

In my perspective, Tim Drake was Slave-Marked with the LGBTQ Group Colors, made into a badly written stereotype of that group, with zero organic set up. The retcon was forced on the audience, who were just expected to accept this, or be destroyed. 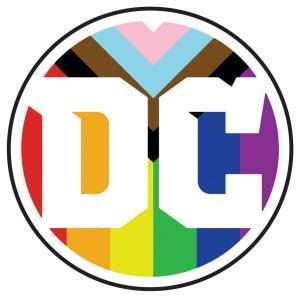 Whilst many fake comic geeks mixed in with some of the real comic readers who had followed the history of Tim Drake, claimed they liked the idea, others saw it as no different than just forced conversion to the cult of “X”.

Even some members of0 the LGBTQ community disliked the change, feeling it could lead to the persecution of their community once again, demonstrating how DC Comics, as well as Marvel Comics were doing a disservice to them by pandering to them during “pride month”. 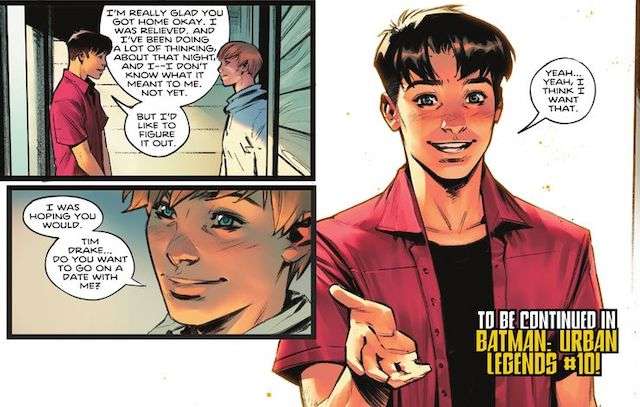 How To Fix Tim Drake!

Looking at the things that have been previously established in the DC Universe including its Multiverse, it could be possible to restore the original Tim Drake who was straight and still in love with Stephanie Brown. And to keep the current bisexual Tim Drake, DC could make it so both he and his boyfriend Gerard are actually from another multiverse. This could then keep both longtime, but disappointed comic fans happy, as well as those of the LGBTQ community.

But to make the story more solidified for fans of the Tim Drake & Gerard coupling, the publisher would need to show the audience which Multiverse they are originally from, therefore making more sense to the audience without losing their readership. 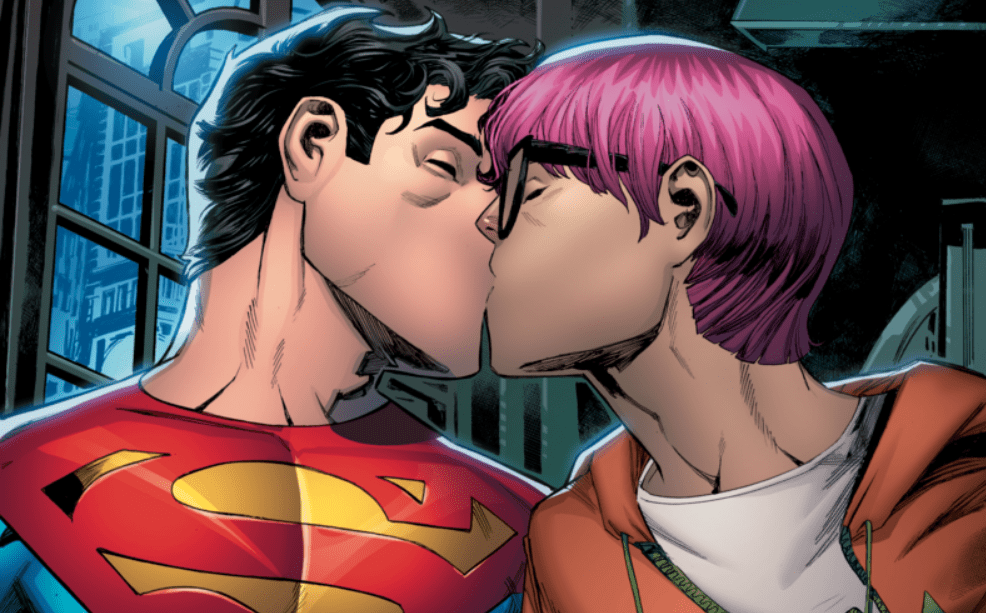 Ever since the Super Sons came onto the scene, I enjoyed everything I have read about the Superboy and Damian Wayne pairing. Once again it followed the same pattern as Batman, where we got to see Superman being a great dad to his son Jon Samuel Kent. I felt with both Dan Jurgens and Peter J. Tomasi at the helm of the Superman titles, and Tomasi finally doing some Super Sons runs, it was amazing. The storytelling was a Light In the Darkness for me at the time, and each adventure was incredible. Those comics helped me out of many depressing times I was going through during those runs.

But then Brian Michael Bendis came onto the scene, taking over both Superman titles, I followed his bastardized Man Of Steel run, along with his Action Comics, and Superman run until eventually the return of an aged-up version of what was called Jon Samuel Kent. Nothing could fix how terribly the character was written. It felt like a soulless copy of Jon Kent to me. Sure there were some interesting ideas during his run, and I will give Bendis credit for that, but many readers disliked the new so-called Jon Samuel Kent, including myself.

And destructive Didio did nothing to fix it. 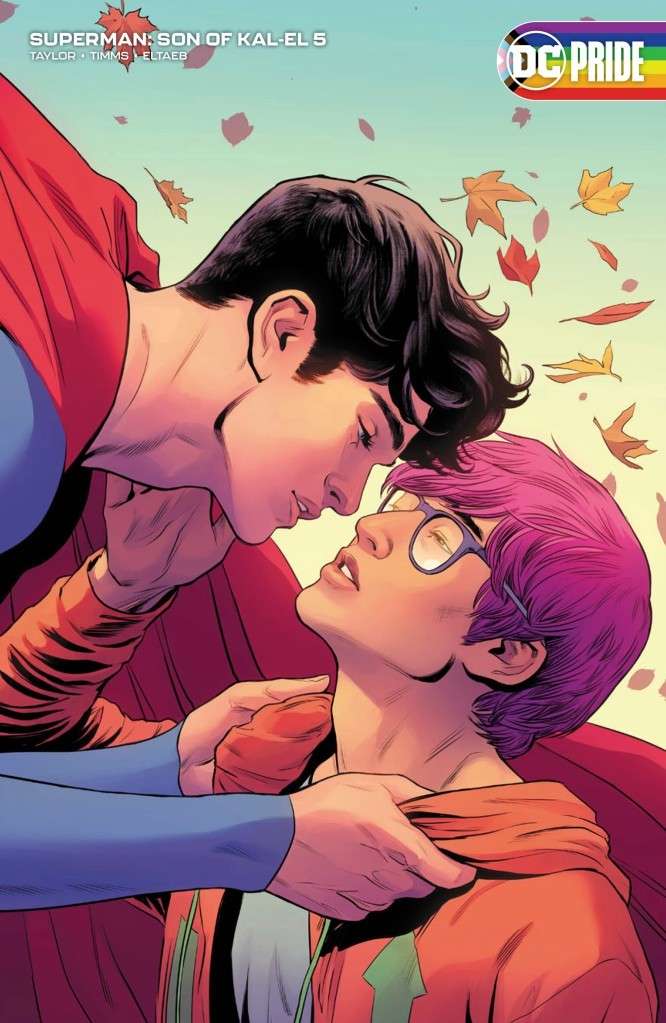 After the torch was passed onto Phillip Kennedy Johnson, who was quite attentive to the Super Sons readers, it appeared that he too didn’t like what Bendis had done to Jon Samuel Kent. Although he was unable to de-age the character, he did a brilliant job in at least making him feel likeable again during his runs of both Superman and Action Comics.

To those who argue the idea of Jon Samuel Kent is a fresh, new idea, I disagree. The earliest ‘Son Of Superman’ was seen in dream in 1967. Sure, the character’s name might not have been ‘Jon Samuel Kent’, but the earliest idea of Superman having a Son was back in Superman #197 from February 1967. 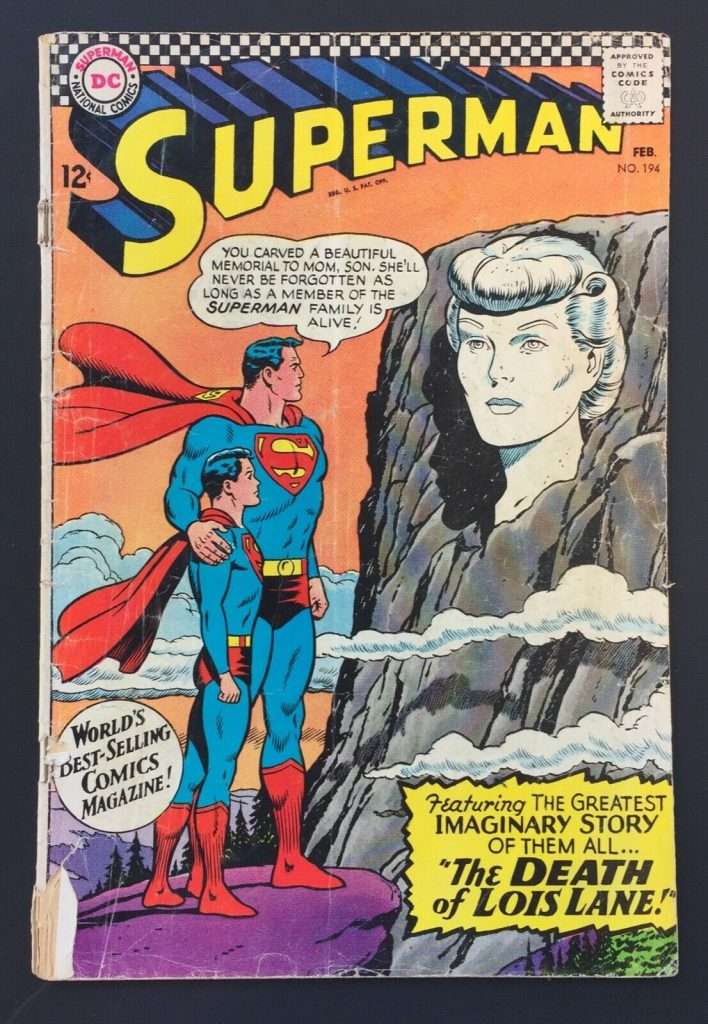 Later on in 1999 in an  Elseworld story called Son Of Superman, the character was called Jon Samuel Kent, only later on to be established in DC Comics canon when he was born in Convergence.

When I finally read the Convergence story telling the birth of Jon Samuel Kent by Dan Jurgens, I was in awe. As a veteran in the comics industry, Jurgens’ run led to many amazing stories especially in DC Rebirth, along with Peter J. Tomasi, and you could tell that their stories definitely bounced off each other.

Jumping forward to the present, where we now have Tom Taylor working on the so-called Jon Samuel Kent, once again some liking it, and others disliking, including the usual amount of fake comic readers, and actual comic readers.

To those who have read up on Superman also understand that certain Kryptonite types have different effects on him. One particular Kryptonite that has affected Superman in his past (as in Supergirl #79 by Peter David, Ed Benes and Alex Lei), was a Pink Kryptonite that turned him gay, until some other Kryptonite took him out of the drunken stupor of that Kryptonite. 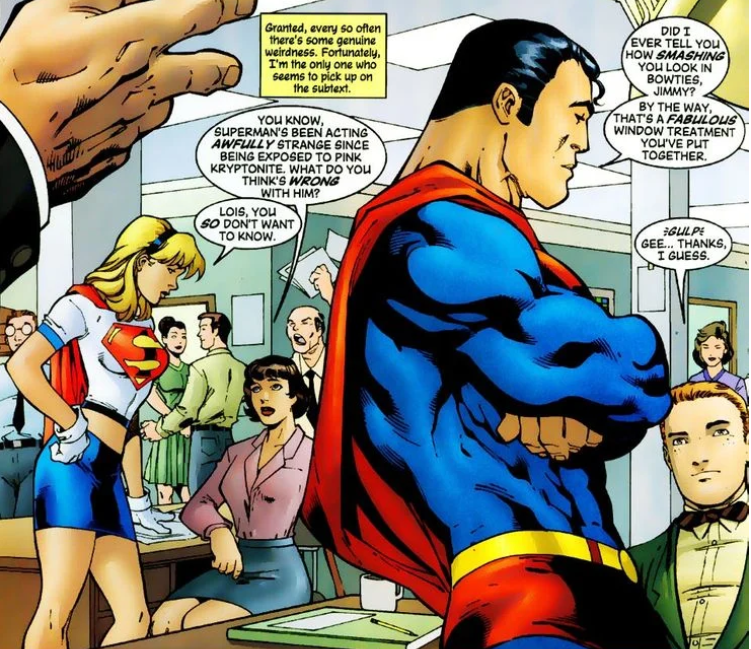 By keeping Jay Nakamura as an undiscovered villain in the present Son Of Kal El run, could work wonders for Tom Taylor’s run, along with even making his Jon Samuel Kent from another Multiverse would also work wonders as well, because you could make this Jon Kent addicted to pink Kryptonite, whilst keeping the real Super Son, the original Jon Samuel Kent before Bendis aged him up, stuck out there somewhere in the multiverse. Both Damian and Clark Kent could go on an adventure looking for him.

Like with what I shared with Tim Drake, the same could be applied to this present Jon Samuel Kent, and both could have memories that are shared throughout the multiverse to which the characters even recalls certain conversations with Damian Wayne. The current Tim Drake could even attempt to try to Manipulate Damian Wayne that he is real deal.

By the same token, both Damian Wayne and Jon S. Kent have both experienced the multiverse together, so there could also be certain things that Damian Wayne would pick up on, that don’t fit with Jon’s original character.

A more clever writer than I (or Tom Taylor or Brian Michael Bendis) could then bring the original Jon Samuel Kent back, and DC Comics could still have its cake an eat it too, by exposing the Bendis/Taylor Jon Kent as a multiverse version who stole the identity of the younger Jon S. Kent. Maybe they could bring back Peter J. Tomasi to establish the story that brings him back with Damian Wayne and Clark Kent. 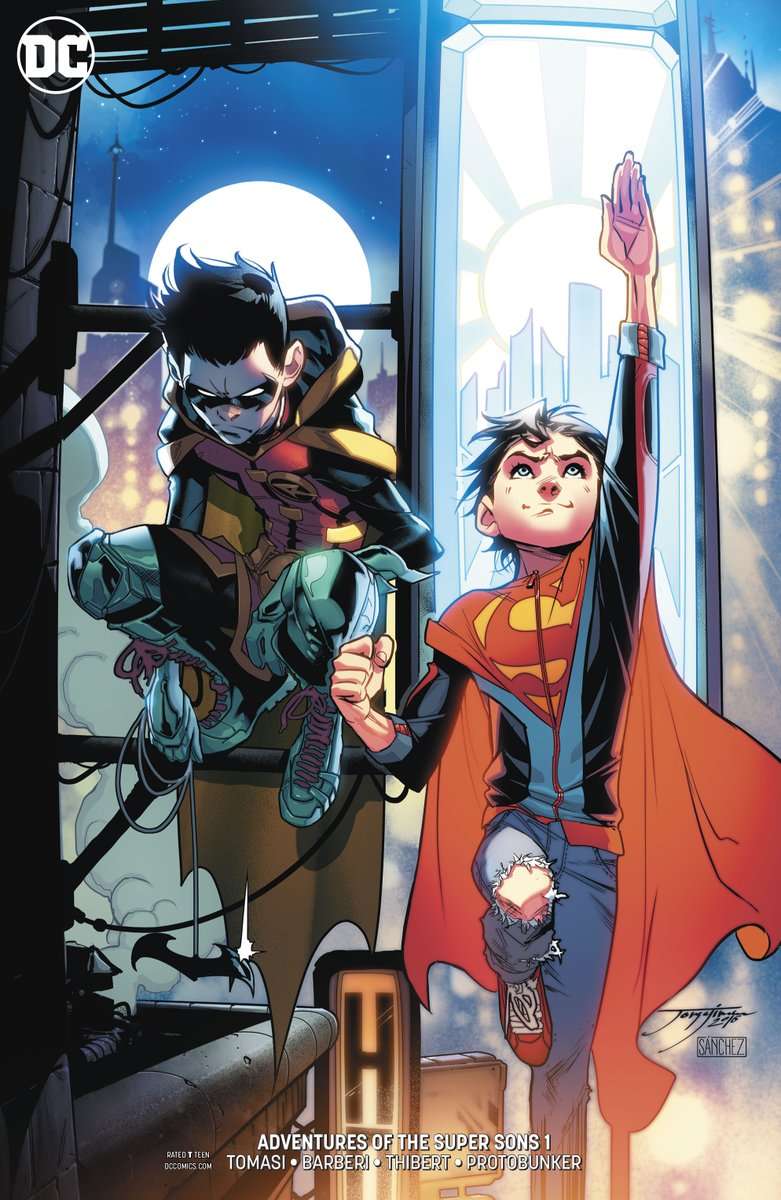 The LGBTQ community would still have a Jon Kent of their community from another Multiverse. Pink Kryptonite is his addiction, so this could work like so. He is hooked on pink Kryptonite, and can even smell it coming from Jay Nakamuras hair, so he’s also drawn towards Jay because of it, which in turn compels him to fall in love with the character.

This then releases DC Comics of treating its present characters like slaves of X,Y or Z Brand to appeal to, whilst still keeping the young, innocent Jon Samuel Kent intact to which he can be bought back and revisited, getting money from those original, now alienated Super Sons readers again and again. Tell me what you think.

Originally published and adapted from here.