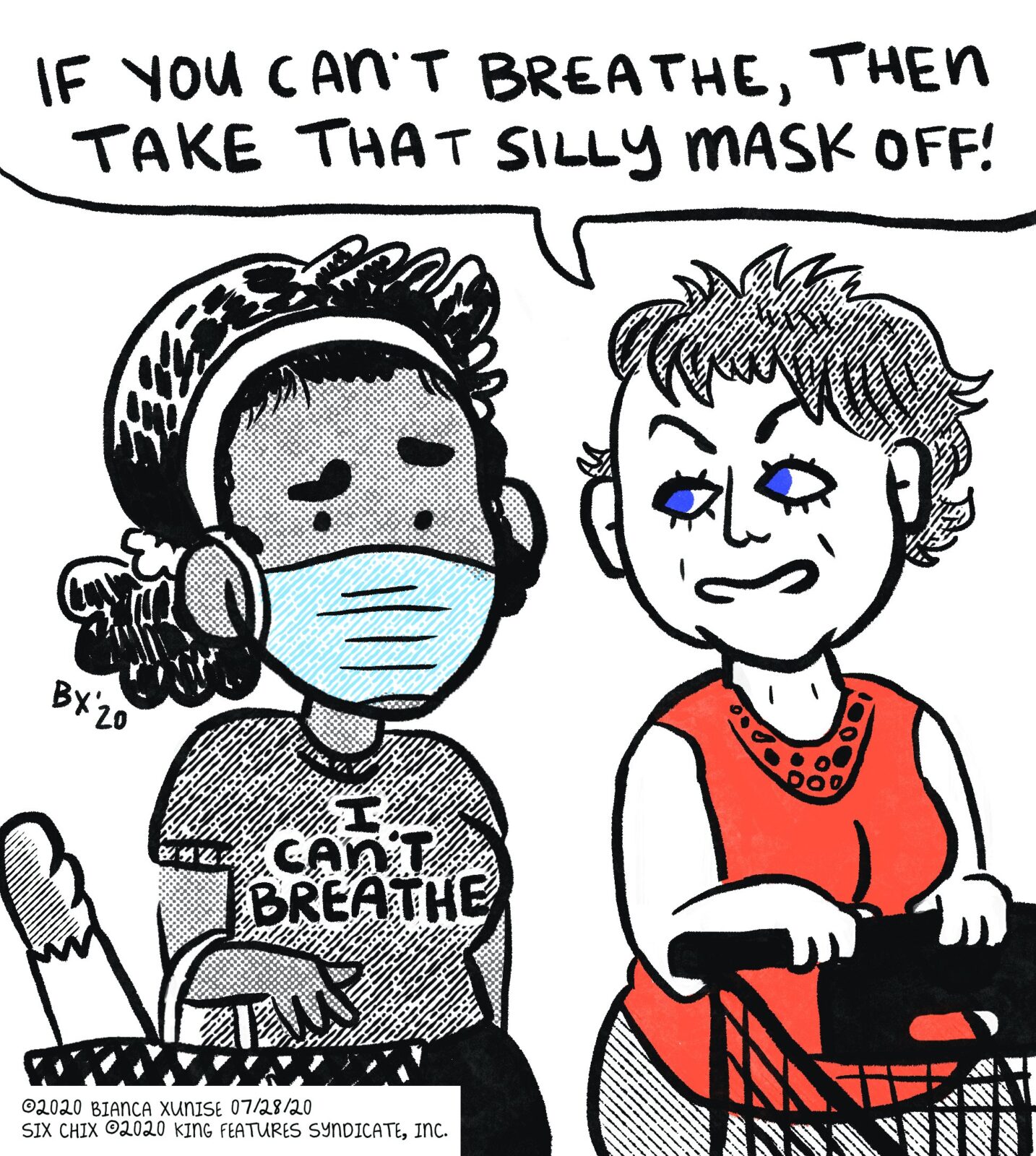 NBC news tells of a black cartoonist co-writing the Six Chix comic strip for the past 2 decades who had an installment withdrawn from newspapers because readers didn’t like the joke she’d put in. What’s interesting about this case is that the cartoonist appears to be a Black Lives Matter supporter:

The newest installment depicts a Black woman at a grocery store wearing a face covering and “I Can’t Breathe” written across her shirt — a nod to the death of George Floyd in police custody earlier this year, Xunise told NBC News.

A blue-eyed, older white woman says: “If you can’t breathe, then take that silly mask off!”

While the company is not allowed to share the names of its clients, Fougner said, an apology was printed at an undisclosed newspaper in the comic’s usual spot later in the week.

“We have notified the syndicate that provides the comic that we will no longer be running Six Chix in our newspaper as a result,” the apology read. “We’ve also requested an apology from them. Our apologies for a cartoon that reflected the exact opposite of what we stand for as a newspaper.”

Here’s the cartoon panel in question, along with the cartoonist’s response:

So apparently the angry responses got my comic dropped from some newspapers and an apology that I did not approve of is running in its place. For the record I do not apologize for this comic and this is censorship. https://t.co/rfIAMP6wO9 pic.twitter.com/TcLwcxJS1o 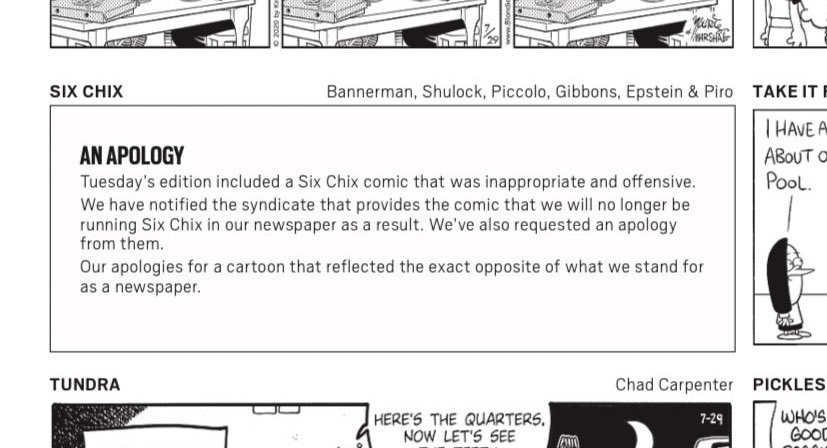 If I understand this correctly, what they’re implying is that white people don’t understand the hazards of Covid19, while making a questionable joke alluding the Floyd case? Let me put it this way. I don’t condone censorship, but it doesn’t put the cartoon panel above poor taste and criticism.

In response, Fougner, along with Xunise’s colleagues at “Six Chix,” defended the cartoon.

“Bianca created the July 28, 2020, ‘Six Chix’ cartoon to be a joke commenting on how Black issues are often disregarded as a personal problem and not a systemic issue,” Fougner said. “She is shedding light on two pandemics right now: one on race and another on COVID-19, and both are not being taken seriously while they are destroying lives.”

But do they believe it’s only whites who don’t have a clue? They certainly seem to think whites have no business finding the joke a bad one:

“I am being silenced over white feelings from a gag comic,” she said. “This is a complete step back in the wrong direction.” […]

“We spent due diligence explaining the ‘hard to grasp’ satire,” she said. “Please stop giving the benefit of the doubt to people who silence Black voices.”

But even satire can be in bad taste and form, and whites are no less vulnerable to censorship than blacks are. Just take a look at how “cancel culture” has become so prevalent in the past decade, and has affected plenty of whites, right down to the comics industry proper. On which note, the cartoonists don’t argue they’ve fallen victim to such a concept; they only complain of suppression to free speech based on their specific racial background. Maybe the newspapers shouldn’t have cancelled their comic strip altogether, and just insisted on an apology for making whites out to look brain-dead. But if the cartoonists are going to be so narrow, to say nothing of lionizing a bad movement built on vile ideologies, then they’re not making the case properly for why their strip shouldn’t have been subject to cancellation.

The point is: everyone, no matter their racial background, has responsibility to bear when it comes to Covid19 and racial strife, and anybody, no matter their background, can act irresponsibly. That’s why it’s ludicrous to make whites out to look like the only ignorant ones.