Beyond Comics: Specialty Stores Forced to Adapt in Today’s Economy 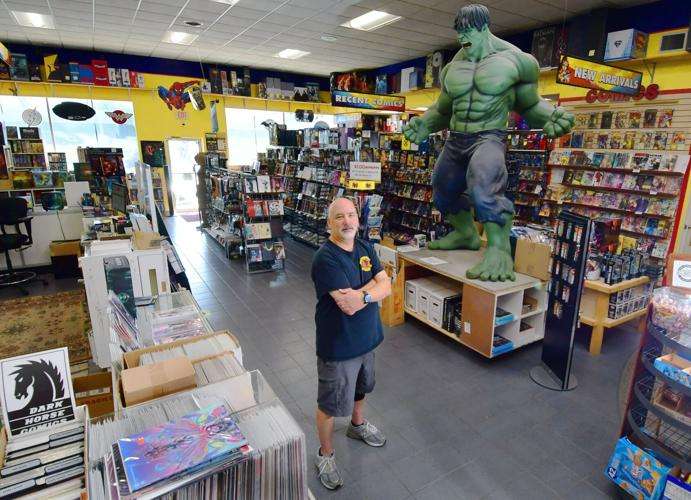 The Frederick News-Post wrote about a local specialty store that’s been in business for a quarter century, and wants to build up on more than simply the comics proper. It also tells of something decidedly in questionable taste:

[Jon] Cohen put his own twist on the covers: They connect to create one image. He hopes to expand this image to a total of six comic book covers with various publishers, and all the covers will come together to make a poster.

Okay, I get it. He’s alluding to gimmicks that were already practiced long before, like publishing comics sold in the past with covers that could connect-the-dots to form a larger picture like a puzzle. The earliest I knew of were at least 4 covers for Justice League of America from around 1985, and another 4 or so for the premiere issue of the sans-adjective X-Men series launched in 1991. But that’s cheap compared to the vitality of story merit on the inside, and only signals we have here somebody who’s seeking the collectors who believe this stuff will literally be worth its weight in gold directly within their lifetime, completely oblivious to how the obsession led to the market collapse of the mid-90s. Any store manager who continues to rely on this kind of approach only perpetuates the farce that’s obscuring the vitality of story merit. Interestingly, it also says that:

Graphic novels are also beneficial for collectors, who may not want to pull out their expensive or rare comic books and read them. Many comic collectors will buy expensive comics and store them in boxes or filing cabinets.

At least this points to something that should be a norm going forward, since pamphlets have become more of a hinderance than a helpfulness. But why should anybody want to get both? Even if we’re talking about folks with more room in their households, this is still laughable.

Beyond Comics has sold comics valued at $20,000 Cohen said. However, he doesn’t cater the store to collectors. Instead, he focuses on the average customer.

Cohen believes that women’s passion for graphic novels has been integral to the rise in popularity of his store. Just 20 or 30 years ago, Cohen recalls shop owners who would get angry if a woman came to their store.

When he opened the store, women were going to bookstores and reading novel-length content much more than they would read comic books, he said. He decided to design the store to seem like a bookstore, with many graphic novels at the front of the shop.

Now this is weird. Store owners really took offense at having lady customers? If it turned out they read the same content the men enjoyed, recalling New Teen Titans was said to have plenty of girls reading along with the boys, then what’s the fuss? It’s only if politically correct advocates turn the creations inside out that’s a concern, and there are, unfortunately, store managers who’ve caved to such a mentality. 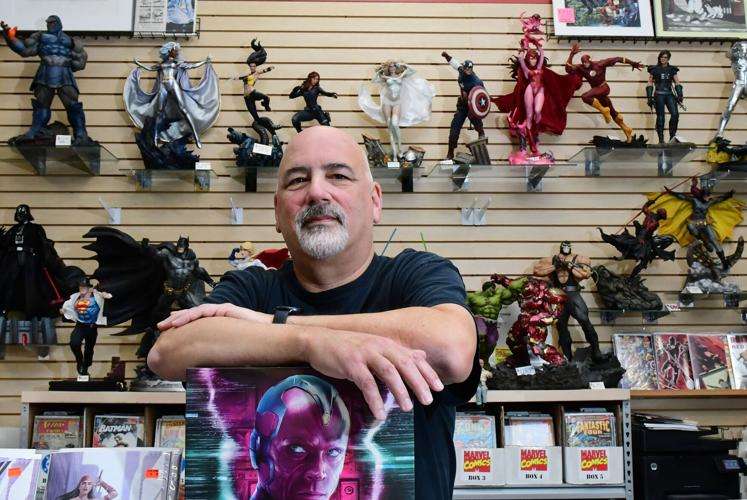 I do think the manager of Beyond has a good idea to sell more graphic novels. But that’s why it’s about time anybody getting into the sales profession must consider why a shift by comicdom to a more exclusively GN format would benefit the medium far better than the more cumbersome pamphlets. And better still, they could insist company wide crossovers and events have to cease, since they’re not benefiting the medium either.

Cohen wants the store environment to be welcoming for everyone. He doesn’t want anyone to be “hit in the face with testosterone” when they enter the store, he joked.

Comic book culture has grown to encompass all kinds of people. If Cohen had worn a superhero shirt when he was in high school, he would have spent the day in his locker, he said. Things have changed because superhero stories have become so mainstream.

They’ve also, most unfortunately, become very PC, going according to the dictates of the extreme left, and even if he was just jesting, I still think that’s running the gauntlet of legitimizing the left’s “toxic masculinity” propaganda, which has hurt the RPG fandom Dungeons & Dragons was famous for building up to boot.

“You don’t have to be an outcast or introvert to read comics [anymore],” Cohen said.

Even today, it’s unlikely a lot of the majority of people on the left not considered “outcasts” care to read what’s on the market, neither old nor new. Then again, even on the right, not everyone cares about it either. To say the medium’s found recognition within a fortnight risks being naïve, and besides, as noted before, the blockbuster movies based on the Big Two’s products have been losing ground lately, due to how woke they’re becoming. Why, do these non-outcasts give a damn about Joe Quesada’s insulting mistreatment of Mary Jane Watson in the past 2 decades? Even today, chances are very slim they find it disappointing, the reversal of the status Quesada led to in the past 4 years notwithstanding. And if it happens again, you can be sure that in the long run, they still won’t care.

TV shows and movies don’t help sell comic books and graphic novels since, most of the time, the content doesn’t match the storyline of a comic book, he said, but they do help legitimize the product.

When newcomers to comic-based content come into his store looking for the comic storyline that a Marvel film or TV show is based on, Cohen or one of the other staff members try to recommend something that they might enjoy. They aim to cater to everyone, not just hardcore collectors.

Which is fine in itself, but anybody who truly believes most would-be consumers recognize the product’s validity in the long run are deluding themselves, in an age where PC’s become so rampant. Let’s remember that even today, there’s only so many moviegoers who refuse to consider even Japanese animation a legitimate art form, even as they’re ostensibly willing to watch live action adaptations. That aside, do these store managers ever recommend Golden/Silver/Bronze Age comics to new customers? If not, I just don’t understand what the point is here.

Since we’re on the subject, the same newspaper had a contributor, originally a UK native, announcing he’s going to be writing monthly about comicdom, mostly the local scene near Baltimore, and he said:

What arts and culture medium has better portrayed the American experience than comics? Comics aren’t entirely a uniquely American creation, but nothing has charted the currents of the American cultural experience as comics have since their beginnings in the 1930s.

But I’m not, by any means, a comics expert. What I hope to do along this journey is investigate this field we love and bring you along on the way. We’re going to meet local creators, movers and shakers, talk the business of comics, visit some of the regional cons (the Baltimore Comic Con and SPX in Bethesda, for sure), discuss the creativity and art of comics, and, overall, just indulge ourselves in this exciting industry.

Well if he’s not a true expert, that’s hardly getting off to a good start. You need some understanding and research for the medium in order to clearly qualify for comment on the topic, and there’s only too many would-be geniuses in the MSM who don’t. He does say, however:

I’ll be trying to stay away from news about the Big Two and other large comics companies (unless they’re from the region or impact the comics scene here). Too much has been said about them already, and there’s very little I can add to that conversation.

I won’t ever insult your intelligence by saying “they’re not for kids,” because if you care at all about the medium, you already know they’re for all ages, and if you don’t — well, I’m not trying to convert you.

On this, no need for too much concern, because I realize there’s always room for adult content in the art form. Where I frown, however, is whenever violent content is played for cheap sensationalism, and yes, that does include sexual violence. But even the independent scene could use somebody who’s more of an expert researcher to comment on the medium, and if the columnist hasn’t done that before, who knows if he’ll be fit for the task he says he’s setting out to work on?

Grant Morrison Pens Bizarre Novel About a Conspiracy of Drag Queens
What Anthony Mackie Wants to See in Captain America: New World Order
At the Memphis Comics Expo "Creators Come First!"
Is it Too Late for a Scarlet Witch Solo Marvel Comic Series?
Comics Writer Jim Zub Just Made a Fool of Himself... Again
Paul Levitz & Alan Grant Assemble the Original Avengers in New Limited Series
How Political Comics with "Important Messages" Have Become a Joke