Earlier this week “Game of Thrones” showrunners David Benioff and D.B. Weiss became the latest directorial talents to depart ‘Team Star Wars’ before their planned film was released, joining the ranks of Josh Trank, Gareth Edwards, Colin Trevorrow, Phil Lord and Chris Miller by being dismissed from Disney’s Lucasfilm productions that they were at one time proudly announced to be shepherding. After years of grumbling from the fans and the more rabid ‘fandom menace,’ only now is this high rate of turnover raising eyebrows among those in a one-time compliant mainstream media who are beginning to ask questions about the management style of Kathleen Kennedy.

Rumors are beginning to swirl that the pair were actually released after the abysmal reaction to their final season of Game of Thrones, but those rumors, like what follows here, should all be take with the knowledge that no one making these claims is willing to go on the record. 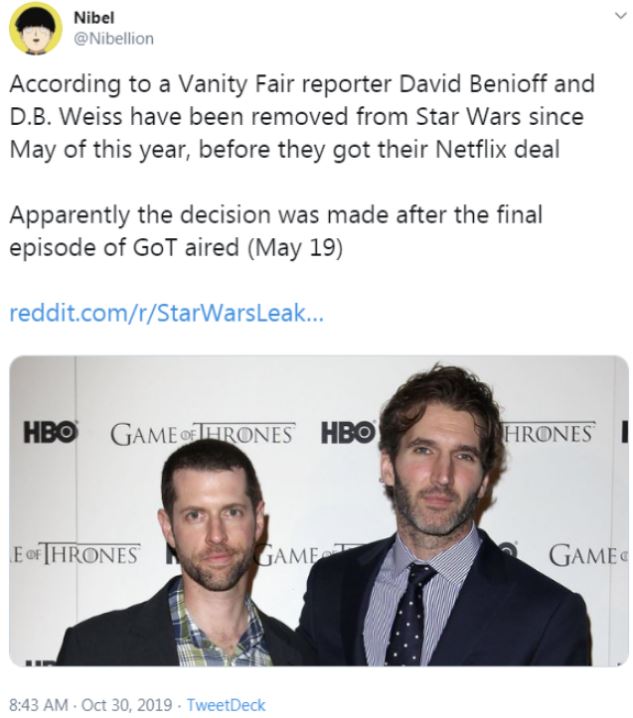 Of those who are willing to speak about what they know, there’s Justin Kroll of Variety who posted this yesterday at Variety.

When Kennedy and her team pitched these filmmakers on joining the “Star Wars” family, sources say they were promised some measure of creative control. However, multiple insiders said new ideas were commonly shot down as Kennedy and her team were only looking for people to stick to the company line. If disagreements about the direction of the film became too intense it usually led to the person leaving the project rather than an attempt to find common ground. The Lucasfilm brain trust would often turn to new writers such as Lord and Miller before ultimately retreating to old standbys such as Lawrence Kasdan, the “Empire Strikes Back” writer who is still seen as a key sounding board on the productions. Even if the lack of an appetite for creative risk isn’t to blame, there are questions about whether the abrupt departures of key talent points to a problem in how directors and writers are being vetted and hired.

Benioff and Weiss had ambitious plans to take the “Star Wars” universe in a new direction, one that would exist apart from the Skywalker family saga that comprised the franchise’s centerpiece nine-film series. The “Star Wars” period the pair was interested in exploring was how the Jedi came to exist. However, Lucasfilm executives and the creators begin to see their visions for the films diverge during meetings last summer. News that the pair had signed a massive $250 million production deal with Netflix was a signal to many that they were eager to explore other opportunities. It also brought pressures. When the pact was announced, Netflix said it was aware of the duo’s commitments, but insiders say they were also wary of waiting as much as four years for them to wrap up work on “Star Wars.” The streaming service wanted Benioff and Weiss to focus on creating exclusive movies and shows for them, particularly when they looked out at a streaming landscape that is growing ever more competitive with the launch of Disney Plus and HBO Max.

As relations with Benioff and Weiss curdled, the studio had begun taking general meetings with other writers on possible “Star Wars” pitches — it’s unclear if these were just sit-downs exploring other related productions in the franchise’s cinematic and streaming universe. The departure of the two likely sends the studio back to the drawing board with the future of the series more uncertain than it has been since Disney closed its $4 billion deal for Lucasfilm in 2012. This December brings J.J. Abrams’ “Star Wars: The Rise of Skywalker” and with it the end of that nine-film series. Abrams has been one of the few directors who has been able to successfully navigate the Lucasfilm landscape, but he has a mega-deal with WarnerMedia that will likely mean he won’t be making any more “Star Wars” films. Rian Johnson, who oversaw the more divisive “The Last Jedi,” was said to get along with Kennedy and has maintained that he had creative freedom, but fans balked at some of his decisions. He had been hired to oversee a separate trilogy of “Star Wars” films, which remains in development, though it’s unclear how far along work is on the production. On the streaming front, in November, Disney Plus will release “The Mandalorian,” a series about a mysterious bounty hunter that is getting some positive buzz, and the company is prepping a show centered on Ewan McGregor’s Obi-Wan Kenobi.

However, Disney was clearly stung by the box office failure of “Solo,” a Han Solo origin story that led to the high-profile firing of Lord and Miller. In a recent interview with The New York Times, Disney CEO Bob Iger said, “I just think that we might’ve put a little bit too much in the marketplace too fast.”

Iger is clearly spinning publicly-approved responses to excuse Disney’s failure to properly handle and exploit their multi-billion dollar franchise. No doubt Lord & Miller felt a bit of joy at what seems like comeuppance for Solo’s poor showing following their firing. Since that box office failure, the creative decisions of those in charge of steering the Skywalker saga are being scrutinized after Rian Johnson’s severely divisive installment, The Last Jedi. There is some skepticism that Johnson is still truly under contract to helm his own trilogy saga after how his sequel was received. Does Disney really value Rian Johnson more than Benioff and Weiss?

Kroll goes on to mention that he’s heard that at several top talent agencies that many of the most sought after filmmakers could be wary of working with Lucasfilm now that the odds seem to indicate that it will end with an embarrassing dismissal. Now that it’s recently been announced that Kevin Feige, the successful helmer of the Marvel Cinematic Universe, will work on an upcoming Star Wars film himself, hopeful fans believe he might have been brought in to help stabilize Lucasfilm and take over for Kennedy, but Kroll’s sources insist there are no plans to give him a larger role at Lucasfilm. That may change if his film is the most successful Star Wars picture post-Lucas.

But as interesting and intriguing as all the behind-the-scenes drama is regarding the rotating creative teams, the fact remains that what has most damaged the Star Wars brand for Disney is the storytelling, the direction, and the films that were produced and released. No one will argue that The Last Jedi looked spectacular, but it divided the fans in spectacular fashion.

As David Harsanyi recently penned over at The Daily Signal:

If someone asked you to cogently explain the narrative of the sequel trilogy, could you honestly do it?

“The Last Jedi” has been on Netflix for months, and this lifelong fan—a fan who paid to see “The Revenge of the Sith” in theaters at least three times—hasn’t even been able to rewatch it once for free.

To put that in perspective, I would rather binge entire seasons of an English baking show than sit through a $300 million sequel to my favorite childhood movie.

These failures might be forgivable if the space opera made any sense. Instead, we are left to watch characters spin their hyperdrives while J.J. Abrams performs a mercy killing of one original character per movie.

May they rest in peace.

If you think that was harsh, the responses posted after Harsanyi’s article over on Yahoo! News were even more salty. 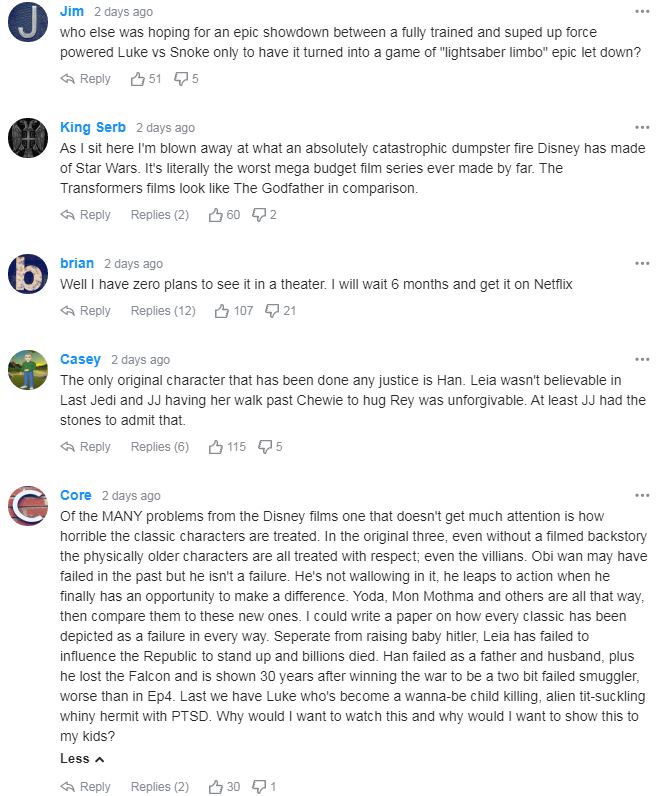 These are longtime fans of the source material. If you aren’t able to please the fans more than this, then you’ve got serious problems. They know the source material, and while some creators complain that it is just too difficult to please everyone while they still cram sequels with fan-service, other creators endeavor to remain above the fray and keep their heads down, while still some others gleefully get down in the mud with the angry fans and mock them. It’s as if they are the very trolls they seek.

And while it can be argued that Solo became a box office failure, the other three Disney Star Wars movies have each been box office blockbusters, succeeding financially, albeit in lesser fashion, in spite of the drama and divided fan culture. The question remains that if this pattern of high attrition and dwindling box office results continues, how long can the Star Wars brand remain potent for Disney?

We’ll see what happens when The Rise of Skywalker hits theaters in a few weeks and The Mandalorian debuts on Disney Plus next month.