Captain Marvel star Brie Larson continues her absurd activism with an interview in Marie Clarie where she drags in completely unnecessary identity politics:

I was thrilled you requested me to interview  you. I thought, ‘This is game-changing’. It’s the biggest opportunity I’ve had. Nobody usually wants to take a chance on a disabled journalist.  I’d love to know what your particular reasons were.

‘About a year ago, I started paying attention to what my press days looked like and the critics reviewing movies, and noticed  it appeared to be overwhelmingly white male. So, I spoke to  Dr Stacy Smith at the USC Annenberg Inclusion Initiative, who put together a study to confirm that. Moving forward, I decided to make sure my press days were more inclusive. After speaking with you, the film critic Valerie Complex and a few other women of colour, it sounded like across the board they weren’t getting the same opportunities as others. When I talked to the facilities that weren’t providing it, they all had different excuses.’

I’m wondering, does she realize that, no matter what the racial background of the critic or the gender, that’s no guarantee they’ll like the movie? Does she also realize she risks alienating potential customers, as though it weren’t bad enough she accused male reviewers of not understanding the abortive adaptation of A Wrinkle in Time because it “wasn’t for them”? What about any women who reviewed it? She really thinks men don’t understand? This is not doing anything to help her cause either. Let’s be clear. If she wants more reviewers of different race to come along, that’s perfectly fine. But it shouldn’t be at the expense of the white reviewers, and I honestly take issue with the notion they’d overwhelmingly be men, because there’ve been plenty of women over the past decades reviewing film, including Janet Maslin of the NY Times, and the late Pauline Kael of the New Yorker. That’s why I don’t buy the part about an overwhelmingly male presence.

She and Marvel films producer Kevin Feige also spoke with the Hollywood Reporter, and what they have to say makes me think they dislike Wonder Woman’s costume, the success of Gal Gadot’s film and use of the outfit by young cosplayers notwithstanding. Let’s start with this:

The film, written and directed by indie veterans Anna Boden and Ryan Fleck (Half Nelson) in their studio debut, is informed by the version of Danvers in the comics written by Kelly Sue DeConnick, who re-envisioned the character in 2012 as a female Chuck Yeager, with a cocky edge and humor. DeConnick’s feminist read on Danvers — her insight that a female fighter pilot ought to, say, wear pants to work rather than a swimsuit — inspired a backlash among some male fans, but it’s the take that won over a new, more female-skewing audience for the comic and, ultimately, Larson. On one of her early meetings at Marvel, Feige recalls, Larson saw back issues of the comic displayed on the walls. “If you look at the comics, the further you go back, the less clothes Carol Danvers seems to be wearing,” Feige says. “Oftentimes it’s a one-piece bathing suit basically, with outrageous comic proportions. … Brie pointed it out on the wall, and we went, ‘Yeah … just so you know, that’s not what we’re doing.’ She goes, ‘OK. I didn’t think so, but I’m glad you said that.'”

I’m not sure how they can say it won over either sex if one series after another got cancelled for low sales. Besides, if most female-skewing audiences had no issues with Wonder Woman’s costume, in the comics and 2017 movie, then why would this trade journal make themselves sound so silly by claiming the ladies all embraced the modest costume? Better yet, why no mention of the ultra-masculine character design that was noticeable a few years ago? Did they also embrace that? We must really be missing something here.

And what was wrong with the 2nd costume design, considered the most appealing, which actually shows less than WW’s? Come to think of it, what’s wrong with even the 1st? IMHO, nothing. This sounds like the blather of somebody who thinks sex appeal is inherently wrong.

Larsen’s said here that she’d gone to see the WW movie starring Gadot, but if she didn’t like even Carol’s less revealing 2nd costume, as this article hints, then it’s hard to believe she liked WW’s either. If I were original artist H.G. Peter, I’d be insulted.

Some reactions to the marketing for the film suggest there still exists a gender divide among the Marvel audience, as when some male fans on social media complained that Larson wasn’t smiling in the trailer, with one Twitter user going so far as to Photoshop a smile onto her face. Larson responded to the “smile more” critique — one familiar to many female politicians — by posting an Instagram story that featured Marvel posters of male heroes with idiotic grins Photoshopped onto their faces.

Umm, doesn’t that sound an awful lot like acting out of spite? Besides, even male politicians should smile more often too. She and the paper act like female fans of pop culture don’t care about acting talent and skills.

Is Brie Larson capable of any other facial expression other than this one? That face – talk about a piece of wood. #FirstImpressions #CaptainMarvel pic.twitter.com/bLkPMjaEP2

The whole time her face looks like she’s going to a relatives wake and her powers look like they just got back from the CW. I’m good.https://t.co/q1tOp8wKpb

I agree, Captain Marvel needs to smile more, so she fits in with the rest of the universe pic.twitter.com/CAJ7MzUOxK 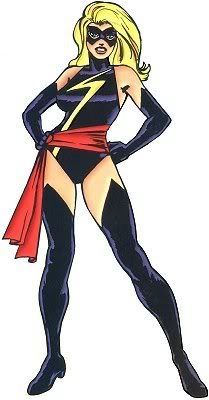 Ah, and now, since I’d brought up the part about the WW movie, here’s the paragraph about it:

In the summer of 2017, after she had been cast but before Marvel began shooting, Larson went to see another superhero movie, DC’s Wonder Woman, in the theater and found herself sobbing. “As a kid, I wanted to be an adventurer,” Larson says. “I wanted to be a smart-ass. I wanted to get my hands dirty. But it wasn’t until being in the theater seeing Wonder Woman … I was like, ‘Why is this making me cry so much?’ I realized ’cause I hadn’t had that, and there was a kid in me that was like, ‘Oh, my God. I can do that?’ ” (She obviously wasn’t alone: That film grossed $822 million worldwide, drawing 16 percent more female moviegoers than the average superhero movie, according to the moviegoer data analytics company Movio.)

And all those lady filmgoers clearly had no issue with WW’s bustier-style costume. So why all of a sudden does Larson have one when they get around to producing a film based on the lady who’s the real Ms. Marvel? There’s some kind of disconnect going on here.

She later tried to walk back her attack on white men:

Though it’s easy to forget in an era of social media and extreme political polarization, there was a time when a movie star opening a giant, four-quadrant film was expected to smile through a press tour and not say anything that might offend ticket buyers. Larson, however, has not shied from potentially divisive issues. While accepting a prize for excellence in film at the Crystal + Lucy Awards in the summer, she highlighted the demographic homogeneity of the Hollywood press corps in a particularly pointed speech. “Am I saying that I hate white dudes? No, I am not,” Larson said to a ballroom full of journalists. (According to Feige, Larson advocated behind the scenes to ensure that the junket for Captain Marvel included female journalists of color.) At the Oscars in 2017, she opted not to clap for best actor winner Casey Affleck when presenting him with his award, a decision that many read as Larson’s rebuke of the actor, who had settled a pair of sexual harassment civil lawsuits. “I won’t talk about it,” she says of her decision not to clap for Affleck. “It’s not my story to tell.” Explaining why he would not consider asking a Marvel star to sand down her edges, Feige says, “You hear the stories of these old studio heads trying to control everything, and as far as I can tell, it always blew up in their faces.”

Well kudos to her for avoiding Affleck over any offenses he committed, but if she really doesn’t have a problem with white “dudes” (why must she use such a dumb slang?), then why even bring it up in the first place? Her insistence on having less white critics on a press tour only spoils her defense. There’ll always be critics of different races and definitely female ones.

I merely smiled at a TSA agent and he asked for my phone number. To live life as a woman is to live life on the defense.

And wouldn’t you know it, one of the awful IO9/Gizmodo’s writers sided with her and Feige’s propaganda:

Frankly, we’re glad too. Not only is Larson’s Captain Marvel outfit extraordinary—with or without the mohawk helmet—but it also has made for some amazing everyday fashions. If only I had, you know, disposable income.

Funny thing about some of the fashions displayed in the second link, they show even more skin than the actual outfit used in the movie does. Suggesting another double standard at work. I guess they’re not fans of WW’s costume either. 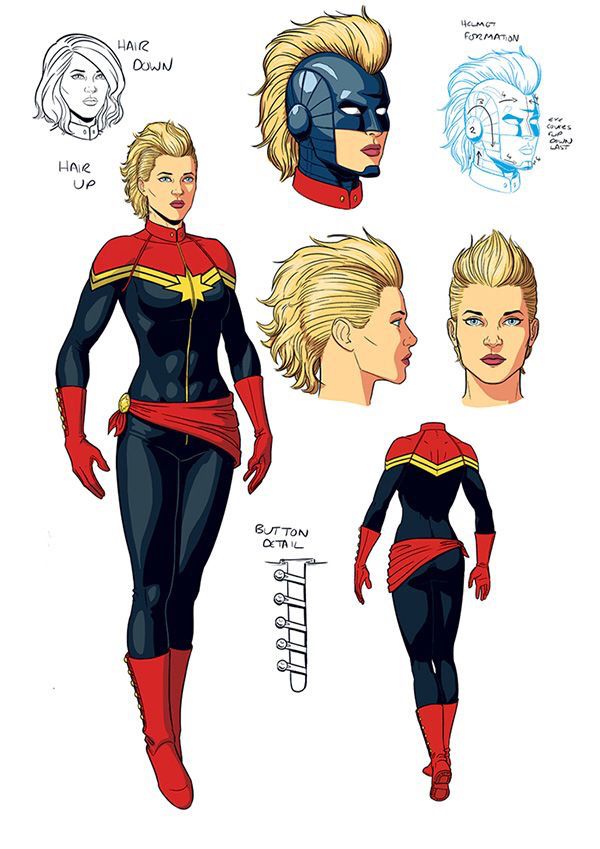 And for all we know, this could wind up being the least successful movie produced under the official Marvel studios banner, because somebody had to drag identity politics into this instead of concentrating on the entertainment value first and foremost. Feige’s willingness to go along with this doesn’t help matters either.

Update: and now, which character does Larson want to appear in a sequel? 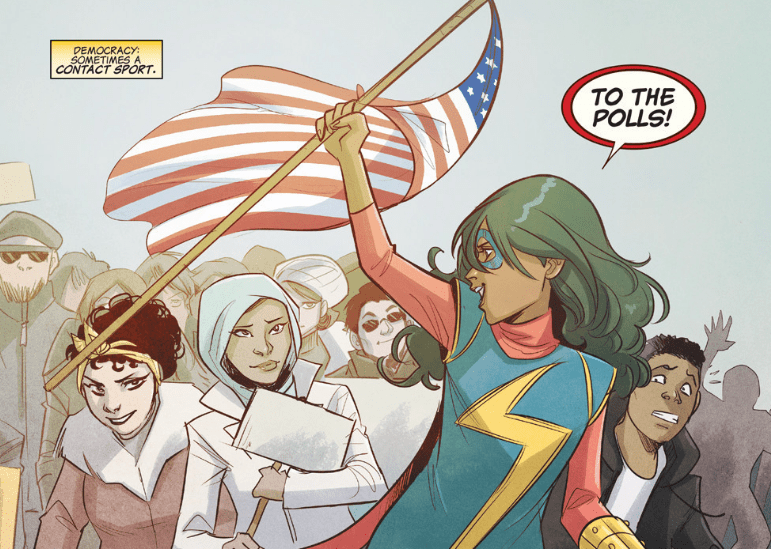 She wants the Muslim version of the character? And presumably, with the Islamic components retained? Well, I think this says pretty much all we need to know about where Larson really stands on “feminism” as we know it. The more I hear about this movie, the less interested I am, what with the way the star promotes it and all. Where is the original female Captain Marvel?

You know, the black woman who was once the leader of the Avengers, Monica Rambeau?

Is anyone really shocked by this?

No wonder those pesky #CaptainMarvel shills have been so quiet today…#CaptainMarvelChallenge #MCU pic.twitter.com/wdOUrGCU2L

Update 2: and after Larson’s “activism” became so vehement, now box office predictions have gone way down, by nearly 50 percent. It should be a lesson, that when you politicize a production and imply you want to exclude anybody, it can only lead to what’s now called “get woke, go broke”.