And it’s unlikely it’ll be for altruistic reasons. The Valdosta Daily Times writes about this revival of an obscure Golden Age creation from 1939, and it sounds like they’re turning the character inside out for the sake of liberal PC:

Archie Comics provided this background synopsis of the character: “By day, he’s Walter Whitney, a fledgling theater columnist with a wild imagination, but by night he’s Bob Phantom, the ‘Scourge of the Underworld’ — or is he?

“Using his power to become immaterial, Walt beats up criminals and then breaks the news of his exploits in his newspaper column … but New York City is not as it once was and with less crime that means less news. So, if there’s no crime left to fight, there’s only one thing to do: create enemies. Is Bob Phantom really the Scourge of the Underworld, or its leader?”

So, Bob Phantom returns … with a twist.

“(James) is the exact type of person you want on a project like this,” said Jamie L. Rotante, Archie Comics senior director of editorial. “He’s dusting off Bob Phantom’s cobwebs and giving him a second chance to be a main event player.” 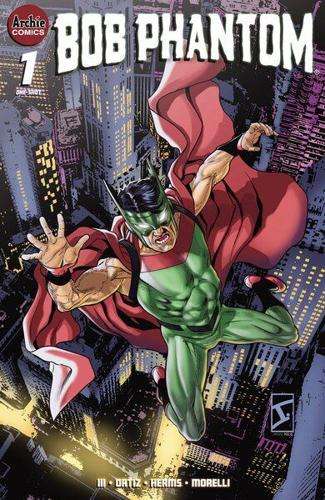 For leftists, that figures, seeing as the writer in question is a Netflix writer. That’s only a strong warning to everyone else why they might not want to look this over. Because:

“Boasting a multitude of superpowers and talents, he fought crime by night and worked as theater critic and gossip columnist Walt Whitney by day, often antagonizing police,” according to the comics company statement. “In the new version, James III explores the possibility that Walt’s anti-authoritarian streak may run deeper than the surface as he creates news in order to report it.”

Well, does this suggest this’ll be an anti-police screed of the kind that’s become common in the past 2 years, ever since Antifa/BLM rampaged through leftist-run cities around the USA? With all the destruction that’s continuing till this day, increasingly unreported by the MSM, a story setup like this in the new take on an old comics tale is the last thing we need. And then, Archie has the gall to make it look like New York City’s got no serious crime left to worry about, when here, mayoral incumbent Eric Adams has done little to improve the shambles left behind by Bill de Blasio, with the way illegal immigrants are still largely accepted in the area, at everyone else’s expense.

This confirms Archie’s firmly in the far-left camp, now exploiting ancient properties for the sake of bizarre leftist propaganda, and not contributing anything promising in an era where social and economic stability are crumbling under the weight of PC. And the newspaper has the gall to sugarcoat the upcoming story premise.