Another Time, Another Place: Films to Take You From Self-Isolation

As the phrase goes,

‘it does what it says on the tin‘.

Here’s a personal selection of movies that can take you to another place and away from the possible crushing boredom of self-isolation. Btw, this doesn’t mean happy-clappy pablum, they’re pictures that work in transporting me to the wonderful world of moving pictures. I’m a big fan of the MCU, but have taken it upon myself to exclude their movies, as they are familiar to all readers.

Trailers rather than specific clips in most (but not all) instances, in an attempt to give readers an overall idea of each flick.

Two by Wes Anderson, both IMO sublime: THE LIFE AQUATIC WITH STEVE ZISSOU (2004):

OPEN RANGE (2003) — IMO a near perfect Western, directed by and starring Kevin Costner:

THE WITCHES OF EASTWICK (1987): Yeah, it’s silly and not really anything like the Updike novel (who cares), but it works for me. Watch out for the cherries:

THE EDGE (1997) — David Mamet supplies some cracking dialogue to this wilderness actioner, which was to be called THE BOOKWORM. All together now — what are we gonna do?

IN BRUGES (2008) — Belgium never looked lovelier — or more desolate. Superb score by Carter Burwell.
Fun(ish) Fact: I had a similar experience with North American tourists in a restaurant in Paris some years ago (see the scene below the trailer), without the overt physical violence, but, I must add, plenty of verbal aggro:

MURDER ON THE ORIENT EXPRESS (1974) — Sidney Lumet’s take on the Christie tale p*sses all over the recent Kenneth Branagh version, with its lousy green screen work (could they not have digitally inserted freezing breath in the exterior scenes?).

RIPLEY’ S GAME (2002) — to my mind Lilana (The Nightporter) Cavani’s the best adaptation so far, with some stunning Italian scenery and a frankly odd but very enjoyable interpretation of the Tom Ripley character by John Malkovich:

SLEEPY HOLLOW (1999) — I’m not a huge Tim Burton fan, but the look of the movie (shot in Leavesden in Buckinghamshire) is great and the cast is a terrific gallery of British thespian talent. And Depp/Ricci. And Casper Van Dien.

With an epilogue that rings all too true at this present time: 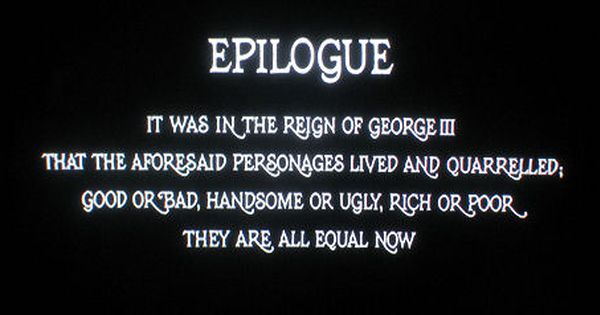 THE HOUND OF THE BASKERVILLES (1959) – Hammer’s take on the tale, directed by Terence Fisher and aided considerably by Jack Asher’s rich cinematography.

Peter Cushing is Holmes and André Morell (one of my all-time favourite actors) is a much smarter-than-usual Watson.

DUCK YOU SUCKER!/FISTFUL OF DYNAMITE/ONCE UPON A TIME IN THE REVOLUTION (1971) – Leone’s last Western and I think his finest.

Best-ever score to ANY movie by Ennio Morricone. IMO.

I don’t usually dig Rod Steiger, but he’s very good in this. As is James Coburn – naturally.

THE FEARLESS VAMPIRE KILLERS/DANCE OF THE VAMPIRES/PARDON ME, BUT YOUR TEETH ARE IN MY NECK (1967)

Polanski’s Sixties horror spoof looks like a Bruegel landscape brought to life, accompanied by a hypnotic score by Komeda (who also composed the music to Rosemary’s Baby).

This trailer was specially shot for the US, starring British music hall legend Max Wall:

Nobody Does it Better: Hube's Very Best of Bond (Plus a Few Non-Binary 007 Film Titles)
Barbara Broccoli Says the Next 007 Will Not Be Female
Henry Cavill Says He is Still 'Very Keen' to Join the 007 Franchise
Bond Writer Says a 'Sensitive' 007 Doesn't Work; Makes Him 'Slightly Gay'
Apple TV's 'Being James Bond' to Debut Ahead of 'No Time to Die'
Films and TV Series Every Casino Lover Should Watch
RIP: Darth Vader Actor David Prowse Dies at Age 85