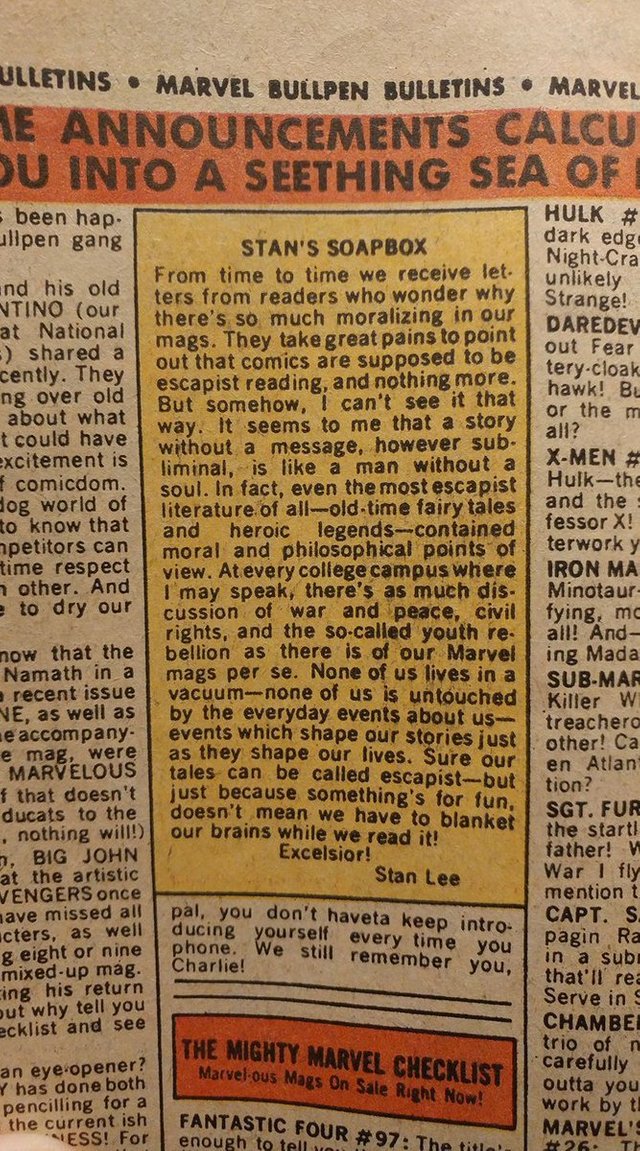 Over a month ago, the New Statesman wrote up their own attack on the Comicsgate campaign, using the rather cliched defense that “comic books were always bastions of liberalism”, without admitting that there was a time when leftists weren’t so extreme as to uphold evil ideologies and drown out all entertainment value. Starting with their exploitation of Stan Lee’s old op-eds:

Following news of his death, one of Lee’s old columns went viral. “Racism and bigotry are among the deadliest social ills plaguing the world today,” he wrote in a “Stan’s Soapbox” from December 1968. “But, unlike a team of costumed super-villains, they can’t be halted with a punch in the snoot or a zap from a ray gun. The only way to destroy them is to expose them – to reveal them for the insidious evil they really are.” The combination of high-mindedness and chummy slang (snoot!) was typical of a man with no allergy to corn. Lee lived long enough to make the same point in a video message last year: “Those stories have room for everyone, regardless of their race, gender or colour of their skin. The only things we don’t have room for are hate, intolerance and bigotry.”

And, as the writer of this junk makes clear with what’s to come, he considers all Comicsgate supporters to reflect all those negatives.

Shortly before Lee died, comic book artist Ethan Van Sciver announced he was stepping down as the de facto head of the movement known as Comicsgate; though he quickly changed his mind. According to Van Sciver, Comicsgate is “a consumer-led revolt against what is clearly a left-wing dominance in the comic book industry”. Instead, it advocates “escapist, apolitical entertainment”.

In reality, Comicsgaters use the standard harassment toolkit, including “doxxing” (publishing private information about an individual online) and orchestrated abuse, to bully creators, especially young women, who have the audacity to promote diversity and social awareness in superhero comic books. Scratch the surface of their concern for narrative consistency, and pure bigotry seeps out. In a clear echo of the video game equivalent, Gamergate, Comicsgate has earned the contempt of most comic book creators. “Stop being brownshirts,” wrote veteran artist Bill Sienkiewicz on Facebook. “Stop being goddamned ugly dicks.”

Yup, and we’re supposed to buy all these hoary cliches at face value. No mention of Mark Waid’s meddling with Richard Meyer’s contract at Antarctic Press, nor any of Elizabeth Breitweiser’s own problems with vile cybertrolls attacking her as much as her husband Mitch, all because they’re working on a crowdfunded project called Red Rooster. Nor any mention of the attacks on Alterna’s publisher because he doesn’t want to alienate customers of any stripe. Nor even that most of the creators are leftists who see such campaigns as representing “right-wing”, and are apparently so selfish and entitled, they want to drag the world down with them.

The Comicsgate argument is nonsense from root to branch. Reactionary James Bond fans can at least make the case that Ian Fleming intended his snobbish macho imperialist to be a white man for ever, but anyone decrying political content in modern comic books is suffering from acute cultural amnesia. As a Jewish child of the 1920s who hit his creative stride in the early 1960s, Stan Lee’s liberal inclinations aligned with the mood of the times. He shook up superhero comics by orienting them towards underdogs and outcasts, including Spider-Man, a working-class nerd, and the X-Men, whose stories used anti-mutant prejudice as a flexible metaphor for racism, anti-Semitism and homophobia. Even as a not particularly woke child in the 1980s, I got the message that you shouldn’t stigmatise anyone for being different, even if that person has blue skin and a forked tail. Bullies, bigots and fanatics were always on the wrong side.

Hmm, depending how you view this, Eugene “Flash” Thompson could prove otherwise. Why, so could the Sandman after he reformed in the mid-80s (and teamed with Silver Sable for a time). Or even the later Thunderbolts after several of the members there mostly went straight in the late 90s. When fictional villains reform, that throws a wrench into the works of these leftist propagandists who want to claim these classic creations as their domain only. Also, I’m not sure why a magazine that once caused a scandal with “kosher conspiracy” articles thinks they’re fit to speak about anti-semitism.

And isn’t that fascinating a UK writer’s willing to acknowledge there’s those who’d rather Fleming’s master spy should remain as he was created, but doesn’t seem to respect the same when dealing with US-based creations. All because they’re corporate-owned, I guess. And on Agent 007 again, there’s propagandists who believe his racial background should be changed, and even think he should be played by a transvestite! It’s also worth noting Lee defended keeping Peter Parker white and straight, and even the movie studio and Marvel themselves took this very position. Something I’m sure the New Statesman’s writer isn’t happy about, and he certainly didn’t mention it.

It’s true that superheroes sometimes behaved in ways that would trigger disciplinary proceedings at a left-leaning arts college. Nonetheless, progressive politics were baked in from the start. What are the X-Men if not Social Justice Warriors? And isn’t almost every superhero a virtue-signaller? Captain America was created by Joe Simon and Jack Kirby in 1941 for the express purpose of punching Nazis. Marvel’s brand of escapism was never politically neutral.

What, is that supposed to imply they took an approach considered…right wing? Because whenever Wolverine took lives of criminal vermin, that could be thought right-leaning in a way. And if he thinks the X-Men are SJWs, does that mean he believes they should campaign for censorship of the arts, and undermining women’s status by forcing them to accept male transsexuals into bathrooms reserved for the fairer sex, and sports like marathons, all at the expense of biological women’s dignity and scholarship awards? What kind of justice is that, if not something that only belittles and harms real women? Even lesbians and feminists have found themselves victimized as a result.

And if the writer is against negative depictions of Islam and its advocacy of jihadists, then I don’t see the point of stressing Marvel Comic’s escapist brand wasn’t neutral. Does he even know Captain America creator Joe Simon was actually right-wing?

Most of the foundational texts of geek culture were the product of this kind of mid-century liberalism. Star Trek was an ecumenical fantasy that produced the first interracial kiss in the history of American television. Alt-right opponents of The Last Jedi somehow failed to notice that George Lucas’s Empire was always thinly veiled fascism, which basically makes the Rebel Alliance antifa. The conservative backlash against the new “politically correct” Doctor Who ignores the fact that the Doctor is an ambassador for empathy whose first enemies were genocidal cyborg Nazis.

And isn’t that clever how he tries to hijack Star Wars for comparing the Jedi to a violent movement that contradicts its name perfectly? Nor is their any consideration for Doctor Who’s loss of audience ratings, because viewers now see the show as too PC for their tastes (a pregnant man shows up?!? Oh, that’s the cleverest thing I’ve heard all day. The 1989 TV series based on the Alien Nation film may have done that already anyway). As this op-ed on where the series is going notes, heavy-handed politics have been flooding virtually all aspects of entertainment lately at the expense of any entertainment value, and come to think of it, even educational value, which they decidedly lack.

This history matters because Comicsgaters and their fellow travelers want to rewrite it to imply that there was once a screw-your-feelings pre-PC Eden before people who weren’t straight white men came along and ruined pop culture. That fallacy is unwittingly mirrored by some young people on the left, who act as if diversity and social justice were recent inventions.

Well if you look at some of the early Silver Age DC books, that could imply a scenario where it wasn’t overtly political. How comes those never seem to count? And the writer fails to ponder that Lee himself took anti-communist positions in his old writings, before today’s social justice advocates ruined even that. During the Silver/Bronze Ages, Captain America fought commies, and Black Widow, as a dissident, also fought them at times. So too did Daredevil, whom Natasha Romanoff sometimes teamed up with in that era. But interesting he should mention leftists who, in a manner of speaking, invented the recent problems with social justice that resulted in more censorship not seen since Fredric Wertham pushed for it in the 50s. Also, I’d suggest some of the recent SJWs, contrary to what the writer’s implying, are white men, possibly male feminists, who’ve brought down the industry as we know it.

Frankly, it’s too easy to mock the kind of men who are stirred to rage by a cartoon called She-Ra and the Princesses of Power. But now that toxic fandom overlaps with white nationalism it is important to reassert the simple fact that it’s a culture war fought on a false prospectus. The apolitical past that the Comicsgaters long for never existed. As the rediscovered “Stan’s Soapbox” demonstrates, reactionary fans were always the bad guys, richly deserving a punch on the snoot. Perhaps this is why they are so furious about the characters that shaped their childhoods being “taken away” from them. They know that those characters were never really on their side.

And this is nothing more than a vilification of the core fan-bases, or anybody the writer disagrees with. Put another way, if you support conservative politics or even the anti-commie positions that Stan Lee himself supported, you’re not allowed to be a fan, and didn’t deserve those classic creations. In truth, what the jerk thinks is that these characters should never have been conceived in the first place. And he thinks no woman could ever be dismayed by the new take on She-Ra, not even the original voice actress, or that some of DC’s offerings weren’t apolitical in any regard, and worst, that any and all of the original Marvel fans were all filthy creatures who should be assaulted. Ugh, what a sad state of affairs have we.

I may not care for most of the mainstream superhero stories Van Sciver worked on, but I wonder if people like the NS propagandist ever read the X-Men and Green Lantern books he illustrated, and have since decided they regret it because of his politics. Well then, they’ve learned a big irony: even some of the creators themselves were never on their side. Why, they probably even think the same about Frank Miller, after he published Holy Terror several years ago.