Another Offensive Distortion and Justification of the Alan Scott’s Retcon 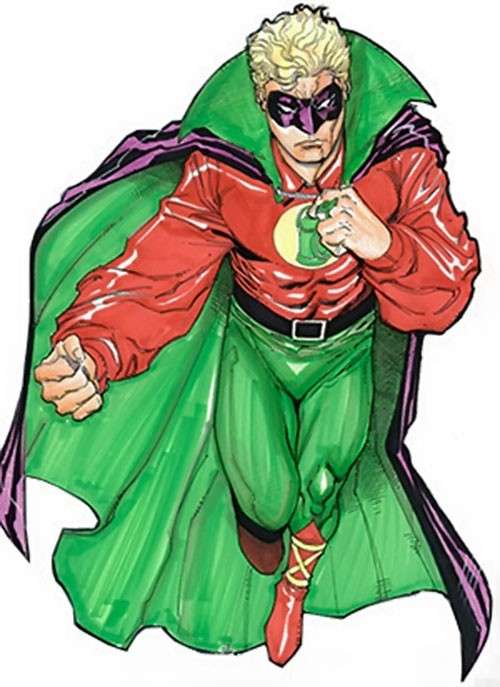 Arcamax published a shoddy column by Andrew Smith commenting on more TV adaptations of DC and Marvel material, and what he says about HBO’s new Green Lantern series is execrable:

Given the critical drubbing Ryan Reynolds’ “Green Lantern” received, one might think the property radioactive. One would be wrong.

HBO Max has placed an order for 10, one-hour episodes of “Green Lantern” the TV series. It’s expected to be a deluxe production like “Watchmen,” which means it might have a bigger budget than the movie!

It’s also got a murderer’s row of creators. Seth Grahame-Smith, who wrote “Abraham Lincoln: Vampire Hunter” (novel) and the “LEGO Batman Movie” (screenplay), is the showrunner. The Arrowverse’s Greg Berlanti is a producer, and co-writer of the first episode.

But Hal Jordan (the Ryan Reynolds Green Lantern) may be considered damaged goods, because he won’t be on the show. Nor will the two next-best-known Lanterns, John Stewart and Kyle Rayner. Instead the show will feature:

— Simon Baz, a Muslim who has good reason to distrust authority

— Jessica Cruz, a Latina with agoraphobia

— Guy Gardner, a hot head who thinks with his fists.

— Alan Scott, the first Green Lantern from the 1940s, who is gay

I’m not a big Gardner fan — there’s a fine line between being aggressive and being a bully, and not all writers find it — but Baz and Cruz are very welcome. And Scott should be fascinating, and not just because he’s gay.

Interesting how no objective criticism comes up about Hal being kicked to the curb and belittled yet again in this TV rendition, suggesting somebody’s playing along with the erroneous notion Hal is “damaged goods”. Despite that alleged assurance he’s not boosting this based on political correctness, he continues with the following, which is where he really takes a swerve into dishonesty:

Well, partly that. It’s only recently that DC wrote a new version of the character as gay, which has been extended to the original going back to his 1940 introduction. It actually works without too much squinting; the character had virtually no private life on the pages of his 1940s adventures, and the closest he had to a girlfriend was Harlequin (no, not that one), a woman named Molly Mayne who committed crimes with clown gimmicks to attract Green Lantern’s (romantic) attention. Which, no surprise, didn’t work.

So, sure, it makes sense he’s gay. And all the more interesting, given how he had to stay in the closet through one of the most macho periods in American history. His oblique comments in current comics still reflect his almost reflexive sense of privacy.

But aside from that, what gives comics fans the tingles is that Scott isn’t connected to the other Green Lanterns. Hal Jordan and his ilk get their super-scientific rings from the Guardians of Oa, but Scott’s ring is magic, carved from a talking meteor. So how they plan to connect Scott to the other Lanterns has comics fans on tenterhooks.

Yes, we are weird. 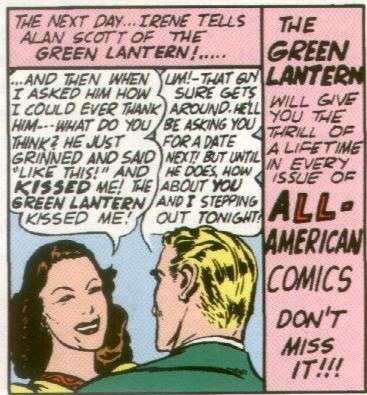 Correction: some MSM reporters are very weird, and all for a bad cause. He completely omits the Apex Broadcasting secretary Irene Miller, who’d been a co-star for nearly 4 years in GL’s All-American Comics installment, and during the time she was there, she and Alan did have an affair. I’ve guessed the reason she was phased out was because the writers felt it was becoming too similar to Clark Kent and Lois Lane’s relationship, so they shifted instead to a buddy partnership between Alan and cab driver Doiby Dickles. Even then, there were clear signs that Alan was characterized as heterosexual, as he became chummy with another woman or two within that time, and after another 3 years, that’s when it was decided to add another recurring female co-star again, this time more of an anti-heroine a la Catwoman, in the form of Molly Mayne as Harlequin, who, after at least a year’s appearances, was revealed as a government agent who was helping them trap criminals with her own gimmicks, and signs were showing that Alan and Molly were developing feelings for each other, which would be followed up on in later years when they married, having finally learned each other’s secret identities. So, what’s all this shameless distortion about Alan not having a private life of any kind?

Just as blatant about this column is how it omits Scott’s brief relation with Rose Canton, the former Golden Age villainess known as Thorn, mother of Alan’s 2 children, Jade and Obsidian, who premiered in 1983 and went on to become notable members of Infinity Inc, some of which is mentioned in the following panels: 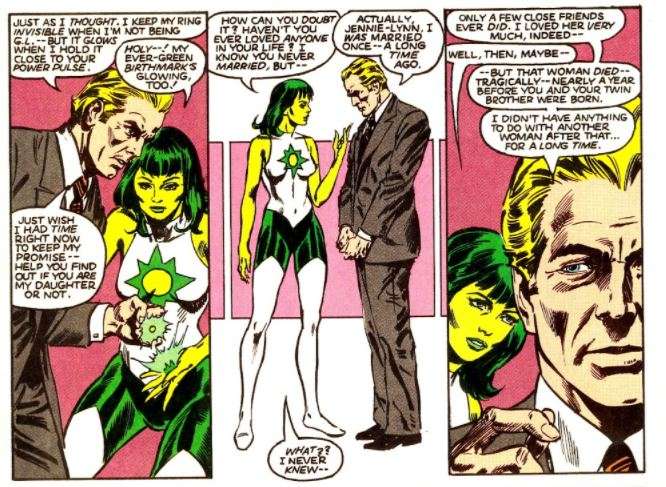 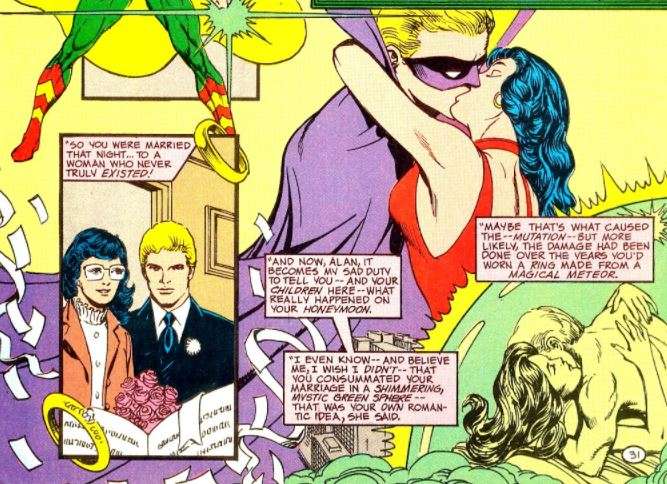 And despite any modern claims to the contrary, when Obsidian debuted, he was far from being depicted as homosexual, something which was only first brought about around 1994, possibly by Dan Jurgens during the Justice League titles of the time, making Todd Rice an early victim of “woke” hijacking. Whatever John Byrne originally had planned for Northstar in Alpha Flight was not the same thing when it came to how Roy Thomas created his characters (and he once made clear he was hugely disappointed by James Robinson’s retcon to Alan), yet somebody at DC had the big idea to mimic Marvel almost to the letter, and it led nowhere but virtue-signaling. Though easily worse was the time when Obsidian was depicted murdering his stepfather and going insane in the pages of JSA, and it makes little difference whether it was due to the influence of a supervillain.
I don’t know if the New52 retcon to Alan in that Earth-2 series that sputtered out after almost 3 years is still being used, though I do know that, if it is, DC’s only proving they don’t have the ability to abandon a failed direction any more than Marvel’s with Iceman. And it’s shameful how Smith channels the liberal PC direction that it “makes sense” that a fictional character would be gay, despite it being clear his creators, Martin Nodell and Bill Finger, obviously never intended to characterize him as such (and simple writing approaches centered mainly on action don’t automatically “prove” the PC visions of SJWs are correct). Just as it’s atrocious that the TV producers have decided to opportunistically make use of Geoff Johns’ Islamist creation, who was built on leftist propaganda, and of course, they’ll never acknowledge the Islamic religion’s hostility to homosexuality, no matter how much it ends up contradicting their advocacy.
It’s hugely disappointing how the GL franchise has been devastated by political correctness dating back as far as 3 decades, and it got worse as it all went along. Now, it’s all compounded by a TV show coming from producers with nothing but contempt for family values, and backed by disrespectful news writers. A terrible shame it’s come to this. As a GL fan, I will most definitely not be tuning in to this TV show, because I care about the classic characters and won’t support a vision belittling them.
Originally published here.