Yesterday I pondered if the classic 45-year-old film “Rollerball” is an apt scenario which the US may face in the very near future. This time we investigate “They Live,” John Carpenter’s cult favorite about an alien race which clandestinely has been priming Earth for a corporate-style takeover for decades.

The story centers around George Nada (or just “Nada” in the film credits), a drifter looking for work played by former wrestling star Roddy Piper. In Los Angeles he finds some, and ends up living (for the duration) in an organized homeless camp just outside the city.

Eventually Nada becomes suspicious of the goings-on at an adjacent church. He investigates, and discovers the “singing” he’s been hearing is actually just a recording, and also happens upon a cardboard box full of Ray-Ban-style sunglasses. A short time later, the church is subjected to a violent police raid, and while picking through the aftermath Nada rediscovers the (unscathed) box of eyewear.

To his utter shock, upon putting on the sunglasses Nada sees countless subliminal messages advertised throughout the city. Billboards actually state things like “OBEY,” “MARRY AND REPRODUCE” and “SLEEP,” and a dollar bill even reads “THIS IS YOUR GOD.”

Worse, a certain percentage of people now look appear as skeleton-like figures with very bad skin and bulbous eyes. One of these confronts Nada at a newsstand, asking him “What’s your problem?” presumably in response to Nada’s jaw-gaping expression

Perhaps the most memorable scene is when Nada looks up at a television while in a supermarket and sees an (alien) political candidate promising that our “best days are ahead.” Nada says to himself “It figures it’d be something like this!”

Eventually Nada and his pal Frank (played by “The Thing’s” Keith David) discover that the aliens have been on Earth for quite a long time, and are exploiting it as “their Third World.” Worse, they’ve paid off myriad humans, including powerful politicians, natch, to assist them as the “human power elite.” 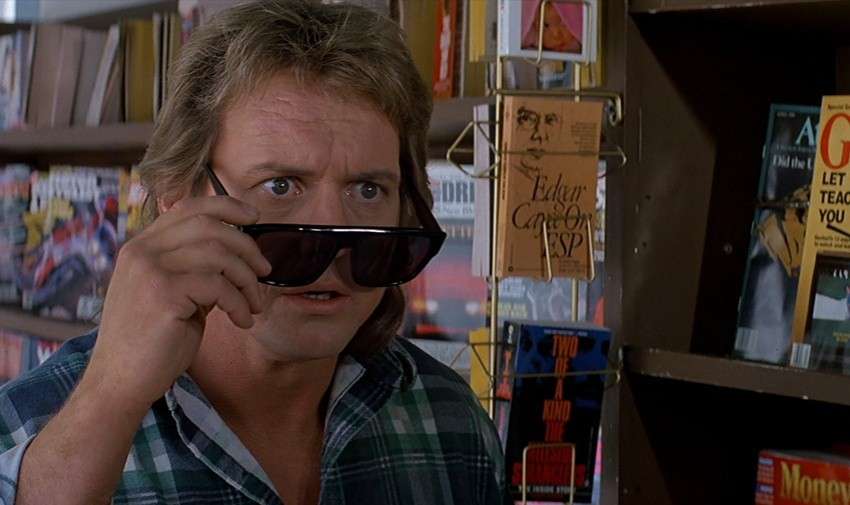 Ironically, director Carpenter made the film due to his “growing distaste with the ever-increasing commercialization of 1980s popular culture and politics, particularly the influence of Reaganomics“:

The picture’s premise is that the ‘Reagan Revolution’ is run by aliens from another galaxy. Free enterprisers from outer space have taken over the world, and are exploiting Earth as if it’s a third world planet. As soon as they exhaust all our resources, they’ll move on to another world… I began watching TV again. I quickly realized that everything we see is designed to sell us something…. It’s all about wanting us to buy something. The only thing they want to do is take our money.

Of course, television and other entertainment had been selling us stuff long before Ronald Reagan became president, and ditto  the First World taking advantage of the Third World. 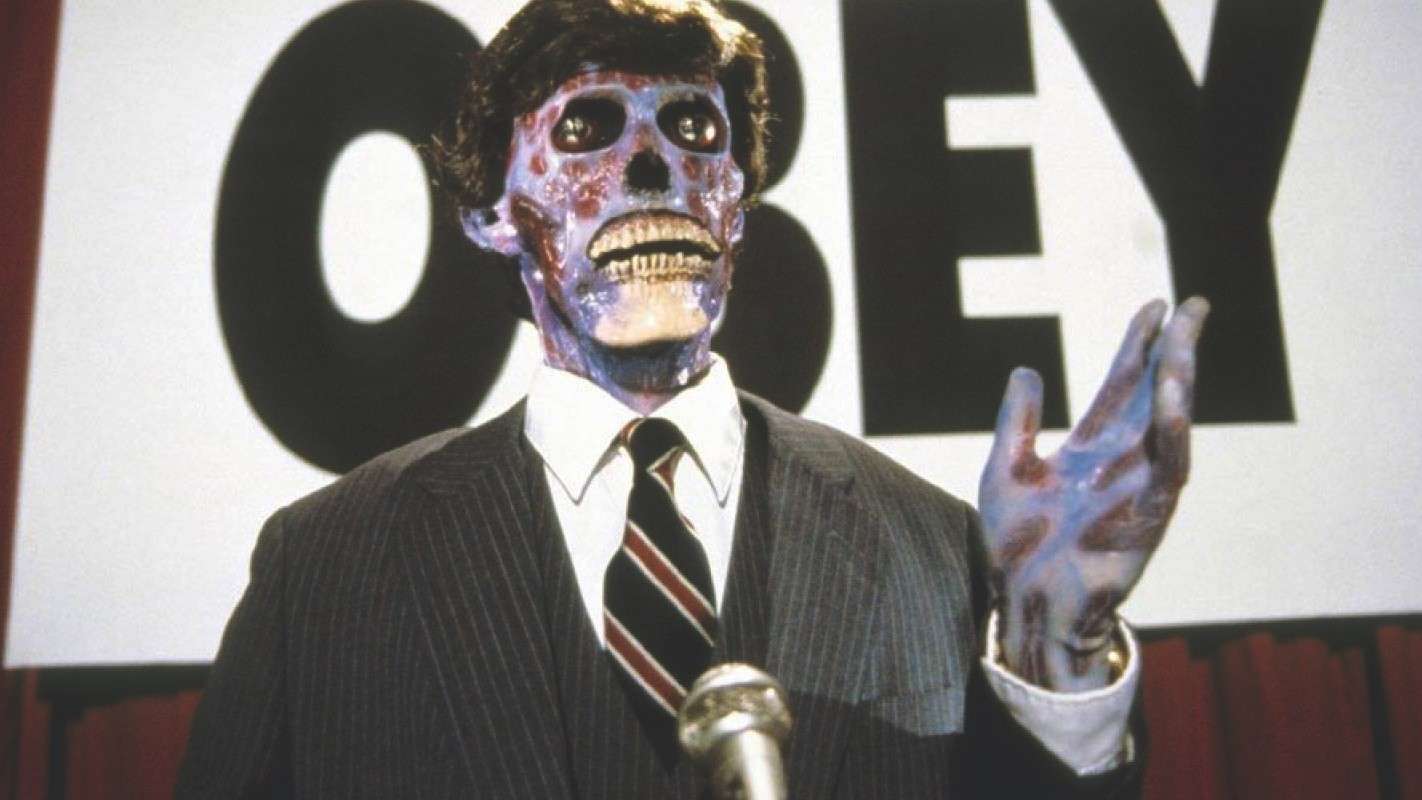 Social media was about 20 years away when the film came out, and a dozen years after that it’s reasonable to conclude many could not have imagined how powerful it would become. As with the mega-powerful corporation bigwigs in “Rollerball,” the “They Live” aliens control what people see and read, allowing only “acceptable” versions of news and history.

Facebook, Twitter and Google haven’t yet made use of the subliminal messaging like that in “They Live” (as far as we know!), but they are in the business of guiding how you think. Their algorithms filter out “badthink,” special “notices” get slapped on various tweets and posts, and censorship “mistakes” get apologized for long after the fact, and only if there’s enough pressure applied. (It’s weird how those mistakes always go in one direction: to the right.)

Like the aliens in the film who referred to humans aware of their infiltration as “terrorists,” the modern media similarly frames groups to suit an agenda, usually progressive. The violence that took place across American cities this summer and fall, led by the radical Antifa and to a lesser extent Black Lives Matter, was routinely portrayed as “instigated” by right-wing militia types, and even President Trump himself. Networks remarkably went out of their way to show that the percentage of such “protests” — approximately 93 — were “peaceful”; never mind that the remaining seven percent decimated whole parts of large metropolises.

Most recently, any talk about voter fraud, a “stolen” election, or anything that casts the slightest doubt on Joe Biden’s victory is either labeled or censored. Three-to-four years ago on the other hand, talk of Trump colluding with Russia was all over the social media and mainstream media headlines. 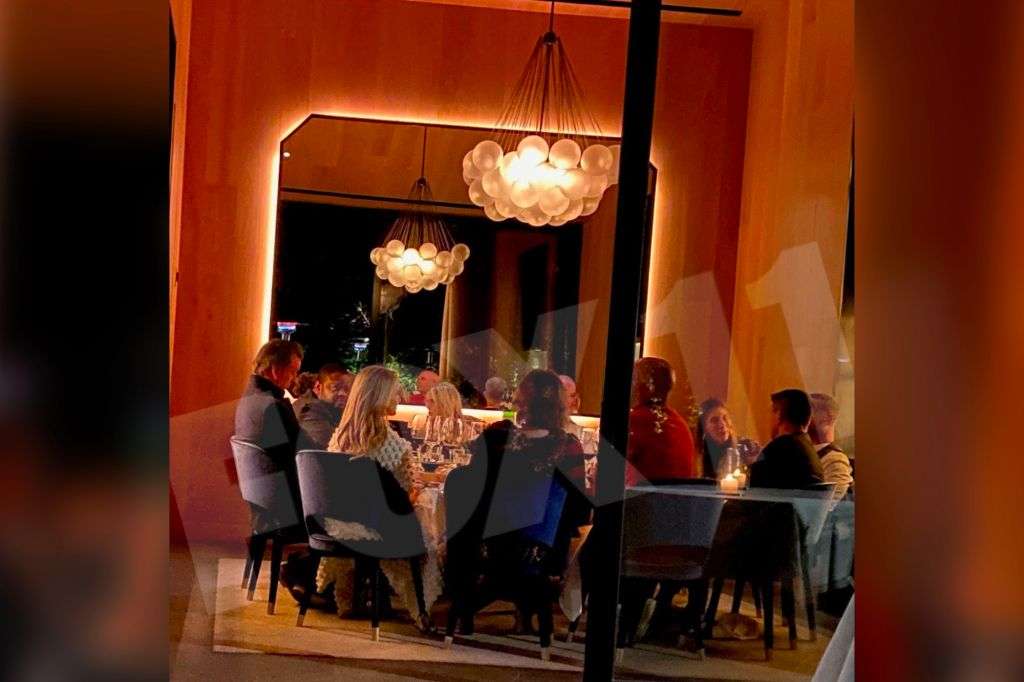 With the coming of the COVID-19 pandemic, the “human power elite” is exemplified by leaders such as California’s Gavin Newsom (see above), New York’s Andrew Cuomo and Michigan’s Gretchen Whitmer. While your average “non-essential” American worker — like George Nada — lives paycheck-to-paycheck and hopes their income source continues unabated, officials like these three a**holes are caught violating their own edicts … followed by the flimsiest of excuses for their behavior.

Those in the mainstream media are no better. For example, Andrew Cuomo’s brother, CNN talking head Chris Cuomo, also rants constantly about those allegedly not taking COVID seriously, yet has been caught numerous times in public without a mask.

So what do you think? Is “Rollerball” or “They Live” more fitting for our present circumstances?