Amazon is Killing the ‘Golden Goose’

Author David Stewart recently produced an excellent video on recent shenanigans in the eBook market. Based on rumblings he’s heard from readers and other authors, David sees an eBook market contraction on the way. As usual, he’s done his homework, and I think he’s on to something.

The first question to ask is whether or not indie eBook sales are falling. The establishment press has been playing Chicken Little with eBook sales figures for years, & it’s always been wishful thinking based on declines in oldpub eBook sales.

Besides the usual run of oldpub-affiliated rags singing “Ding Dong, the Witch Is Dead” based on oldpub’s own plummeting sales, the only article I could find specifically saying that indie eBook sales are declining was an unsourced author blog post. 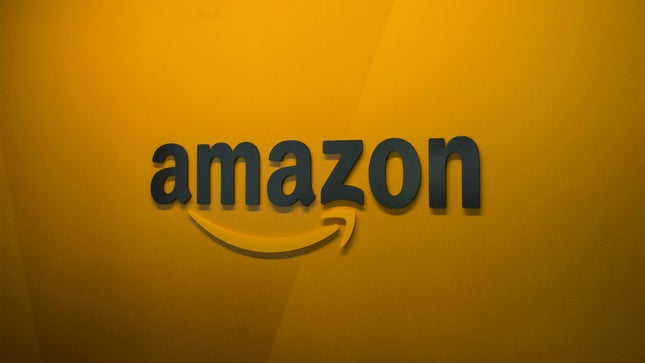 To be fair to the guy, the reason his post is unsourced is because he got his data from Author Earning’s last quarterly report, & AE has since shut down. Here’s what he had to say:

Sales of self-published ebooks, in particular, have dropped suddenly and alarmingly.

After years of steady growth, e-book sales for indie authors have started to hit a problem.

The most recent data from Author Earnings in their latest quarterly report gives ample proof of the drop off in self-publishing sales and earnings.

While the data is clear, the reason or reasons why the number of books sold by indie authors has fallen so quickly is definitely not so clear.

The long list of comments attached to the Author Earnings report gives rise to many possible scenarios.

But as the report and some commenters mention, the most likely causes are a change in algorithms by Amazon.

It could be a glitch in the Kindle Unlimited pay-per-page read program. Or a sudden change of marketing emphasis by Amazon.

There is also the possibility that Bookbub has added to the problem by accepting fewer self-published books to promote.

So, David’s premise that eBook sales are down across the board might be true, or it might be more legacy journalist shilling for oldpub.

I think David is right. There have been too many warning signs to be coincidences. including Castalia House returning many of their authors’ rights.

A lot of talented indie authors who’ve been hustling for years are having trouble breaking through to the next level.

In partial agreement with the article above, the most likely culprits are unscrupulous indie authors churning out shovelware to chase orange tags/game the algorithm and Amazon enabling those practices while monkeying with the algo.

If you listen to the readers--which, if you’re an author, you should--they’re becoming increasingly frustrated with Amazon’s inability to connect them with books they enjoy.

Another likely culprit is Kindle Unlimited. Not only does it not pay as well as book sales, it’s gaining an unsavory reputation as a dumping ground where lazy authors offload sub-par books. Imagine digging through the bargain movie bin at Wal-Mart at 3 AM, and it’s full of direct-to-video Asylum Films DVDS.

David drew an analogy to the video game crash of ’83. That’s a useful model, but the last sales data I saw from AE reminded me of something else. 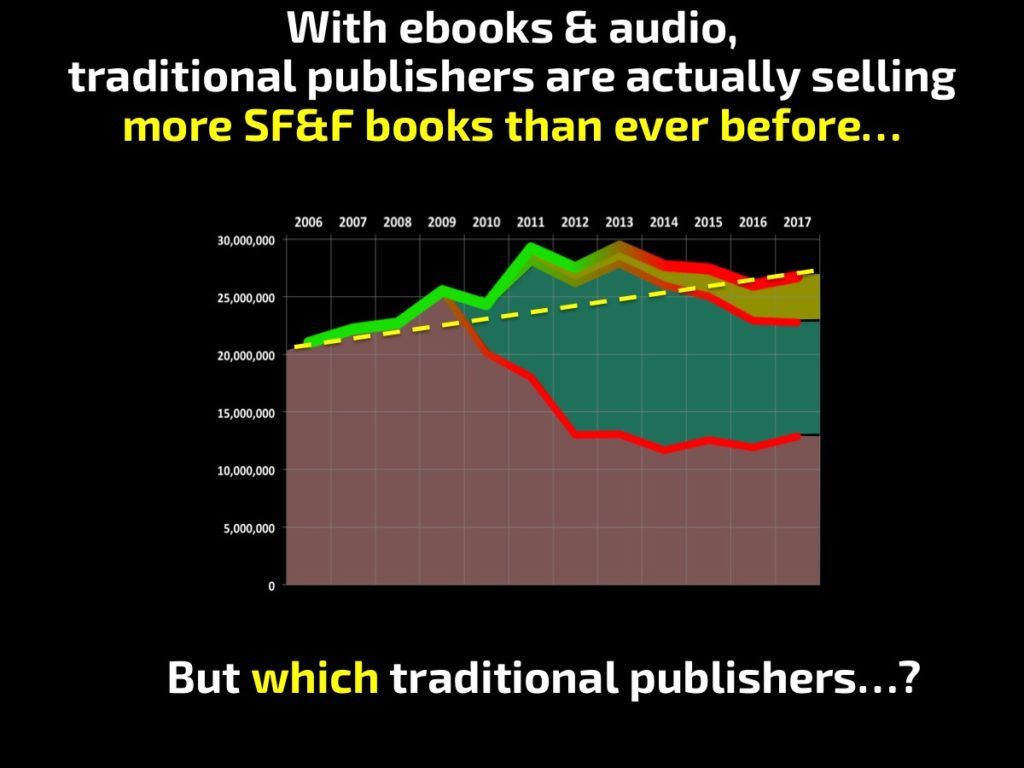 Note the repeating pattern of a sales dip that’s compensated for when a new medium rises to prominence. Print SFF fell off a cliff, then eBooks buoyed the market up. When eBooks started to slide, along came audio to give SFF sales a shot in the arm.

But--and this is the key point to consider--neither print nor eBooks fully regained their previous market share.

That pattern doesn’t say “video games” to me. It says something more like this: 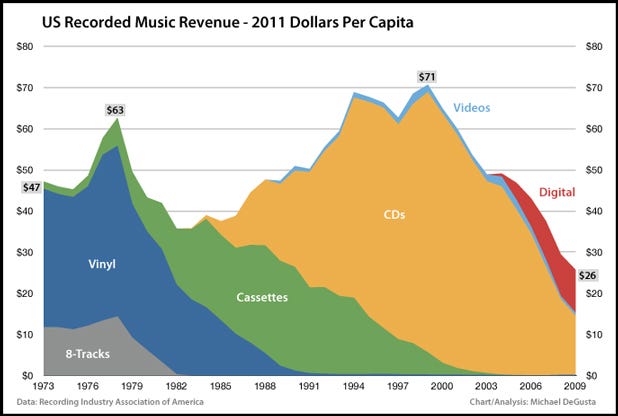 Look at the fluctuations in the music industry over the past 4 decades. Record sales actually peaked in the late 70s. The introduction of cassettes briefly bolstered the market, only to drop off fairly rapidly. The same phenomenon repeated itself with CDs, videos, and digital.

The music industry model, even more than the vidya crash, was a content problem. Rock & Roll peaked in the late 70s. Hip Hop started rising to dominance after that, but it’s never appealed to most Americans. The record labels shot themselves in the foot by trying to push niche music genres the general public didn’t want. See also when they unilaterally decided to kill hair metal in favor of grunge.

Those spikes in record sales weren’t due to new music taking off. They were people buying Led Zeppelin IV again on tape, CD, & digital.

The same problem killed oldpub. Both they & the record labels tried to force the public to consume content they simply didn’t want. As with the music industry, oldpub’s major source of income is now re-releases of old classics.

The crie de coeur of Amazon readers is, “I can’t find what I want. There’s too much gray goo, & Amazon never recommends books I like anymore.” Chalk it up to authors’ greed and Amazon’s negligence.

An epidemic of orange tag fever has shortsighted authors drastically miscategorizing their books so they can get into categories with less competition and rank hard. Romance authors are the worst offenders, and everybody’s known it for years.

But Amazon is doing nothing to correct his abuse. In fact, they’re exacerbating the problem with their recent algorithm change, which gives maximum visibility to new material. That change has pushed authors to churn out books as fast as possible. I still maintain that it’s possible to write well and fast. In fact, speed increases with mastery. But too many authors can’t be bothered to master their craft and are instead spraying raw sewage from a high-pressure nozzle into Amazon’s lake.

The fact that the world’s 3rd biggest search engine now can’t recommend a book you like supports David’s thesis that Amazon doesn’t care about books anymore. They could solve the search problem overnight by making romance authors stay in their lane. Instead they’re killing the golden goose.

AE reportedly traced the sudden drop in newpub eBook sales to April 2019. It’s a good bet that’s when Amazon went all in on calibrating the A9 for rapid release.

Of course, Amazon is just one branch of a larger system. Check this out: 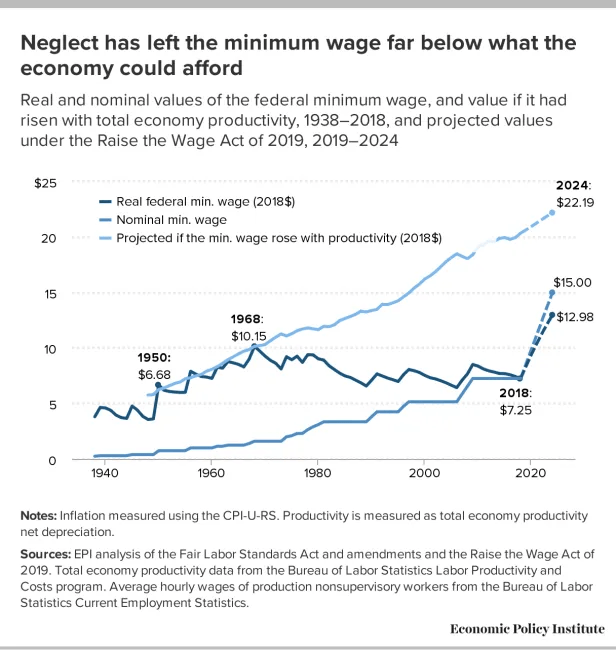 The disparity between productivity and earnings is higher than it’s been in decades. In short, everyone’s working harder for less money. Working in the historically recession-resistant entertainment industry afforded authors a reprieve, but they’re starting to feel the pinch.

This is why I don’t think a Nintendo style benevolent monopoly will save us.

Long-term economic conditions are looking more like 1485 than 1985. What we’re seeing is the concentration of nearly all wealth & property in the hands of a few merchant princes & de facto guilds with effective royal charters granting them monopolies.

That’s also why the feds have been slow to put out the student debt fire. Without periodic debt jubilees, the banks eventually end up owning everything. And they want to own everything.

But even robber barons want to read fun adventure stories. That’s why I’m still bullish on a neo-patronage model emerging in the long run.

In the short term, remember that Amazon is still a huge market with about a billion dollars’ worth of annual book sales alone. Artists have been able to thrive even in the worst of times, which these hardly are.

Get good. Produce professional books people want to read. Low overhead and direct QA were the weapons newpub used to beat oldpub, and they’ll help you beat lazy indie competitors, too. Ship quality, and undersell them.

For the mid-term, redouble your efforts to build your author brand outside Amazon. Blogs are back. Dedicate yourself to posting something each weekday. Invest in a slick author web site, and set up your own store where you can sell directly to readers for even less than on Amazon.

And as always, don’t give money to people who hate you. Don’t reward gray goo. Support authors who make the effort to hone their craft for your entertainment!

UPDATE: I must issue a correction on one point. Superversive Press did not close due to the factors discussed in this post. The publisher made the decision to close up shop for purely personal reasons.