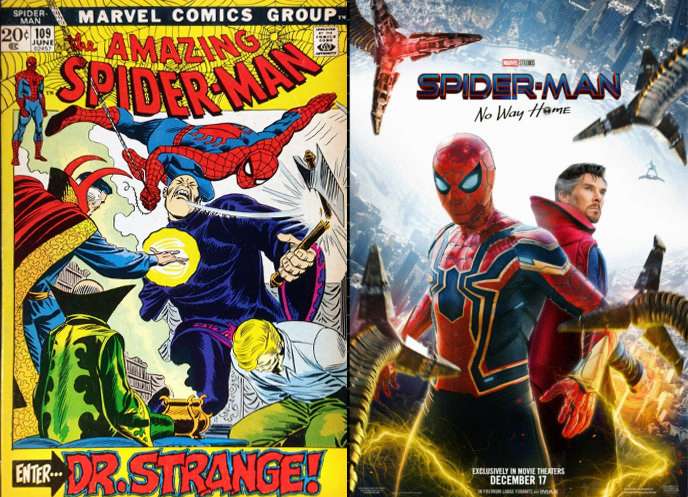 Here’s a superficial article at the Baylor Lariat supposedly focusing on why superhero movies are popular, without looking at the dire state of affairs comicdom’s suffered from artistically:

Dr. Greg Garrett, professor of English, said he believes comic book movies are so popular because they wrestle with humanity’s biggest issues.

“What does it mean to be heroic, to sacrifice for a cause bigger than ourselves?” Garrett said. “What does evil look like, and how do we stand against it? How do we bring justice to a world full of injustice?”

The problem is that, if you don’t address real life issues convincingly, how can you expect comics or the movies based on them to be any better? For as much as 2 decades already, and likely more, there’s only so many valid subjects comics creators have come to vehemently refuse to touch, even on a metaphorical level, and instead have taken to far-left assaults on conservatives, for all the wrong reasons. It could therefore be asked whether the professor knows what evil looks like, and how to stand against it. And, how we realize justice. Does he know any serious answers in that regard?

But chances they’d do a convincing commentary, even metaphorical, on how bad the situation has become under Joe Biden, are next to zero. By contrast, chances are the filmmakers overseeing the adaptations would be willing to critique the Trump administration far more. And they cite an item that could come close:

“’Suicide Squad’ or ‘Falcon and the Winter Soldier’ ask tough questions about the way things are and why things cannot be different,” Garrett said.

And this could be telling, based on the troubling political metaphors in Falcon & the Winter Soldier’s TV show. If that’s what the guy considers worthwhile stuff, it’s pretty apparent he’s not serious about arguing how movie adaptations, let alone the comics themselves, could improve their perspectives, politically or otherwise.

Houston sophomore DJ Scott said he thinks the rise in comic book movies’ popularity is a result of appealing to people’s imaginations.

“Superhero movies in particular have always appealed to people because everyone at some point has had dreams of being a superhero and having superpowers,” Scott said.

But do filmmakers actually do a good job conveying power fantasies and adventure wish fulfilment these days? Or, do they think it’s more important to inject divisive ideologies, as seen in the Eternals film? Again, no actually discussion to be found in this college puff piece.

Scott attributes the superhero craze to the now mainstream culture of sci-fi and fantasy as well as new crossover feature films.

Looking toward the future, Scott said he hopes the genre evolves into releasing more unique movies, with each movie having its own tone and style.

Unfortunately, if political correctness takes precedence, they won’t have much a tone or style at all. And this isn’t particularly clear on when science fantasy became mainstream, which as most experts would probably argue, was as far back as the mid-70s, when Star Wars really gave it all a big jolt that sent the genre racing ahead for many years. Yet where’s it all gotten us to in the end? A lot of movies where special effects now seem more prominent, and less so the importance of acting talent. Or, oddly enough, where recognizability of performers has been largely eliminated and they’re selling based on brands instead. Is it any wonder we’re now saddled with pretentious Hollywooders like Brie Larson? Most earlier comics movies, whatever their quality, weren’t usually marketed the same way they are now, where political correctness has taken far more precedence over how they’re crafted.

So, too bad these would-be scholars have chosen to go the superficial route, but hardly a surprise coming from such university-based sources.