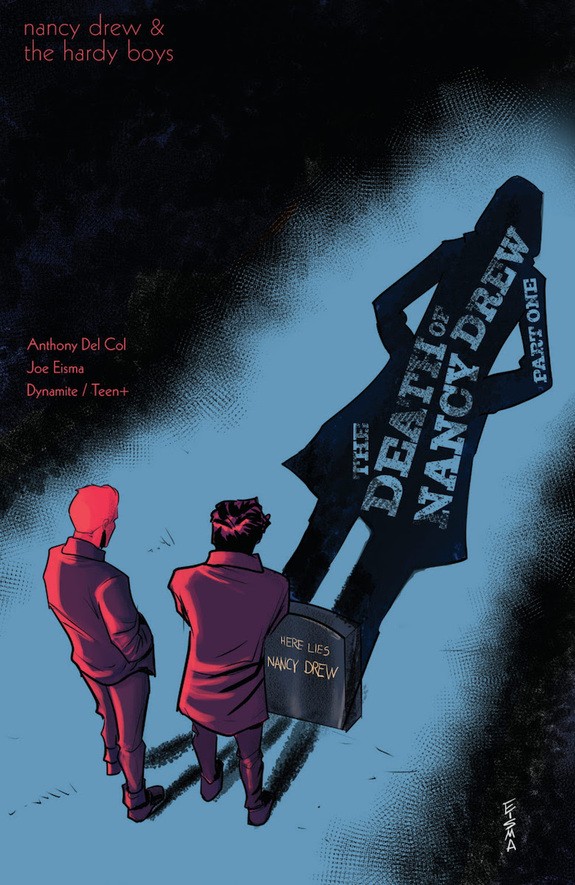 Dynamite’s been licensing the two most durable of the erstwhile Stratameyer Syndicate’s creations for some time now, the Hardy Boys and Nancy Drew (today owned by Simon & Schuster). And they chose to celebrate the latter’s 90th year with the following:

Nancy Drew is dead! Or so it seems, as to celebrate her 90th anniversary the famous literary character’s mysterious fate is investigated in a new monthly comic series published by Dynamite starting in April. Help solve the case in Nancy Drew & the Hardy Boys: The Death of Nancy Drew!

Now I of course I don’t think they actually terminated the famous girl sleuth; they do say it may only seem that way. But the way they’re promoting this isn’t all that different from cynical attention-grabbers Marvel and DC became notorious for. Polygon commented that:

Despite the characters’ long history as friends and collaborators, killing off a female character and handing her job to two young men isn’t a great look. And hey, even if a quick plot twist reveals that Nancy’s death was all a fakeout, it sure doesn’t seem like the best way to publicize your Nancy Drew anniversary story. Especially given how strongly Nancy Drew has resonated with young women for nearly a century. Heck, in the introduction to the Nancy Drew Wikipedia page she’s cited as an inspiration for women like Sandra Day O’Connor and Hillary Rodham Clinton.

Before I say what I have to about Dynamite’s direction with ND, I’m going to have to note Clinton’s not an inspiration by contrast, given how she handled a child rape case in 1975. On which note, what’s the use of citing Wikipedia for all this, seeing as anybody can edit millions of different pages there without having to register? And let’s not forget the Clintons’ connections with Jeffrey Epstein. That doesn’t sound to me like somebody inspired by Nancy Drew at all, but I digress. 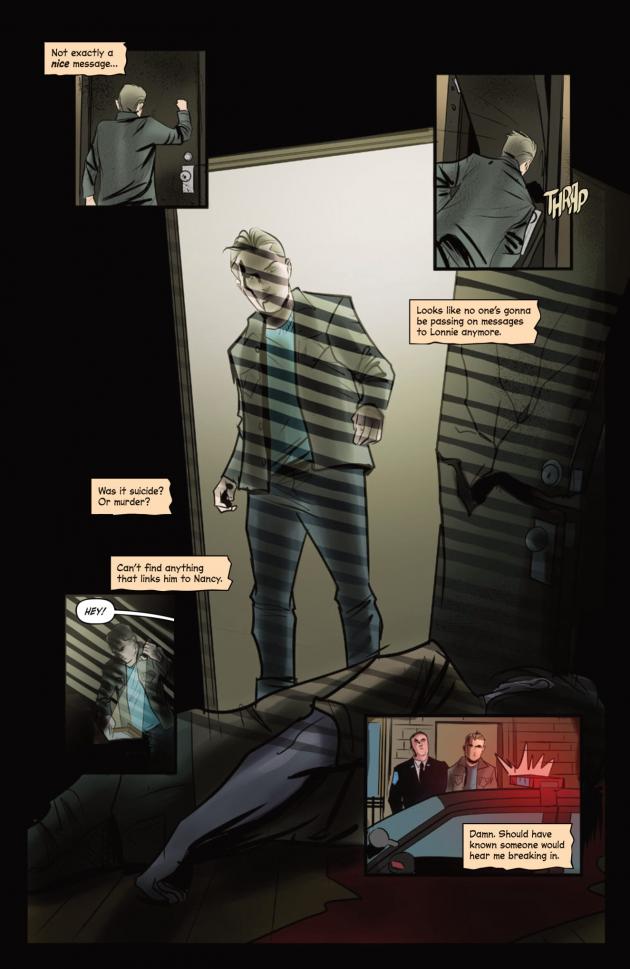 While Polygon’s goofed again with the politics, they do have a point that publicizing a story based on the ostensible death of a famous character isn’t a good way to promote a book, and in comicdom, it’s long become an offensive cliche, and an open signal the creators lack faith in their ability to promote the story as plain entertainment, or they’re so desperate for attention at all costs. It wasn’t acceptable when it was done with Wolverine either, and this is another addition of insult to injury.

It’s disappointing to see what appears to be another cherished character getting fridged in service of a man’s (or in this, case, two teen boys’) story, but here’s hoping Nancy has more control over her destiny that it appears at first blush. And that we get to see her use her iconic magnifying glass at least once.

How about better yet, if it does turn out she faked her demise? They’re right the setup is a slap in the face to anybody who ever enjoyed ND and HB, but if they do find the premise repellent, how disappointing it is they don’t ask for a boycott of the book regardless, which might send a message this isn’t what appeals to anybody. In fact, why must the HB take up the case? Wouldn’t it at least have been more clever to have some of the notable co-stars from ND like Bess Marvin, Georgia Fayne and Ned Nickerson do the investigating rather than Frank and Joe Hardy? 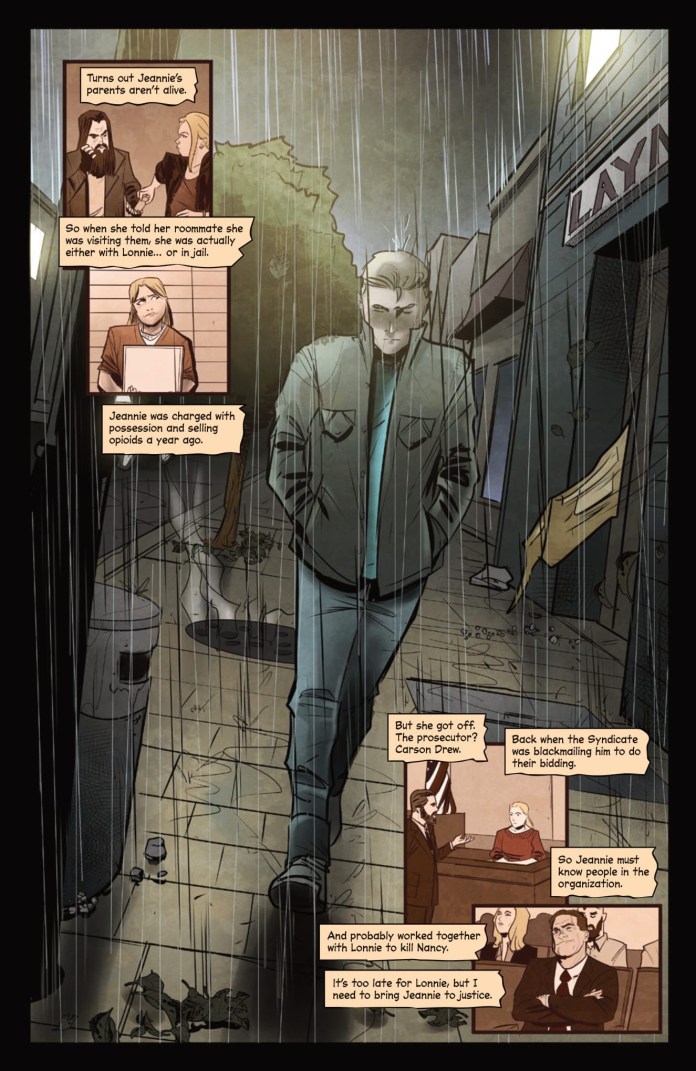 And it’s not even the first time Dynamite’s screwed up in their ND adaptations. Here’s a review of a series they launched at least 2 years ago where it’s indicated diversity-inclusion was put ahead of trying to conceive a compelling story:

If you’re familiar with writer Kelly Thompson, then you probably know about what to expect here. Her work on IDW’s Jem and the Holograms and Marvel’s Kate Bishop led Hawkeye storyline, among others, have left a lot of fans a little bitter about some of their favorite characters getting watered down or even fundamentally changed in order to serve someone’s obvious social ideology. Unfortunately, Dynamite’s Nancy Drew falls into the same category as those others as we get a lot of unnecessary “updating” while getting almost no story to get excited about.

That is, without a doubt, the most egregious error that this first issue makes. Nancy Drew has always been about her ability to solve a good mystery, but we get almost zero insight into what the heck the mystery is supposed to be. We get a look at Nancy’s new potty mouth, some lesbians making out in a car, and a good sampling of nearly every nationality known to man, but what we don’t get is a compelling mystery. We’re told that there is a mystery, but we have no idea what it is and we’re not given any real reason to care. Things like up-to-date reboots and a diverse cast of characters is all well and good, but when story takes a backseat to these things, it can leave one a little bitter.

This review of the 2nd issue isn’t much better, and the artwork is just a lot of frustration. So this is what they brought anything Stratameyer-created down to? How sad. In that case, why must we expect any better from an obvious publicity stunt that only adds injury to insult? At worst, it sounds like they’re following the same formula Marvel recently used for Carol Danvers, seemingly turning her evil for publicity’s sake.

If this is all Dynamite can think of doing with the Hardy Boys and Nancy Drew, they should lose the license, but who knows if a succeeding publisher that’d adapt the characters would do any better in an age obsessed with social justice propaganda?