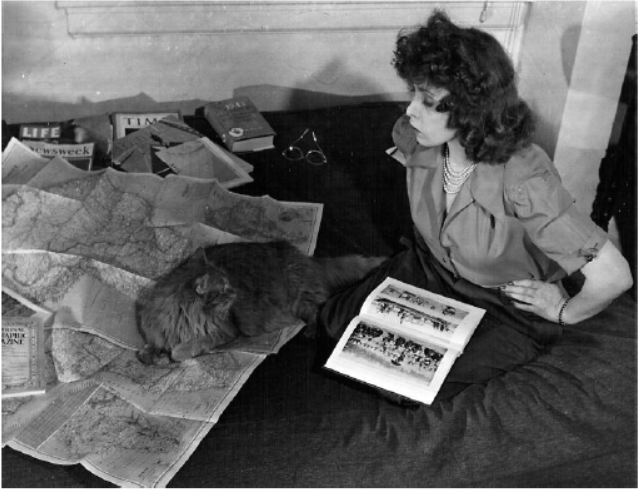 This is a very big deal and should be celebrated, but the comics press doesn’t seem interested in following up on history items like these. If anybody’s wondering who the earliest women in comics writing/illustrating are, the Australian website of The Conversation has some history about Tarpé Mills and her creation of Miss Fury, an early lady crimefighter who wore a catsuit almost like Catwoman’s in the Batman lore, which first ran as a newspaper strip for about a decade:

In April 1941, just a few short years after Superman came swooping out of the Manhattan skies, Miss Fury – originally known as Black Fury – became the first major female superhero to go to print. She beat Charles Moulton Marsden’s Wonder Woman to the page by more than six months. More significantly, Miss Fury was the first female superhero to be written and drawn by a woman, Tarpé Mills.

Miss Fury’s creator – whose real name was June – shared much of the gritty ingenuity of her superheroine. Like other female artists of the Golden Age, Mills was obliged to make her name in comics by disguising her gender. As she later told the New York Post, “It would have been a major let-down to the kids if they found out that the author of such virile and awesome characters was a gal.”

Yet, this trailblazing illustrator, squeezed out of the comic world amid a post-WW2 backlash against unconventional images of femininity and a 1950s climate of heightened censorship, has been largely excluded from the pantheon of comic greats – until now. 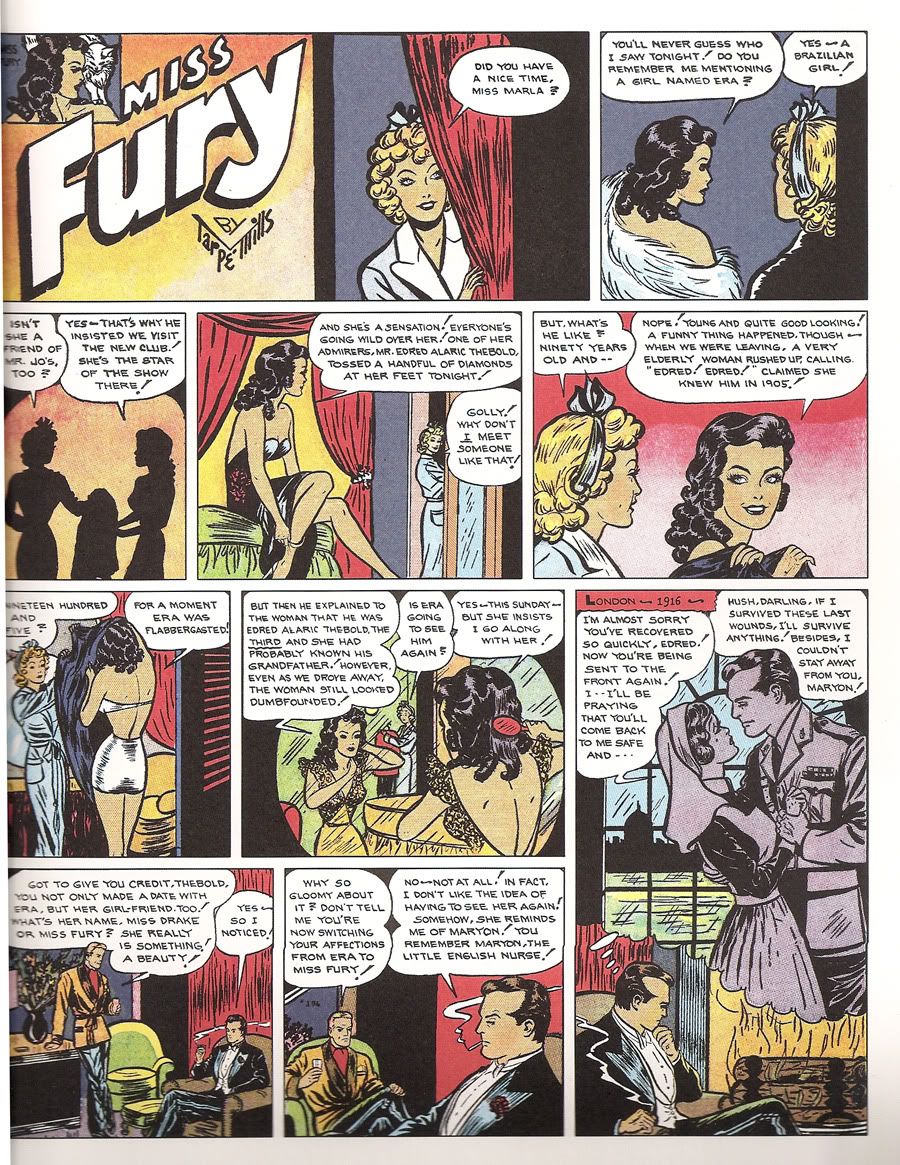 Here’s something to ponder: she’s still excluded, by practically the same kind of crowd that led to all that censorship in the first place. What they cite could easily echo today’s new left-wing puritanical environment with its negativity to sex. And it wouldn’t make much difference if the artist was a woman; even that’s considered an affront to the twisted viewpoints they have about sexuality. Was Mills right though, about the risk of rejection if it were known a woman had created Miss Fury? An excellent question, much in the same way Jack Kirby was worried if anybody knew the co-creator of Captain America was a Jew named Jacob Kurtzberg. But, I think it can be assured that a lot’s changed long since, save for among the social justice crowd who’ve worked round the clock to destroy all that made Steve Rogers a fine creation. Now, here’s what they say about the censorship problems that arose in the late 1940s:

In the end, ironically, it was Miss Fury’s high fashion wardrobe that became a major source of controversy.

In 1947, no less than 37 newspapers declined to run a panel that featured one of Mills’ tough-minded heroines, Era – a South American Nazi-Fighter who became a post-war nightclub entertainer – dressed as Eve, replete with snake and apple, in a spangled, two-piece costume.

This was not the only time the comic strip was censored. Earlier in the decade, Timely comics had refused to run a picture of the villainess Erica resplendent in her bath – surrounded by pink flamingo wallpaper.

But so many frilly negligées, cat fights, and shower scenes had escaped the censor’s eye. It’s not a leap to speculate that behind the ban lay the post-war backlash against powerful and unconventional women.

Hey, even today, unless it’s a radical left-wing feminist we’re talking about, the social justice movement is against powerful and unconventional women, especially when they’re attractive. I suspect that’s part of what led to the attack on Amelie Wen Zhao and her as of yet unpublished fantasy novel, Blood Heir. I honestly hope she’ll be convinced to go back on her stupid decision to delay the book’s release and publish it unchanged in time, because it’s clear that was all manufactured controversy, just what’s destroyed the “young adult” market. But alas, chances are she’ll allow her career to be halted before it even began.

In wartime, nations had relied on women to fill the production jobs that men had left behind. Just as “Rosie the Riveter” encouraged women to get to work with the slogan “We Can Do It!”, so too the comparative absence of men opened up room for less conventional images of women in the comics.

Once the war was over, women lost their jobs to returning servicemen. Comic creators were no longer encouraged to show women as independent or decisive. Politicians and psychologists attributed juvenile delinquency to the rise of unconventional comic book heroines and by 1954 the Comics Code Authority was policing the representation of women in comics, in line with increasingly conservative ideologies. In the 1950s, female action comics gave way to romance ones, featuring heroines who once again placed men at the centre of their existence. 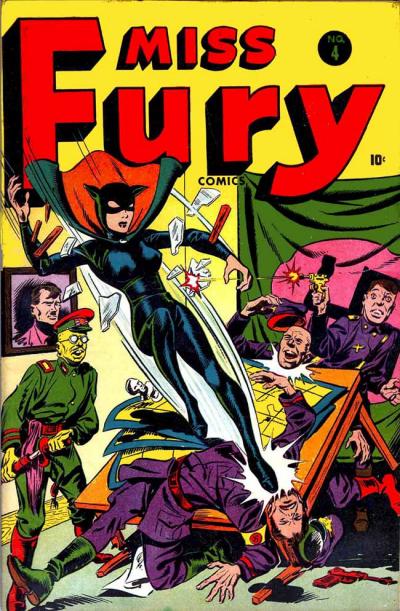 Now isn’t that interesting. Depending how you view this, the Fredric Wertham-spawned censorship mob wound up all but costing women more than they gained in representation. And here’s one part I must take issue with: “conservative”? Given that Wertham was pretty much a liberal supporter himself, that’s why it’s ridiculous to assume this was all the fault of conservatives. Today, Wertham’s hardly ever spoken about in the past 6 years since his plagiarism was discovered, because with the rise of leftist social justice ideologies, it would clash with their obnoxious, entitled beliefs on what entertainment should be like.

This year Mills’ work will be belatedly recognised. As a recipient of the 2019 Eisner Award, she will finally take her place in the Comics Hall of Fame, alongside the male creators of the Golden Age who have too long dominated the history of the genre. Hopefully this will bring her comic creation the kind of notoriety, readership and big screen adventures she thoroughly deserves.

Frankly, I doubt it’ll go past superficial recognition, if Hollywood’s become as flooded with political correctness as it could be. For one thing, this is noticeably an Australian/European site that’s bringing this up (it’s also posted on Australian Broadcasting), not an American one. There had been some US sites that spoke about Black/Miss Fury in the past several months, because Billy Tucci illustrated a new take on the material for Dynamite, but since then, there’s been very little buzz about it as of this writing. On notoriety though, of course it could gain some of that, if radical feminists decide they’re against it.

Anyway, Trina Robbins once spoke about the ridiculous controversy over Mills’ drawings in an interview with Print magazine nearly a decade ago:

The only outrage I have seen were those newspapers that censored Mills’s strip in which she dressed her nightclub entertainer character, Era, in an outfit that would not bother us in the least today. But it obviously shocked the pants – yes, verbal joke intended – off some people.

It wouldn’t bother any but the nastiest, most obsessive modern leftists who are constantly looking to manufacture controversy over nothing. Like, maybe Heather Antos, recalling she was a bad lot when she worked at Marvel, and isn’t likely to change much now that she’s working for Valiant.

So far when I checked the news headlines, this was still the only serious mention of this important part of comics history, and that’s certainly telling if the comics press otherwise isn’t interested in following up on history items like these, proving that truly, the “representatives” today don’t care about tales of capable women, selectively or otherwise, because it all clashes with the twisted narratives they’ve come to embrace as they send the industry into a spiral of destruction. Also, where the article falters, let’s remember, is that it doesn’t get into whether today’s environment is sliding back to what harmed comics and other entertainment in the 1950s. That’s precisely why, even as it provides some interesting history, it still comes up short of the mark.